‘That’s an awfully big dog!’ Drivers do a double-take when ALPACA pokes its head out of car window in Glasgow

This is the bizarre moment an alpaca poked its head out of a car window in Scotland.

Annie the alpaca was spotted sticking her long neck out of the back of a Vauxhall Zafira at traffic lights in Airdrie, near Glasgow, on March 11.

The sight boggled onlookers, including Kirsty Shilliday who took a video of the animal after initially mistaking it for an ‘awfully big dog’.

Annie the alpaca was spotted looking out the window of a Vauxhall Zafira in Airdrie, near Glasgow

In Ms Shilliday’s footage, the curious farm animal looks out of the window of the black Vauxhall while it is stopped at the lights, before trying to pull its head back inside the car when it starts to move.

The hairdresser posted the footage on TikTok, where it has been viewed more than 277,000 times.

Ms Shilliday said the animal ‘looked as if she didn’t have a care in the world’.

‘I genuinely didn’t know what I was seeing at first and I actually had to double-take,’ she told the Daily Record.

‘I was like, “that’s an awfully big dog”. But it definitely wasn’t one.’

The 38-year-old added: ‘It was absolutely mental. I thought to myself, “That’s definitely an alpaca. You’re seeing what you’re seeing and I’m not going off my head.”‘ 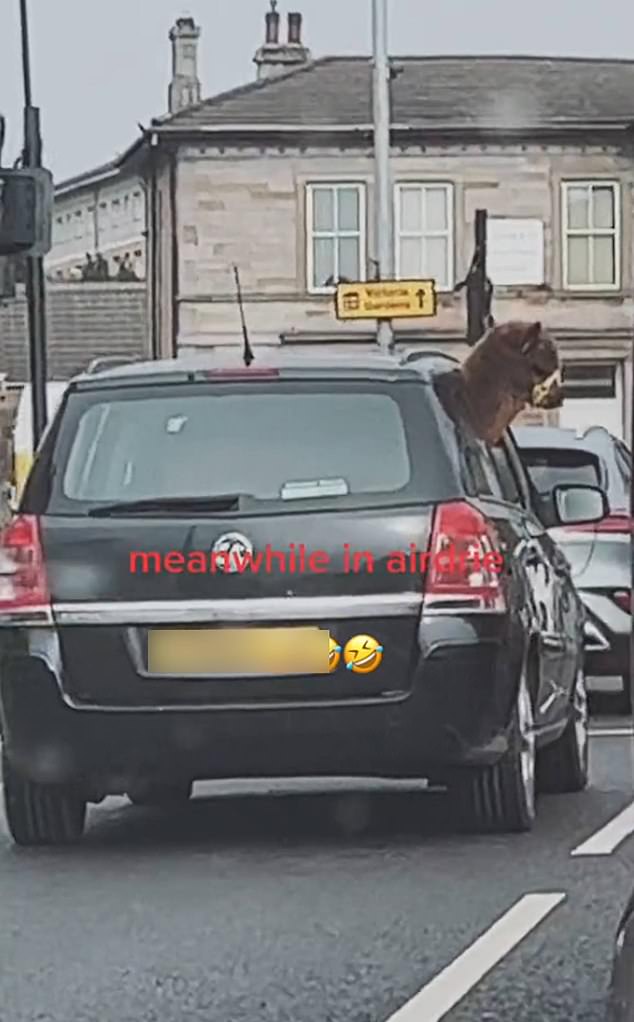 The farm animal was being driven to a high school by staff from Alpaca Trekking Centre, near Thornhill, Stirling

The video prompted the Alpaca Training Centre to respond saying: ‘That’s our Annie!! She loves an adventure hahaha.’

The centre, which is based in Thornhill, near Stirling, posted on its Facebook page that it had taken Annie for a visit to nearby Coatbridge High School and it was on this journey that she had been spotted.

Alpacas are domesticated animals that originate from the Andes mountains in South America.

They are often confused with llamas, which also have long necks and thick fur.

However, alpacas are also much smaller and, unlike llamas, have not been bred to be working animals.

Instead, farmers keep them for their thick fur, which is similar to sheep’s wool and is used to make clothes.