Wing, an offshoot of Google’s parent company, Alphabet, will launch drone deliveries to one of Finland’s most populous areas next month according to a recent blog post from the company.

Pilot deliveries will be rolled out in the Vousari district of Finland’s capital, Helsinki, and will deliver products from gourmet supermarket Herkku foods and Cafe Monami.

As noted by Wing, deliveries will include ‘fresh Finnish pastries, meatballs for two, and a range of other meals and snacks’ that can be delivered in minutes.

Wing will launch deliveries for customers in Finland starting next month. Options will include a variety of foods from a popular cafe and a gourmet grocery store

HOW DOES GOOGLE’S WING DRONE WORK?

Wing, the first commercial drone company approved by the FAA in the U.S. will start delivering in Virginia.

The drones is powered entirely by electric and can fly up to 120 km/h (almost 75 mph).

It emits no greenhouse gas and travels without any human guidance using the company’s AI and machine learning systems.

It can fly vertically and sideways and delivers products to consumers’ lawns by dropping them down safely with a tether.

Wing’s entrance into Vousari will mark a significant step forward for Wing in testing drones’ performance in urban areas, in particular deliveries made to multi-family housing.

According to a municipal website for Vousari, the district contains about 37,000 people and spans an area of almost six square miles — about 15 kilometers.

For Wing, it’s pilot tests in Finland will likely serve as a barometer for more beginning-stage deployments in the U.S.

Last month, Wing became the first commercial drone operations to be green-lit by the FAA to begin making deliveries in Virginia.

The precedent, which was foreshadowed by the FAA’s Unmanned Aircraft System Integration Executive Director, Jay Merkle, last month, is a major step for commercial drones in the U.S. where regulators have been slow to allow widespread usage.

Approval of the drones effectively classified the company as a small aircraft operator — a determination that carries a stringent set of mandatory guidelines.

According to a report from Bloomberg, Wing will begin carrying out deliveries in two towns in the state of Virginia — Blacksburg and Christiansburg — as it hammers out details of the company’s operations.

It will start by partnering with local businesses to deliver products to those areas.

Though Wing has been approved by the FAA, the company says it will work with local governments to determine where and how its drones are deployed.

Wing also received permission from regulators in Australia regulators who began allowing public delivers from the company in April. 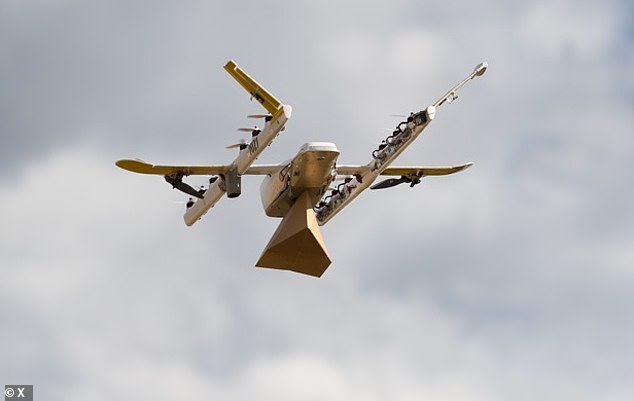 It’s unclear what Wing will deliver to its first U.S. location but the company says it will focus on local products according to a Bloomberg report

The helicopter-like vehicles are completely autonomous and capable of flying up to 120 km/h (75 mph) using an all-electric power source with zero emissions.

Customers use a mobile app to cue up deliveries of products which are flown to their house and safely lowered to their lawn using the drone’s tether.

Its strides have outpaced that of Google’s main competitor in the commercial drone space, Amazon, whose service, Prime Air, plans to deliver the company’s products straight to consumers doorsteps.

As noted in a Bloomberg report, many other companies have received waivers  from the FAA to begin testing drones on a limited scale, but none have gone through the rigorous FAA process of being approved as an aircraft operator.

For other hopefuls in the space, Wing will likely represent a template of what works and what doesn’t as the technology expands to more densely populated areas.