Alphonso Davies declares himself ‘ready to start’ vs. Belgium after previous injury scare

Alphonso Davies declares himself ‘ready to start’ vs. Belgium after suffering a hamstring scare while with Bayern Munich, as left-back readies for first World Cup appearance

Canada star Alphonso Davies has declared himself fit for the Maple Leafs’ opening match of the World Cup vs. Belgium after suffering a previous injury scare on club duty.

Davies left Bayern Munich’s November 5 game vs. Hertha Berlin holding his hamstring after a non-contact injury, sparking concern that the 22-year-old would not be healthy for the tournament.

But in an interview with TSN television on Sunday, the left-back/winger assuaged any fears that he wasn’t ready to play in Qatar.

‘I’m feeling good, I’ve been working to come back, and I’ve taken good care of myself,’ he said.

Davies said 10 days ago that he would need two weeks of rehab for the injury to be ready for the tournament, and it appears he’s pulled off that tight timeline before Canada’s Wednesday opener. 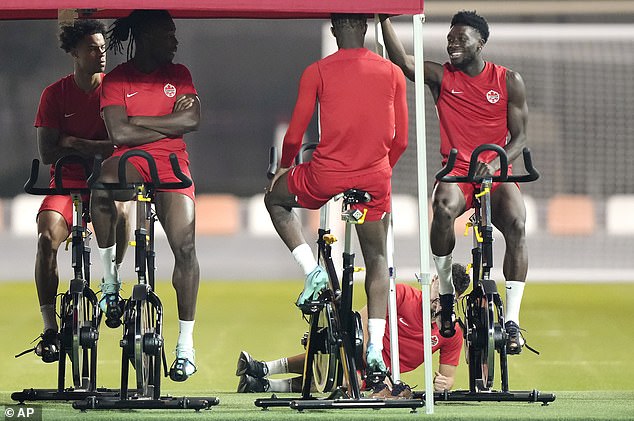 He previously called his knock a ‘scary situation.’

After playing Belgium on Wednesday, Canada will face Croatia and then Morocco to close out Group F.

It’s the first World Cup that Canada have qualified for since 1986, and just their second ever.