Olympian Aly Raisman has shared how she is able to keep believing in ‘magic’ following the trauma she suffered from disgraced doctor Larry Nassar.

The 25-year-old gymnast sat down with Today’s Hoda Kotb to discuss a quote she believes in and strives to incorporate into her life: ‘Those who don’t believe in magic will never find it.’

‘I really like this quote because I’ve been doing a lot of work on myself, self-reflection. And I think it’s a normal thing,’ she said. ‘Some days you just wake up in the morning and you kind of just feel blah…and then there are other days where you feel really good.’

Moving on: Aly Raisman who announced her retirement from gymnastics earlier this month, shared how she still believes in ‘magic’ despite her experience with trauma 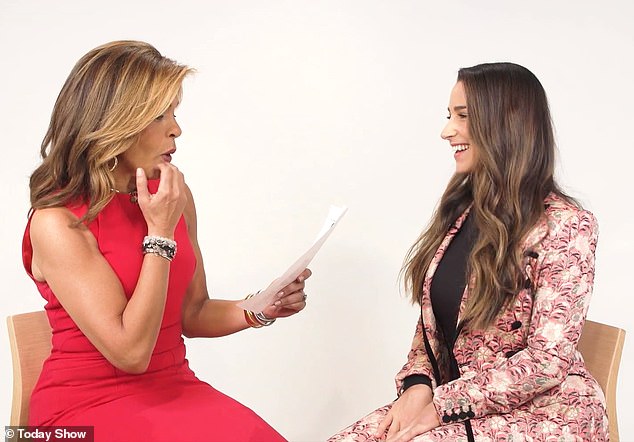 Her perspective: The 25-year-old spoke to Today’s Hoda Kotb about her belief in ‘magic’ post-trauma 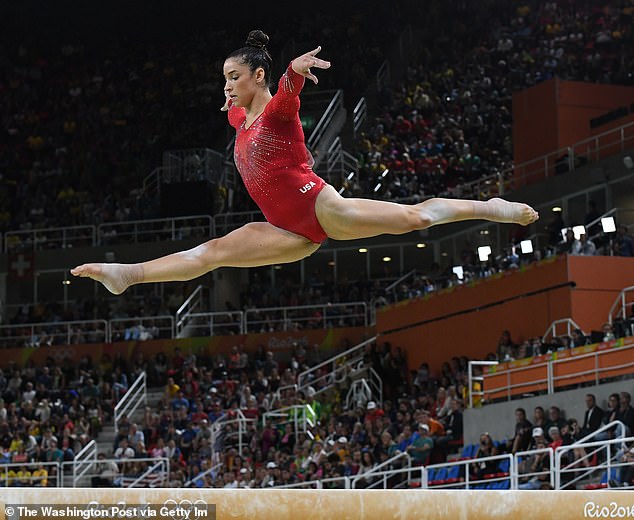 Positive: ‘Every day I feel differently,’ Raisman said. ‘I’ve done so much therapy, I continue to do a lot of therapy. Working on myself. Just finding things that make me feel good’

Kotb, 55, asked Raisman how is was able to find magic after overcoming the abuse she experienced at the hands of the Olympic doctor, who was sentenced in 2018 to more than 140 years in prison on 10 counts of sexual abuse.

‘Every day I feel differently,’ Raisman said. ‘I’ve done so much therapy, I continue to do a lot of therapy. Working on myself. Just finding things that make me feel good.’

One word of advice Raisman offered up was to always embrace each day instead of falling into the trap of routine.

‘You can wake up and live every day as if it’s a miracle,’ she said. ‘Everything you see is really special and trying to be present and cherish the moments.’

Kotb said she thought Raisman looked like she always believed in magic based on past video footage showing the gymnast practicing at just eight years old.

Raisman replied that her pride and belief in her skill came largely from the support system surrounding her. 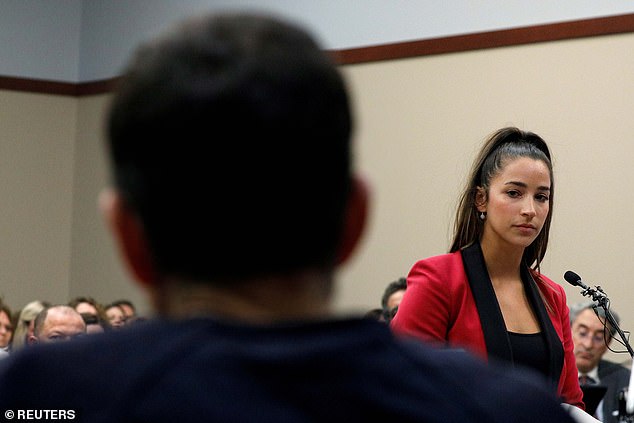 Making her voice heard: The gymnast was sexually abused by former Olympic doctor Larry Nassar. She spoke against him during his trial 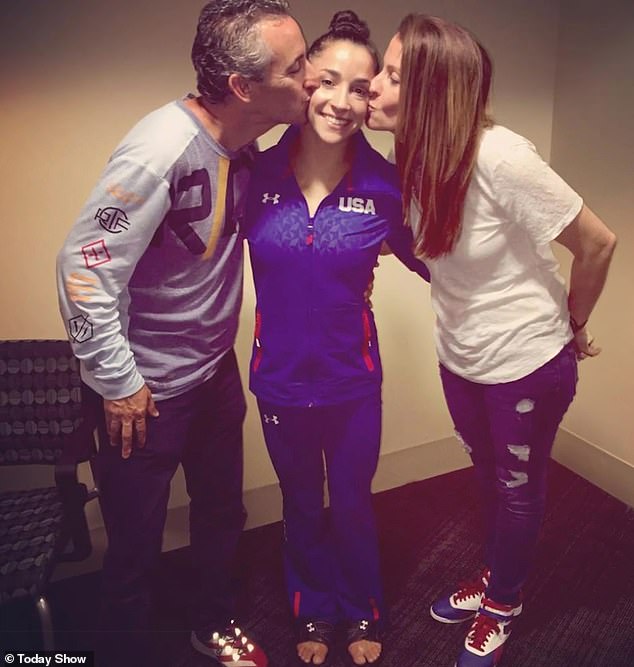 All the love: Raisman (pictured with her parents) said her pride and belief in her skill came largely from the support system surrounding her 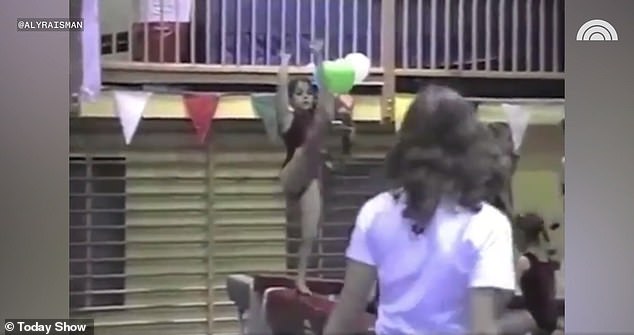 Making her mark: She believed at a young age she had what it takes to make it to the Olympics

‘As a young girl I was very lucky to have the support of my family,’ she said. ‘Just throughout my gymnastics career I had a lot of really great coaches who were supportive and believed in me.’

She added: ‘I experienced bullying as a younger kid. There was other coaches that didn’t think that I could do it. But as long as you have one person that believes in you, I think there’s a lot of magic in that.’

I honestly look back now and it makes me sad because I forgot how to have fun. I think I barely laughed the entire year

A new goal for Raisman is to wake up before the sunrise each day to appreciate the special moment. She also wants to look towards the sunset in the evenings as a moment of pause during the day.

This comes after she previously told Kotb and co-host Jenna Bush Hager how she felt she didn’t embrace her life during the Nassar trial.

‘I honestly look back now and it makes me sad because I forgot how to have fun,’ she said. ‘I think I barely laughed the entire year. So now I am making the effort to have fun, really figure out what makes me happy, and surround myself with good people.’

Kotb asked Raisman how she has been able to find joy in the last couple years after dealing with the abuse she experienced from Nassar.

The gymnast confronted the former Olympic doctor in January 2018 while he was on trial, standing up against the abuse she received from the man when she was just a young girl.

While she is learning to move past the abuse, Raisman said she didn’t want anyone to think she never has bad days. 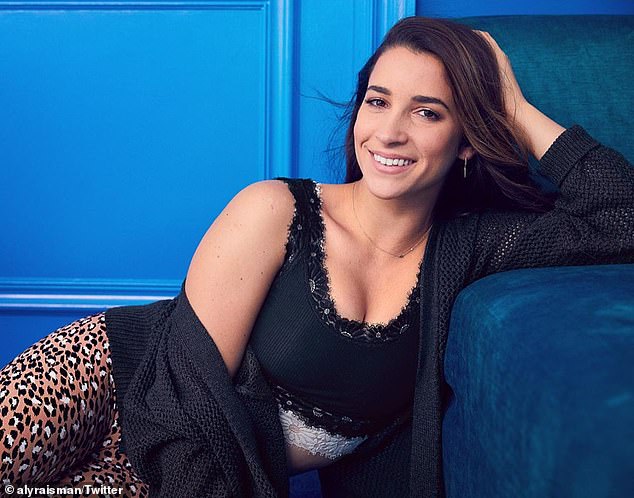 Priority: She said therapy and having a great team has helped her move forward from the sexual abuse she suffered from disgraced Olympic doctor Larry Nassar 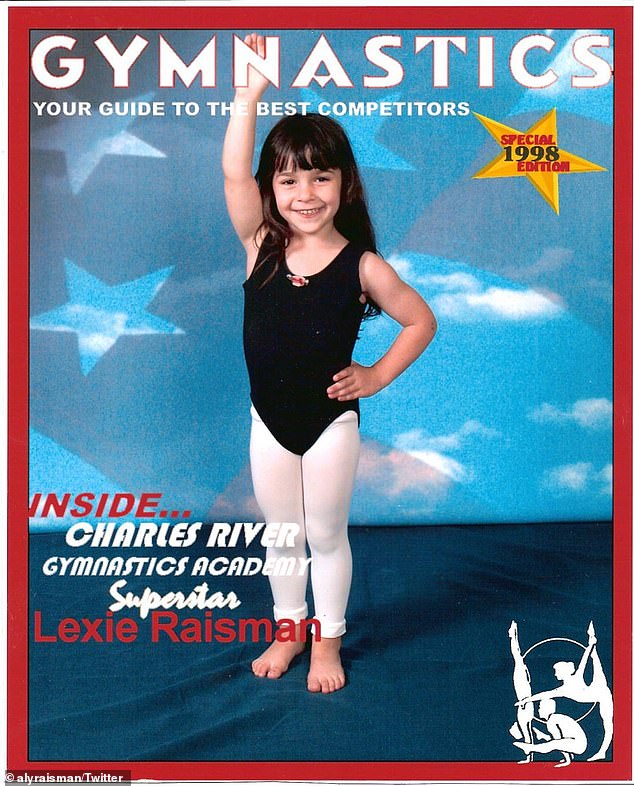 Heartfelt: When announcing her retirement earlier in January, Raisman revealed what she would say to her eight-year-old self (pictured) now

‘I want people to know that my life is not perfect, there is no such thing as that. And I think every day I feel differently. Some days I wake up and I feel better, other days it’s a little bit harder to think positively,’ she said.

Rumors circulated that Raisman was retiring from gymnastics in recent months, but she didn’t officially make the announcement until January.

Dpeaking on Today, she said she was thinking about retirement ‘a lot lately’, specifically in the last couple of months. Her written statement included a section where she detailed what she would tell her eight-year-old self.

‘I’ve been doing a lot of self-reflection, and I found thinking about things I would say to my younger self has been really healing and therapeutic,’ Raisman said.

‘It’s been a really peaceful feelings. It just kind of inspired this letter and this idea. I really wanted to be honest. I’ve tried to share as much of my journey with the fans as possible and this just felt like where I am right now.’

The statement revealed that she was retiring from the sport before going into what she would tell her younger self.

‘I envision her eyes lighting up and a smile spreading across her face as she learns she will one day be like those gymnasts she watched on TV, and that she will inspire some other little girl to cartwheel around her house, dreaming of one day competing at the Olympics,’ she wrote.

‘The power of dreams is too big to put into words, but I’d try anyway since it is what makes magic happen. It’s also what will get her through the tough times.’ 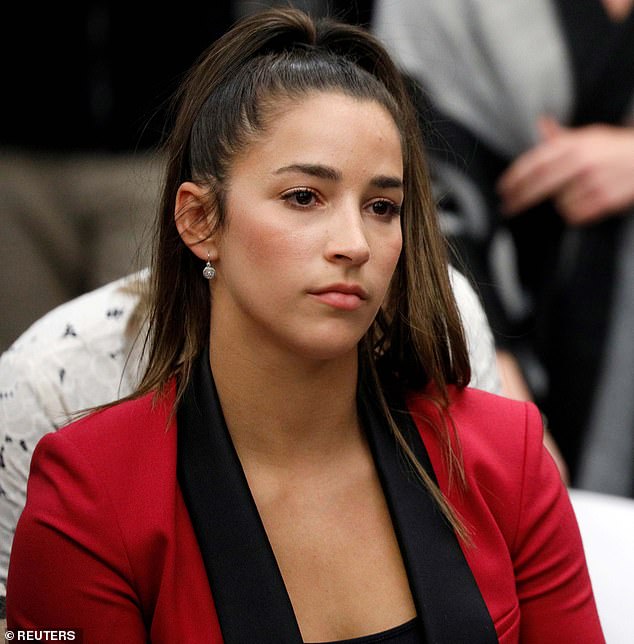 Fighting back: The decision comes after the last couple years was spent with Raisman speaking out against Nassar and his abuse 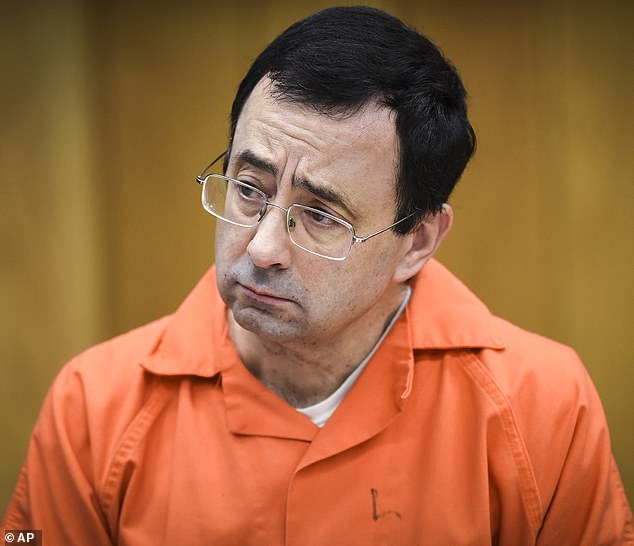 Disgraced: The doctor went to trial from 2017 and into 2018. He was sentenced 140 years in prison on 10 counts of sexual abuse. More than 250 women came forward against the doctor

Raisman struggled with if she would also want to inform her younger self about the tougher times in the industry.

‘I really struggle when I think about whether I’d tell her about those tough times,” Raisman wrote. ‘I wonder if I would tell her that life would be filled with ups and downs, and that there are people in the sport who will fail to protect her and her teammates.

‘It would be so hard to tell her that, but I would make sure she knows she will get through it and she will be OK.’

Nassar was a former campus sports physician who also worked for USA Gymnastics, which trains Olympians.

Raisman has been a powerful supporter for sex abuse survivors and used her platform speak out against USA Gymnastics for employing a man like Nassar. Her retirement comes as the organization struggles to gain back trust among its athletes.