USA Gymnastics is facing intense criticism from former gymnasts after hiring Mary Lee Tracy as the organization’s elite development coordinator because the long-time coach defended Dr. Larry Nassar from allegations of sexual abuse in 2016 – two years before he was found guilty of molesting hundreds of young athletes.

Tracy was interviewed at the time because she owns the Cincinnati Gymnastics Academy, where pedophile coach Ray Adams worked part time before being sentenced to 20 years in prison in 2013. But while she did not defend Adams in the 2016 interview with WCPO Cincinnati, she spoke highly of Nassar, who at that time had been accused by over 50 female gymnasts of abuse.

‘My Olympians have all worked with Larry,’ Tracy told WCPO in 2016. ‘We were all defending him because he has helped so many kids in their careers. He has protected them, taken care of them, worked with me and worked with their parents. He’s been amazing.’ 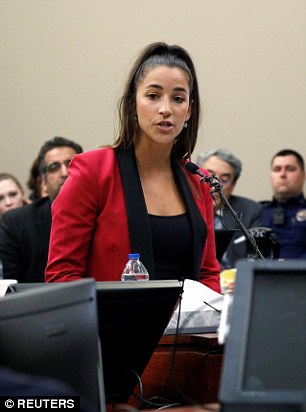 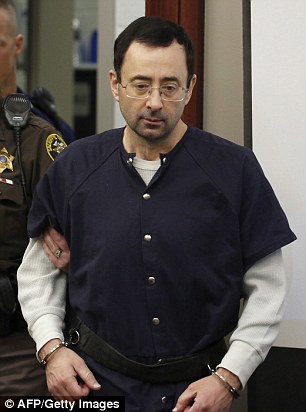 Two-time Olympian and Nassar victim Aly Raisman (left) did not hesitate to rebuke USAG for their decision, accusing the organization of failing to make meaningful changes in the wake of Larry Nassar’s sentencing. Nassar (right) is serving 175 years for molesting hundreds of girls 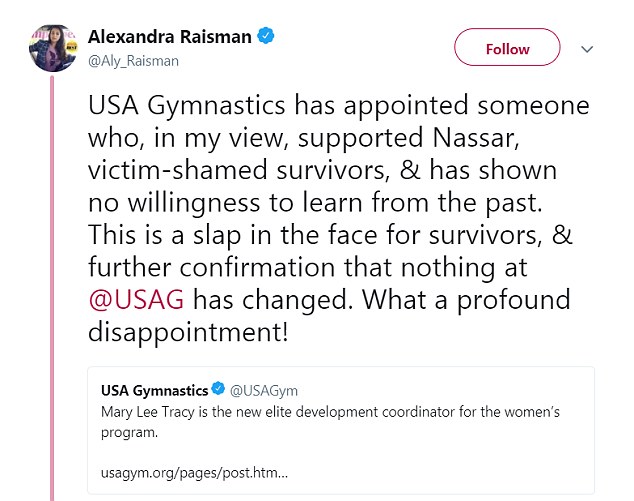 Two-time Olympian and Nassar victim Aly Raisman did not hesitate to rebuke USAG for their decision.

‘USA Gymnastics has appointed someone who, in my view, supported Nassar, victim-shamed survivors, & has shown no willingness to learn from the past,’ Raisman wrote on Twitter. ‘This is a slap in the face for survivors, & further confirmation that nothing at @USAG has changed. What a profound disappointment!’

Raisman also retweeted a post as a reminder that Nassar had been accused by nearly 50 gymnasts at the time of Tracy’s comments.

Chelsea Kroll Williams, another former gymnast who was abused by Nassar, also attacked the decision to hire Tracy, whom she felt supported Nassar. 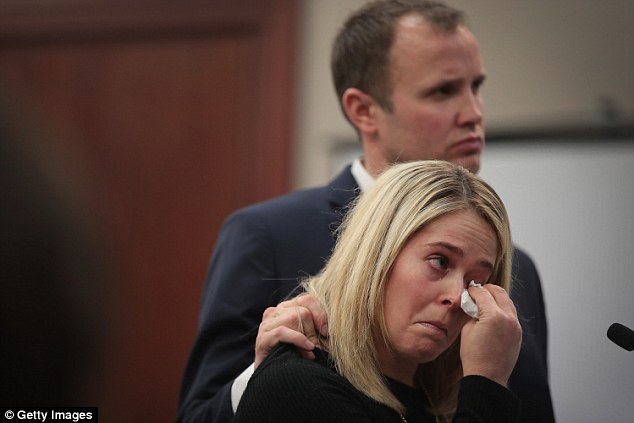 With her husband by her side, Chelsea Kroll Williams delivers a victim impact statement at the sentencing hearing for Larry Nassar who has been accused of molesting more than 100 girls 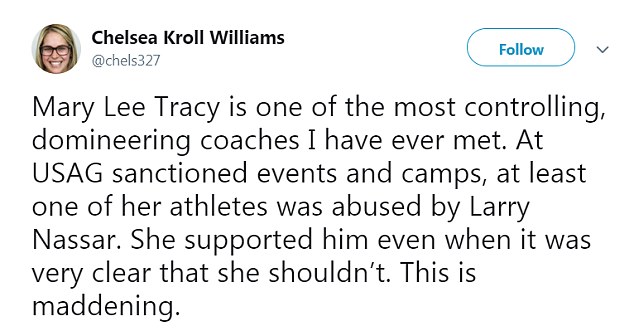 Williams ripped USAG’s hiring because, she says, ‘Tracy is one of the most controlling, domineering coaches I have ever met.’ She also criticized Tracy’s support of Nassar

‘Mary Lee Tracy is one of the most controlling, domineering coaches I have ever met,’ Williams tweeted. ‘At USAG sanctioned events and camps, at least one of her athletes was abused by Larry Nassar. She supported him even when it was very clear that she shouldn’t. This is maddening.’

A USA Gymnastics spokeswoman did not immediately respond to the Daily Mail’s request for comment.

In a press release announcing the hiring of Tracy on Tuesday, the organization highlighted her experience in the field.

‘A member of the USA Gymnastics Hall of Fame, Tracy has owned Cincinnati Gymnastics for more than 35 years,’ read the release. ‘She has coached more than 25 members of the U.S. Women’s National Team, including four Olympians and five World Team members.

‘Her coaching accomplishments include head coach of the women’s 1996 Olympic Team, five-time Region 5 Coach of the Year, three-time USA Gymnastics Women’s Coach of the Year, and coaching at two Olympic Games and seven World Championships. She has also coached numerous Junior Olympians. Tracy has also been active administratively, serving as Region 5 regional chairman and on the International Elite Committee, and as a clinician and speaker.’ 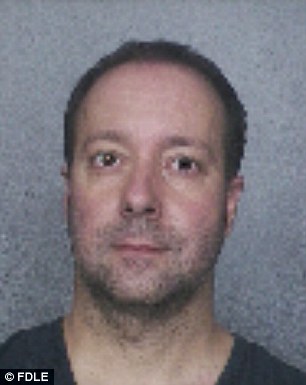 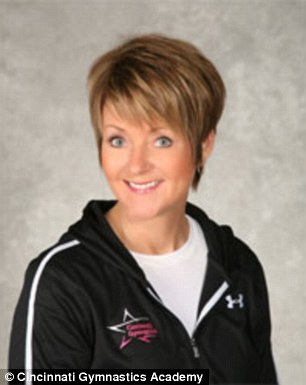 Tracy (right) was interviewed in 2016 because she owns the Cincinnati Gymnastics Academy, where pedophile coach Ray Adams (left) worked part time before being sentenced to 20 years in prison in 2013. But while she did not defend Adams, Tracy spoke highly of Nassar, who at that time had been accused by over 50 female gymnasts of abuse

The NCAA has cleared Michigan State University of any rules violations in the Larry Nassar sexual-assault scandal, the school announced Thursday.

Athletic director Bill Beekman said the university ‘cooperated fully with the inquiry’ and welcomes the NCAA’s conclusion. The school said it got a letter this week from the NCAA’s vice president for enforcement, Jonathan Duncan.

Nassar, 55, pleaded guilty to assaulting girls and women while working as a campus sports doctor for Michigan State athletes and gymnasts in the region. Victims included U.S. Olympians who trained at Indianapolis-based USA Gymnastics. He has been sentenced to decades in prison in three separate cases involving assault and child pornography. 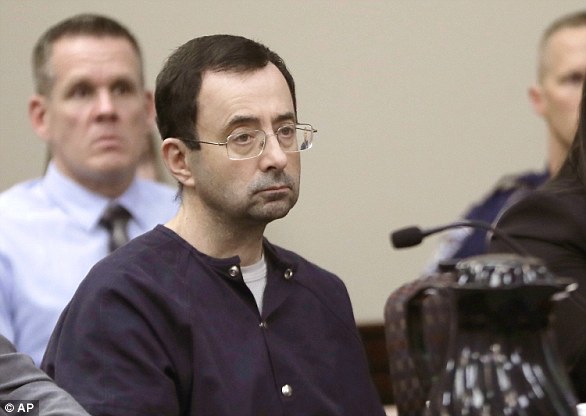 Duncan’s letter said, ‘It does not appear there is a need for further inquiry,’ according to Michigan State.

‘While we agree with the NCAA that we did not commit a violation, that does not diminish our commitment to ensure the health, safety and wellness of our student athletes. That pledge permeates everything we do as part of a larger university commitment to making MSU a safer campus,’ Beekman said in a statement.

Michigan State has denied that anyone covered up Nassar’s crimes. But former athletes say various campus staff downplayed or disregarded their complaints about him.

The university in May reached a $500 million settlement with hundreds of women and girls who said they were assaulted by Nassar.

Former gymnastics coach Kathie Klages, a longtime Nassar ally, appeared in court Thursday on charges of lying to investigators. Klages is accused of denying that gymnasts had ever complained of assaults by Nassar. Authorities say two teens complained to her back in 1997.

Separately, the university said the NCAA found no violations in how the football and basketball teams responded to assault allegations against players. 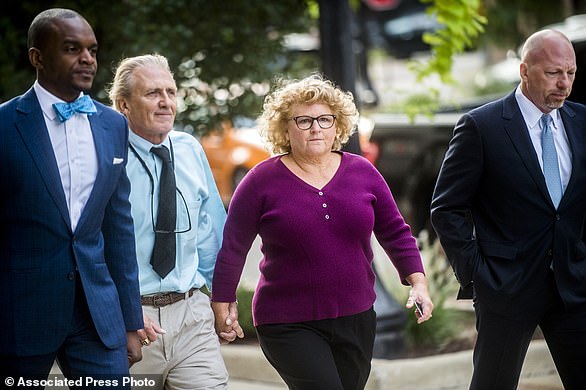 Former gymnastics coach Kathie Klages (in purple), a longtime Nassar ally, appeared in court Thursday on charges of lying to investigators. Klages is accused of denying that gymnasts had ever complained of assaults by Nassar. Authorities say two teens complained to her back in 1997