Alyssa Milano talks about being at Kavanaugh hearing

Alyssa Milano said the rage coming from Brett Kavanaugh during his senate hearing on Thursday was palpable.

The actress and activist was among those listening to testimonies from Kavanaugh and his accuser Christine Blasey Ford after she came forward with allegations that the judge sexually assaulted her when they were teenagers in the 1980s.

Milano, who was there to support Ford, told Cosmopolitan magazine that several people got up and left the room when Kavanaugh walked in. She said other people gasped.

According to Milano, Kavanaugh’s rage radiated from him as he took his seat in front of the Senate Judiciary Committee.

‘I couldn’t see his face. All I could see was him pouring water and his back moving up and down as he breathed really deeply, almost like an animal,’ she said. ‘But I could hear him – his anger and his rage. And I could feel it.’

Alyssa Milano, who was at the Brett Kavanaugh hearing on Thursday, said she ‘could feel’ the rage coming off him 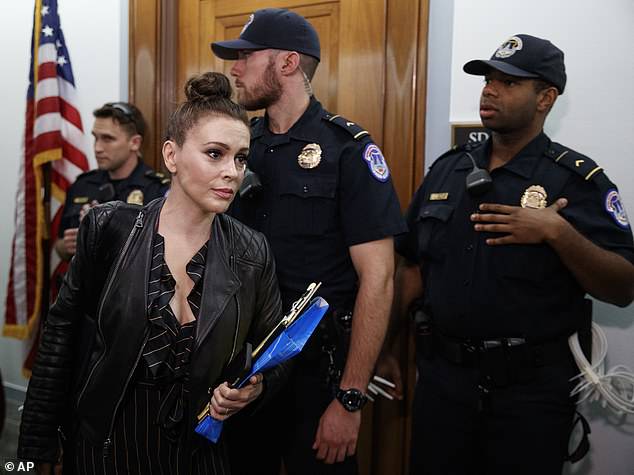 Milano described the hearing as ’emotional’ and said she felt defeated when she left. The actress is pictured leaving Thursday’s hearing

Milano said Kavanaugh was ‘volatile and emotional’ during the hearing. He took a combative tone with Sen. Dianne Feinstein (D-Calif.) and talked over her as she tried to question him on the assault allegations.

‘I was just sitting there thinking to myself: “If a woman had acted like this during a line of questioning, she would be considered totally unhinged or hormonal or accused of having a meltdown, or worse, being a b****,’ Milano told the outlet.

‘So, watching him I just felt like, this guy does not have the temperament to be on the Supreme Court, regardless of the allegations.’

Milano, who was called out for filming the hearing on her cell phone. described the experience as ’emotional’ and said she felt defeated when she left.

‘I was sitting next to Senator Kristen Gillbrand, and at one point she passed me a tissue. I rubbed her back. It was a moment of solidarity for the women who were present. It was heavy,’ she said.

‘I think if the testimonies were swapped – if Kavanaugh had gone first and we had left after Dr Ford’s testimony – I would have felt better. But when I left, I felt total defeat.’ 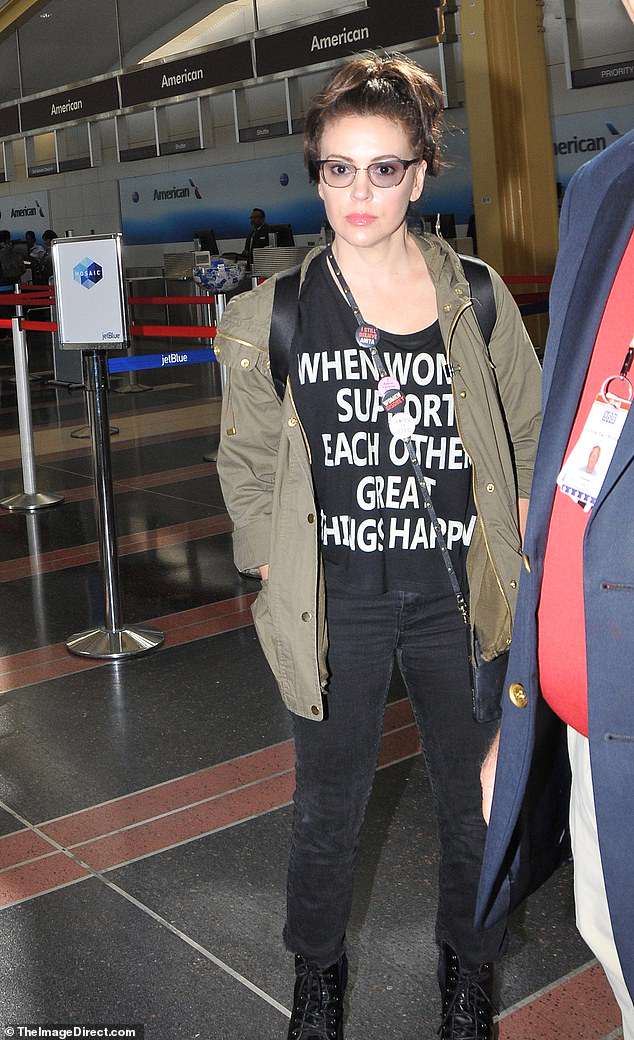 Milano, pictured at the airport leaving DC following the hearing, was there to support Kavanaugh’s accuser Christine Blasey Ford

Ford, pictured at Thursday’s hearing, accused Kavanaugh of sexually assaulting her when they were teenagers

The actress also said the way Ford has been treated is an example of why women don’t report sexual assault.

She added: ‘But that doesn’t mean we can’t continue to raise our voices, tell our stories, to come together as women, to volunteer for candidates who believe women and will support them. November is coming – and we will vote.’

Kavanaugh’s confirmation was thrown into doubt on Friday when the White House and Republicans agreed to delay the vote for one week so the FBI can investigate the allegations.

Trump, who nominated Kavanaugh for Supreme Court, said in a statement on Friday that he ordered the FBI ‘to conduct a supplemental investigation to update Judge Kavanaugh’s file’.

‘As the Senate has requested, the update must be limited in scope and completes in less than a week,’ he said.