A head device that zaps the brain with electromagnetic waves appears to have reversed the effects of Alzheimer’s in a trial.

It involved them wearing a skullcap of magnets which sent electric pulses to break down build-ups of proteins known to stop nerve cells working properly.

Seven of the patients showed a ‘highly significant improvement’ in tests of their memory, language, attention, behaviour and moods.

Researchers hope the promising results could be the start of a breakthrough in Alzheimer’s research, which has faced massive roadblocks in its quest for a cure. 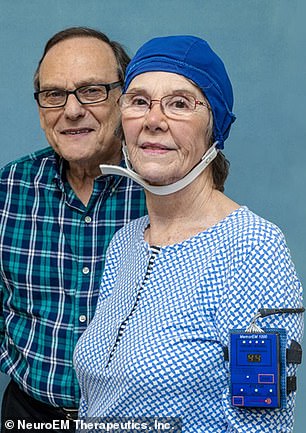 The device is worn as a skullcap which contains electromagnets attached to a power pack. The eight patients in the trial (Pictured, one of them with her husband – neither of whom have been named) all had two hour-long sessions of the TEMT each day for two months

NeuroEM Therapeutics, a private company which develops the TEMT headsets in Arizona, carried out the small trial.

Its results have been so promising, it said, that the trial was extended for 17 months because the patients didn’t want to give the equipment back.

During the tests patients used the TEMT headsets twice a day for an hour at a time.

TEMT works by breaking up toxic clumps of proteins called amyloid-beta and tau, the formation of which is thought to be the cause of Alzheimer’s.

When these are cleared, previously-blocked nerve cells in the brain are, in theory, able to return to functioning as normal.

INJECTIONS ‘SIGNIFICANTLY’ IMPROVE THE MEMORIES OF MICE WITH ALZHEIMER’S

Scientists have discovered a natural compound which has shown promise in tackling Alzheimer’s disease in mice.

Injecting the creatures with something named AC253 every day for five weeks, researchers at the University of Alberta found, ‘significantly’ improved their memories.

AC253 was made of two strings of amino acids – which are the building blocks of everything in the body – which appeared to halt the effect of a damaging plaque which builds up in Alzheimer’s patients’ brains.

The compound, however, needs to be given in large amounts to work, which could trigger the immune system to get rid of it. The scientists now want to develop a smaller, pill version of AC253 which could be trialled in humans.

Professor Jack Jhamandas said: ‘Occasionally you come across a discovery that has the potential to change the game in a very fundamental way, like hitting a home run, and I’m very excited that we are really on to something here.’

The research was published in the journal Scientific Reports.

The NeuroEM team say they have evidence this works but the extent to which it will be able to reverse or prevent the decline caused by Alzheimer’s isn’t known.

In this study the patients were measured on the ADAS-cog scale of 0-70, which measures the severity of Alzheimer’s with a higher number worse for the patient.

After two months all but one of the patients showed an improvement of at least four points on the scale, which was considered clinically significant.

Alzheimer’s patients can usually expect to see their score worsen by about four points a year, the researchers said, suggesting the TEMT had turned back the clock a year on their disease.

The people in the trial also performed better – in one instance 50 per cent better – on word recall tests.

‘We were particularly surprised that this highly significant improvement in the ADAS-cog was maintained even two weeks after treatment was completed,’ said Dr Gary Arendash, the company’s chief executive officer.

‘The most likely explanation for continued benefit after cessation of treatment is that the Alzheimer’s disease process itself was being affected.

‘Perhaps the best indication that the two months of treatment was having a clinically-important effect on the AD patients in this study is that none of the patients wanted to return their head device after the study was completed.’

Alzheimer’s disease is the most common form of dementia and the NHS estimates it affects as many as one in six people over the age of 80 and one in 14 over-65s.

It is sometimes masked as ‘just getting older’ but is a progressive, medical disease which is ultimately fatal.

None of the patients suffered any damaging side effects from the treatment, NeuroEM confirmed, and the firm now hopes to widen trials to 150 people.

If the treatment turns out to be successful it could go where drugs have been unable to tread.

More than 150 trials of medications have failed since 1998 as scientists struggle to get any effective medicines into the brains of patients before the devastation is too great.

Experts said a difficulty in testing drugs on the right people may be partly to blame – Alzheimer’s is rarely diagnosed before it has taken hold and, by that time, it is often too late or studying people becomes too difficult.

For drugs which try to modify the course of a disease, trials often have to be longer and more in-depth, making them more difficult and costly.

The NeuroEM team published their findings in the Journal of Alzheimer’s Disease.

THE WAR ON ALZHEIMER’S: MORE THAN 150 TRIALS HAVE FAILED IN 20 YEARS

Scientists have for years been scrambling to find a way to treat or prevent Alzheimer’s disease, which accounts for around two thirds of the 50million dementia patients worldwide.

But attempts to tackle the brain-destroying disease have been beset with failures.

In March this year the pharmaceutical company Biogen abandoned two late-stage trials of a promising Alzheimer’s drug, aducanumab, which it hoped would work by clearing the brain of sticky build-ups.

After years of research and testing the company decided its prospects looked poor in the end stages of a human trial and pulled the plug, wiping $18billion (£13.8bn) off its own market value.

In January, the firm Roche announced it was discontinuing two trials which were in their third phase of human testing.

It was trying to develop crenezumab, which worked by preventing build-up of plaques in the brain and had already been proven safe, but wasn’t having the desired results.

Between 1998 and 2017 there were around 146 failed attempts to develop Alzheimer’s drugs, according to science news website, BioSpace.

Billions of dollars have been invested in the industry and a successful, marketable treatment would likely make a fortune for the company which gets there first.

Experts have said a difficulty in testing drugs on the right people may be partly to blame – Alzheimer’s is rarely diagnosed before it has taken hold and, by that time, it is often too late or studying people becomes too difficult.

For drugs which try to modify the course of a disease, trials often have to be longer and more in-depth, making them more difficult and costly, researchers wrote in the journal Expert Opinion on Investigational Drugs.

The same researchers added scientists may be struggling to find the correct dose of drugs which could work, and that they may be recruiting the wrong types of people to test them on.