Alzheimer’s Disease: Hopes as treatment extends lifespan of flies by 8.8%

A genetic treatment has been developed that leads to fruit flies living as much as nine per cent longer.

Two therapies were created which each target a protein and they both were found to stave off signs of Alzheimer’s as well as elongating healthy lifespan.

While the findings raise the possibility of replicating the treatments in humans, such genetic therapies are currently prohibited on ethical grounds, despite an ongoing debate about potential benefits.

Pictured, a picture of a fruit fly brain that has been altered so that it certain proteins glow. In this picture the yellow dots are the damaging protein p62/REF2P and the magenta is poly-ubiquitin. A similar technique was used to track FKH and FOXO

Editing the genes of embryos is not yet safe for humans, according to a new report published by the world’s leading experts in fertility, ethics and biology.

Germline gene editing is a process where faulty, diseased, or undesirable genes in an embryo, sperm of egg are removed, altered or replaced by scientists.

This system is extremely powerful and the changes made are not only permanent, but will be passed down the generations.

However, this landmark report says not enough is known about the safety or precision of the process for it to be trialled in humans.

Advocates of human germline genome editing are pushing for the procedure to be investigated, as it has the ability to allow babies destined to inherit life-threatening conditions to be born disease-free.

The topic of gene editing embryos to ‘customise’ a baby has been at the forefront of science since the shock announcement in 2018 that a rogue scientist in China had used the powerful gene-editing tool Crispr on a pair of twin girls.

Currently, editing the DNA of a human embryo is not allowed in the US, thanks to a 2017 ruling by the international committee of the National Academy of Sciences.

Crispr-based experiments on human embryos were approved in the UK in 2016 with the stipulation they are never transplanted to create a pregnancy and must be destroyed after a week.

Researchers from UCL altered the genetics of fruit flies — a common animal in lab studies — with extra chunks of DNA inserted into their genome.

These alterations were specifically designed to promote expression of genes responsible for the production of two proteins.

In turn, these proteins, called forkhead (FKH) and forkhead-box-O (FOXO), act on neurons and glial cells in the brain, respectively.

Neurons carry electrical impulses around the nervous system and make up the brain’s grey matter whereas glial cells do not carry signals and make up the white matter of the organ.

Both proteins are very similar in shape and function, and bind to DNA, turning  sections of the genome ‘on’ or ‘off’.

The team of scientists were studying fruit flies to learn more about the impact insulin has on the body and ageing.

Co-lead author Dr Nathan Woodling told MailOnline: ‘Insulin is very important to development, but it appears that we may have too much of it late in life.

‘Insulin signalling likely developed through evolution due to its benefits early in life, in spite of its detrimental effects later in life.’

Their research revealed flies have various chemicals and mechanisms to help regulate the response to insulin, which itself helps the body deal with sugar.

They then honed in on FKH and FOXO due to their similarity to proteins seen in humans brains.

By studying the impact they had on the fruit flies the researchers got an idea of what their impact may be for human health.

Their research involved creating genetically altered flies with elevated and depleted levels of both proteins.

It revealed overexpression of FOXO leads to a ‘significantly increased healthy lifespan’ of 8.8 per cent.

For the neuron-targeting FKH, overexpression elongated healthy lifespan by 6.6 per cent.

The treatments also reduced the buildup of amyloid, harmful brain proteins which are a hallmark of Alzheimer’s disease.

‘The neuronal treatment protected fly brains against the damage caused by amyloid-beta, one of the proteins thought to cause Alzheimer’s disease,’ Dr Woodling says.

‘The treated flies in that experiment had improved motor behaviour and fewer protein aggregates in their brains, which suggests that a longer lifespan was accompanied by protection from one of the causes of dementia.’

Dr Woodling says the genes involved in the experiment have equivalents in humans which are very similar. 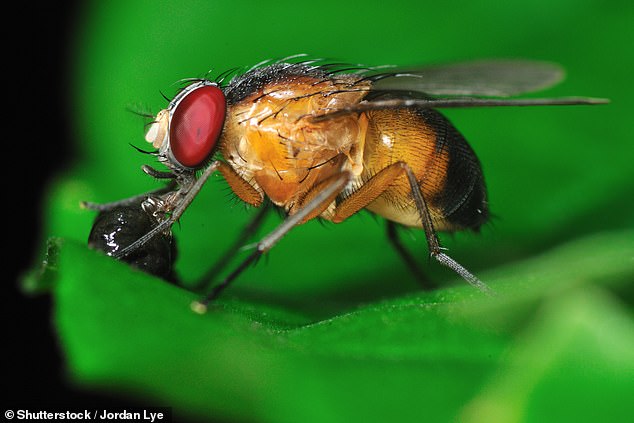 A genetic treatment has been discovered which extends the lifespan of fruit flies by as much as nine per cent. Two different therapies which target different proteins were created and found to also stave off signs of Alzheimer’s (stock)

There are also several drugs which target the insulin signalling network, so modifying an approved treatment to target these genes in people may be possible in the future.

‘Studies on human cells would therefore be a crucial step before taking these findings into clinical use,’ he says.

While the study identified a clear link between the genetic treatment and increased lifespan, how it did this remains unknown.

‘Our best hypothesis at the moment is that these treatments help increase a process called autophagy (which literally means self-eating) in neurons, so that the cells can degrade and recycle the aggregates of protein that build up when there is too much amyloid in the brain,’ Dr Woodling told MailOnline.

‘This is a particularly interesting direction for us, since a number of clinically approved drugs can increase autophagy, but we do not know yet whether these drugs could successfully be used to treat Alzheimer’s disease.’

The full findings are published in PNAS.