Doctors are concerned that NSW’s revised ‘roadmap’ out of Covid-19 restrictions could see the state relaxing too quickly.

The Australian Medical Association of NSW said changes to the state’s plan to exit lockdown could overwhelm the hospital system with virus cases and burn out healthcare workers.

‘We’ve got a new premier in the driver’s seat, but that’s not a good enough reason to deviate from the course previously set,’ AMA NSW President Danielle McMullen said.

‘Keeping people safe must be the premier’s top priority.

‘Relaxing restrictions too soon will not be a “popular” decision if it means the number of people contracting the virus and ending up in hospital skyrockets.’

After meeting with the crisis cabinet on Wednesday, when the state reached a 70 per cent double-dose vaccination milestone, Mr Perrottet announced the changes, with the state to emerge from months of lockdown on Monday. 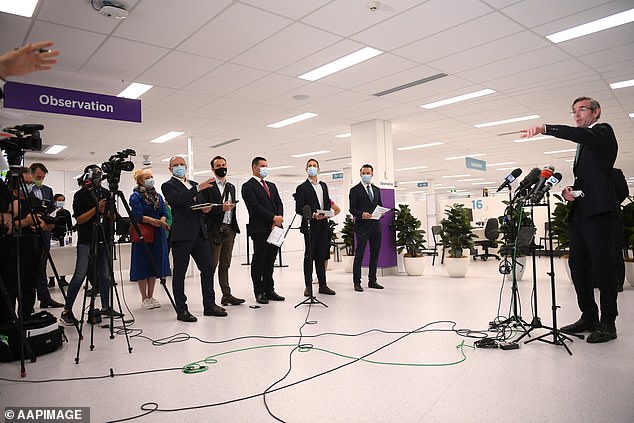 While the AMA NSW urged the premier to ‘pump the brakes’ on the easing of restrictions, Prime Minister Scott Morrison and lobby group Business NSW welcomed the state government’s road map changes

Masks also won’t be required in office buildings in an attempt to encourage workers back to Sydney’s CBD.

These freedoms will apply only for the fully vaccinated until December 1, when freedoms are restored for the unvaccinated.

‘With NSW passing the 70 per cent double vaccination rate threshold … Australians are beginning to get their lives back,’ Mr Morrison said.

However the hospitality sector had mixed feelings, with Restaurant and Catering Australia disappointed the caps on patrons were not increased or scrapped.