Jeremy Hunt has been pictured attending a G7 meeting in France alongside celebrity lawyer Amal Clooney as Theresa May continues her frenetic Brexit negotiations.

The Foreign Secretary was pictured in the port of Dinard on the northern coast of France on Friday alongside Mrs Clooney as they attended a meeting of the G7 foreign ministers.

It comes as Theresa May penned a letter to the EU this morning requesting a further extension of the Brexit deadline from April 12 to June 30.

Ms Clooney, 41, will join Mr Hunt today at the meeting of foreign ministers from Canada, France, Italy, Germany, Japan and the US. 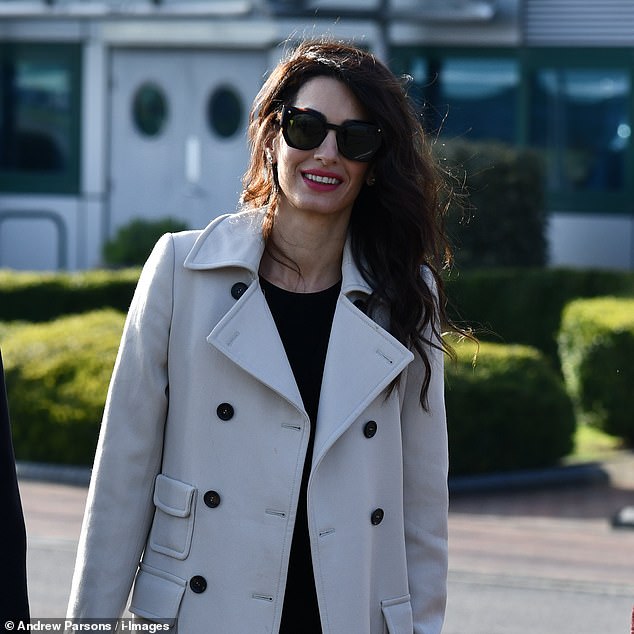 While in France, Mr Hunt appointed Amal Clooney as a ‘media freedom ambassador’ to fight for free speech, according to the Sun.

Mrs Clooney, who is famously married to Hollywood star George Clooney, has won praise for work to free imprisoned journalists around the world.

Mr Hunt has set goals to make media freedom a top priority in the coming year.

Writing in the Sun, the foreign secretary said: ‘Together we will work to ensure the legal protections available for journalists are maintained, and the global spread of laws against hate speech and fake news do not unintentionally harm the work of the media.

‘I will do everything possible to help journalists to work in safety.’

As part of his plans to tackle press freedom, Mr Hunt also announced plans for an international conference to promote safety for journalists.

Britain and Canada will co-host the first edition of the conference in London in July this year. 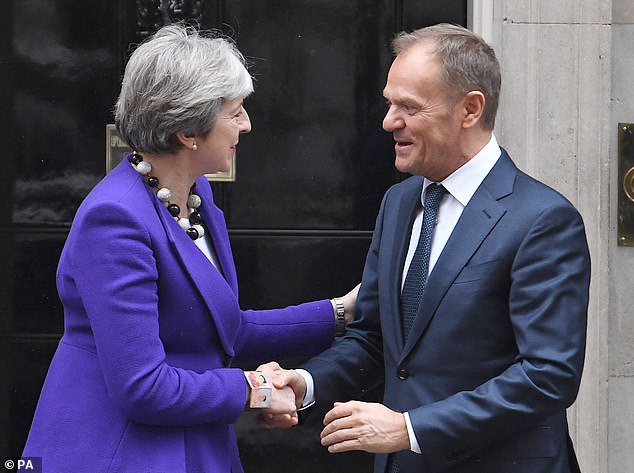 Theresa May has asked lead EU negotiator Donald Tusk for a short extension until June 30, but looks set to be rebuffed

It comes as Theresa May’s cabinet nears open revolt over her talks with Jeremy Corbyn to reach a Brexit compromise.

Several of the Prime Minister’s inner circle are said to be voicing their discontent over Labour demands to offer to hold a second referendum on the final deal.

Mrs May’s request for a short extension, meanwhile, looks set to be rebuffed by Brussels – with reports suggesting Donald Tusk has said that a 12-month ‘flextension’ offer is ‘the only reasonable way out’ of the crisis.

Before the meeting on Friday, Hunt said he would call on his European counterparts to support his government’s request for a further delay to Britain’s exit from the EU, scheduled to take place in a week unless EU countries agree an extension.

Prime Minister Theresa May has been unable to pass her withdrawal agreement in parliament. Hunt said the G7 was proof Britain was not pulling back from a leading international role.

‘The UK’s involvement in the G7 is vital for our collective security and prosperity as we seek to protect the rules-based international system,’ he said. ‘Be in no doubt that once Brexit has happened, the UK will remain a global power.’

Along with the United States, France and Britain, the group includes Japan, Germany, Italy, Canada and the European Union. The ministerial meeting is meant to ensure that when the leaders convene in Biarritz in August, they are largely in agreement. 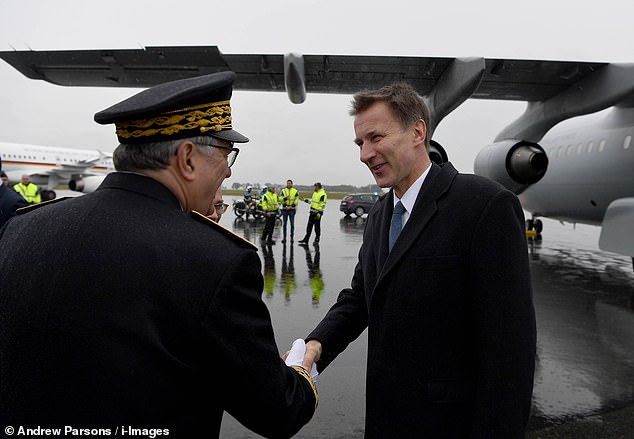 Jeremy Hunt greets a French diplomat after arriving on the runway in Dinard, France for the conference 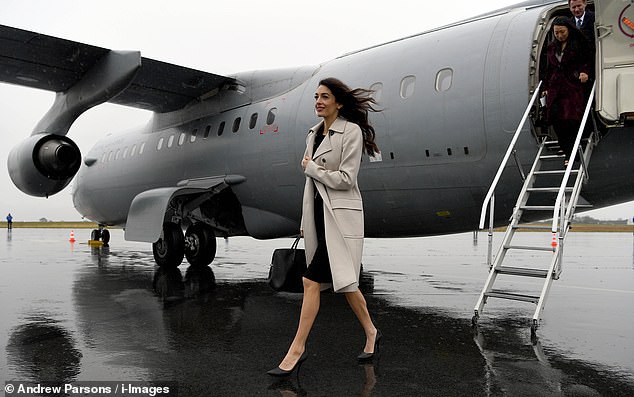 Mrs Clooney, 41, was appointed a media freedom ambassador for her role in representing incarcerated journalists worldwide