Amanda Holden sent well wishes to her ‘dear friend’ Simon Cowell as he recovers from a six-hour emergency surgery after breaking his back in several places.

The presenter, 49, who serves as a judge alongside the music mogul, 60, on Britain’s Got Talent, confirmed the TV star is ‘doing really well’ as she shared a throwback image of the duo from show auditions onto her social media platforms on Sunday.

Injured Simon came within ‘one-centimetre of being paralysed’ when he fell from his electric bicycle earlier in the weekend, and was forced to undergo an operation which saw a metal rod placed in his back.

‘He’s doing really well’: Amanda Holden sent well wishes to Simon Cowell on Sunday as he recovers from six-hour emergency surgery after breaking his back (pictured earlier this year)

Supportive pal Amanda wrote: ‘I’ve been thinking about my dear friend all day and luckily I’m able to write that he’s had his operation and he’s doing really well.’

‘My family and I wish you a speedy recovery and send you, Lauren and Eric all our love.’ (sic)

The media personalities have been close pals ever since he hired her to star as a panellist on the ITV competition series’ inaugural edition in 2007.

Simon was operated on during Saturday night after the accident at his Malibu home earlier in the afternoon. 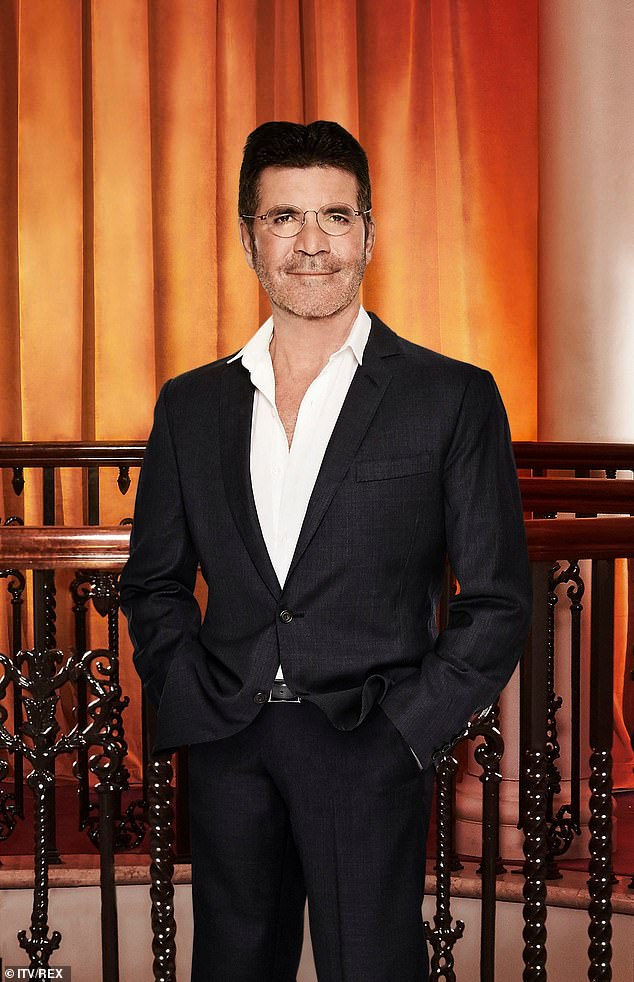 Ouch! The music mogul, 60, came within ‘one-centimetre of being paralysed’ when he fell from his electric bicycle earlier in the weekend (pictured in April) 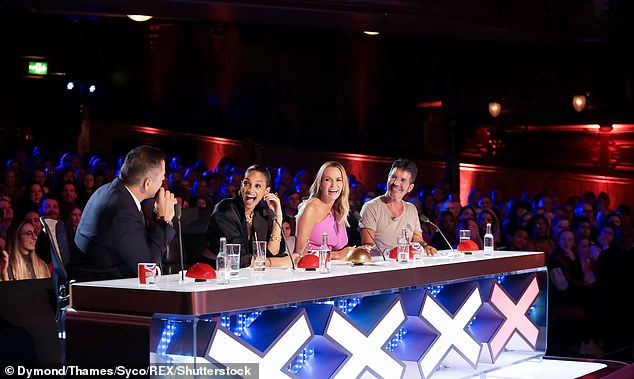 Close: The presenter, 49, serves as a judge alongside the TV star, David Walliams and Alesha Dixon on Britain’s Got Talent (pictured in May) 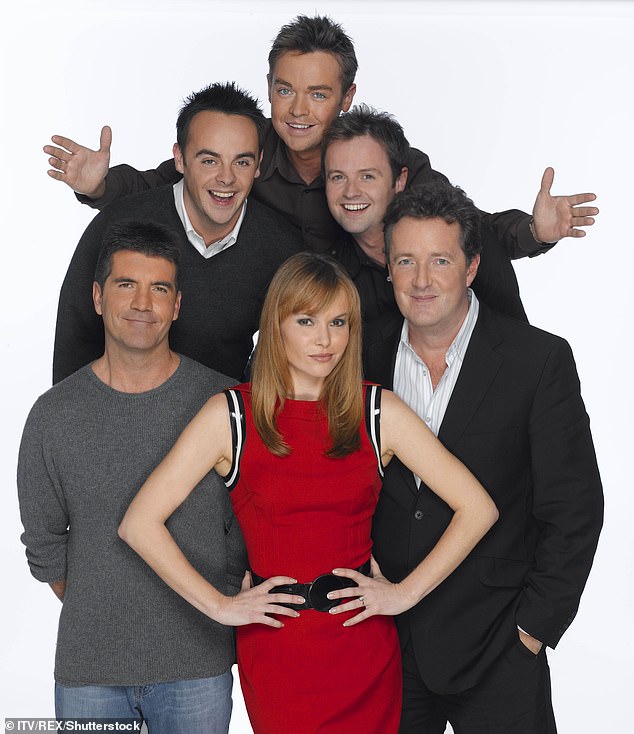 They go way back! The media personality hired her to star as a panellist on the ITV series from 2007 (pictured toegther in 2008 with Piers Morgan, Ant McPartlin and Declan Donnelly)

A source told The Mirror: ‘Simon fell flat on his back and the doctors say the impact missed his spinal cord by about a centimetre and it could have been a lot, lot more serious.’

Simon broke his back in a number of places in the accident, with a spokesperson telling MailOnline that he is now ‘under observation and doing fine.’

A friend of the family said Simon is doing well now, but was in ‘shock and massive amounts of pain’.

At the time of the fall, Simon’s son Eric and stepson Adam were with him and since being admitted to hospital Lauren has been able to see him briefly.

They said: ’He’s in recovery and asleep. Lauren went with him to the hospital and has been allowed in briefly to see him. He’s doing OK in the circumstances.

‘He was in shock and in massive amounts of pain. He was outside in the courtyard in Malibu with Eric and Adam trying this new bike’.

However it will take him some time to recover and it is expected that Simon will remain in hospital for at least the next few days.

Discussing the TV star’s recovery, another source told The Sun Simon had suffered ‘three breaks in his back’ and it could take ‘several weeks’ before it is know if Simon will have any long lasting effects from the fall.

They said: ‘It’ll be several weeks for the bruising and swelling to go down and then we’ll know how serious the lasting effects could be.

‘He’s lucky to be even in the state he is in with a metal rod in his back and multiple breaks… He could have been looking at a life in a wheelchair.’

A representative also confirmed that he had a ‘metal rod’ put into his back during the lengthy procedure which happened overnight.

While a source told People: ‘He has had to have a number of fusions and metal rod put into his back… The injuries are bad but he’s also been told he was lucky.’

Explaining the accident, a representative added: ‘Simon had a fall from his bike on Saturday afternoon whilst testing his new electric bike in the courtyard at his house in Malibu with his family.

‘He hurt his back and was taken to the hospital. He’s doing fine, he’s under observation and is in the best possible hands.’

However a source told The Sun that Simon was attempting a wheelie when he was ‘surprised by the power’ of the new bike and knew straight away that he ‘was in trouble’.

It is not currently clear exactly what kind of back injury Simon has, but a ‘broken back’ often refers to a fracture in a part of the spine.

Long road: It will take him some time to recover and it is expected that Simon will remain in hospital for at least the next few days (pictured with partner Lauren Silverman in 2019)

It’s unclear whether or not he will now be able to participate in either the upcoming series of Britain’s Got Talent or its US equivalent show.

A source told The Sun: ‘If he had his way he’d be back at work on Monday but it’s more likely that we’re going to aim for the AGT final. It’s too soon to think about anything more or BGT at this point.’ 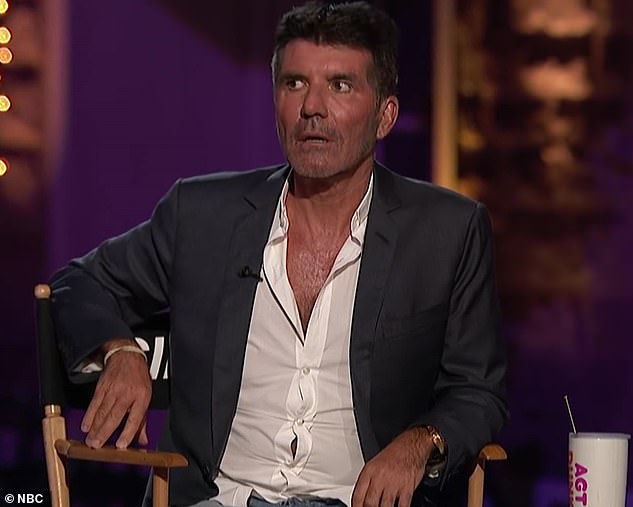 What will happen? It’s unclear whether or not Simon will now be able to participate in either the upcoming series of Britain’s Got Talent or its US equivalent show

What is a ‘broken back’?

The 60-year-old music mogul has broken his back after falling from an electric bicycle while at his home in Malibu, California.

It is not currently clear exactly what kind of back injury Cowell has, but a ‘broken back’ often refers to a fracture in a part of the spine.

The spinal cord sends transmits signals from the brain to the rest of the body, and any damage to it can cause paralysis.

A number of medical conditions such as osteoporosis or spinal tumours can naturally weaken the back.

There are different types of fractures you can suffer such as a Chance fracture which involves the pulling of the bones in the vertebrae.

This is a common back injury for people who have been in car accident where the upper body is moved forward rapidly but the lower body stays in place.

Patients who suffer from bone weakness associated with osteoporosis can often get what is known as a compression fracture in which the vertebrae collapse.

If the spinal cord is also damaged the injuries can have more severe long term consequences.

The higher up the spinal cord the more movement will be restricted.

Damage to the spinal cord in the back will result in paraplegia in your legs and potentially your stomach muscles.

And damage in the spinal cord in the neck will result in tetraplegia which can impact upon all of your limbs.

Simon is due to return to America’s Got Talent next week, with the first live show set to air on Tuesday August 11.

Last week, it emerged that his commitment to the upcoming shows would be compromised due to a timetable clash.

The talent show maestro was already set to miss out on the BGT semi-finals this year for the first time as production takes place at the same time as America’s Got Talent due to COVID-19 delays.

Prior to his fall, a source told The Sun: ‘Simon is gutted to not be physically there for the semi- finals, but he’ll be there virtually, casting an eye over the talent and imparting his views in every show.

‘Normally, schedules mean Simon can do both but AGT’s dates haven’t moved while BGT’s have due to coronavirus.’

Simon is regularly seen on bike rides with his family around his Malibu home.

The TV veteran has embarked on a healthier regime in recent years, leading to a 60 lbs weight loss.

His new health regime has seen him committed to a diet of white meat, fruit, and vegetables as well as regular exercise.

Simon decided to improve his health after he injured himself in a fall down the stairs at his London home in October 2017.

He was taken to hospital in an ambulance, later explaining that he had fainted due to ‘low blood pressure’.

The X Factor star blamed his injuries on his unhealthy lifestyle where he ‘lived like a vampire’, staying awake until 8am every day and vowed to take better care of himself.

He told The Sun at the time that the horrific fall had reminded him he was not ‘invincible’, and that he has a ‘responsibility’ to take control of his health as a father.

He has been sticking to his diet whilst in lockdown amid the coronavirus pandemic, but says he is always tempted to slip into old habits when his six-year-old son Eric – whom he has with Lauren – has a pizza for dinner.

Simon became a household name when he appeared as a judge on the talent show, Pop Idols, which aired in 2001.

From there he created his own music show franchise known as the X Factor which launched in 2004 and showcased some of the country’s best emerging talent including Little Mix, One Direction, and Leona Lewis.

Simon has become a staple on TV screens across Britain and a constant presence on his other show Britain’s Got Talent which originally aired in 2007.

The semi-finals for the upcoming season will take place on Saturday nights during autumn in 2020. 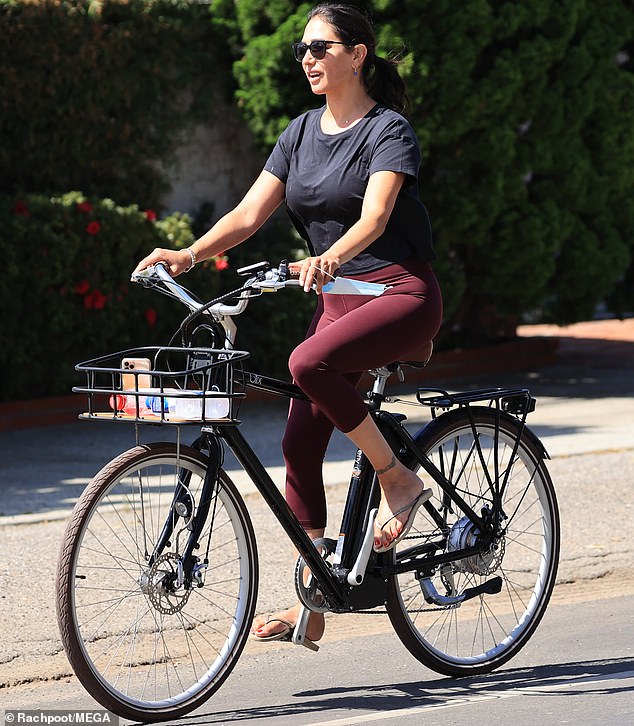 On the go: Lauren was seen riding her non-electric bicycle down a sunny street in Malibu earlier in the day 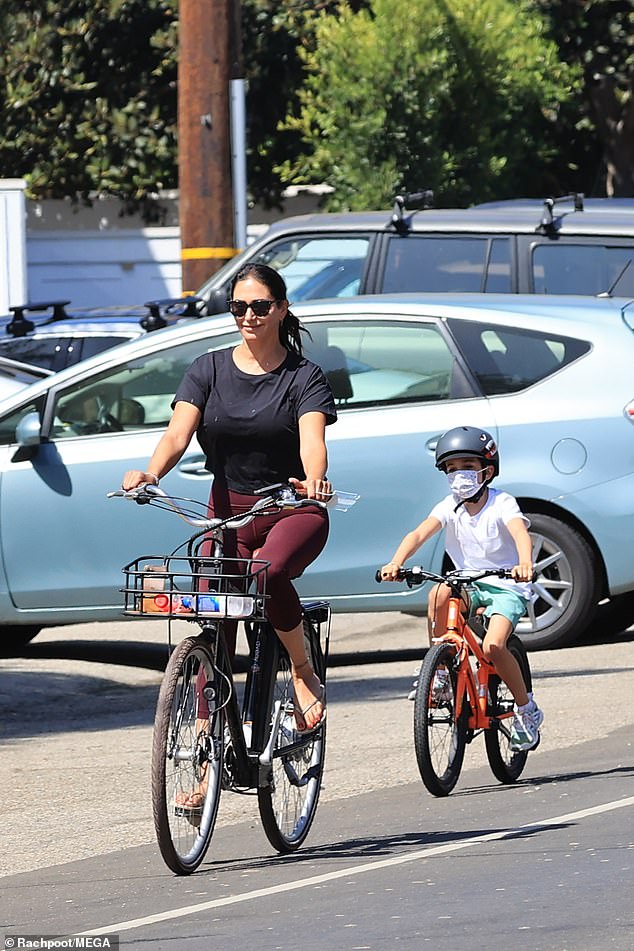 Family first: Simon and Lauren’s son Eric, six, joined his mother for the ride near their home