Amanda Knox and her fiance have launched a crowd-funder appeal to help make their wedding the ‘best party ever’ after she used their savings to return to Italy.

Knox, 32, who was served four years in jail for the murder of British student Meredith Kurcher but was cleared of the crime on appeal, asked for donations online.

As a reward for giving money for the nuptials, which appear to be space themed, donors will receive a copy of the couple’s love poems book The Cardio Tesseract.

Generous donors can become stellar, galactic or temporal patrons depending on how much they donate or can give to specific things including the entertainment.

Amanda Knox and Christopher Robinson, pictured together, have asked for donations to help fund their wedding after they used savings to help pay for a trip back to Italy earlier last month 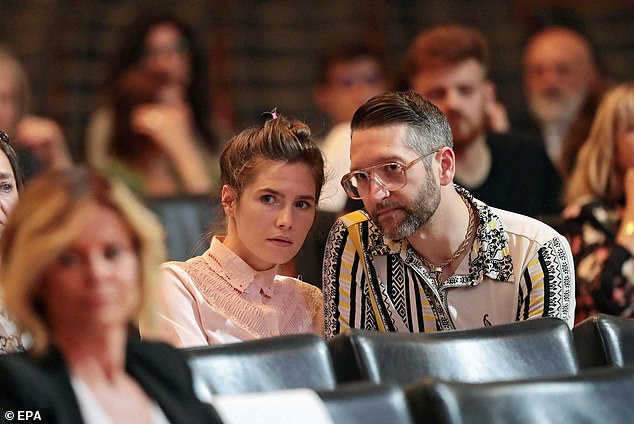 Donors can give amounts ranging from $25 to $10,000 on the online fundraising site. Knox and Robinson are pictured at the Criminal Justice Festival at the University of Modena in Italy

Knox and Christopher Robinson, 37,  explained on the registry that they needed ‘help putting on the best party ever for our family and friends.’

They said that they weren’t expecting to plan a wedding at the same time as ‘Amanda’s first return trip to Italy.’

They said: ‘But when the Italy Innocence Project invited Amanda to speak at their inaugural wrongful convictions event, we couldn’t pass up the opportunity.

‘With scant time to plan, and no financial backing, we had to spend our wedding funds on this challenging and important journey. It was well worth it. Amanda reached some hearts, and healed a bit of her own.

‘Now we’re asking for help so that we can shower our friends and family with love and celebration! Instead of a traditional registry, we are asking for donations towards the cost of the wedding.’

Stellar patrons can donate $500 to the wedding with Knox and Robinson saying ‘when Madonna’s “Lucky Star” comes on, we’ll shout you out on the dance floor.’

Galactic patrons can donate $1000 and temporal patrons, who donate $2000 – $10,000, will receive a ‘special video from the future, reading you an excerpt from the Encyclopedia Galactica.’ 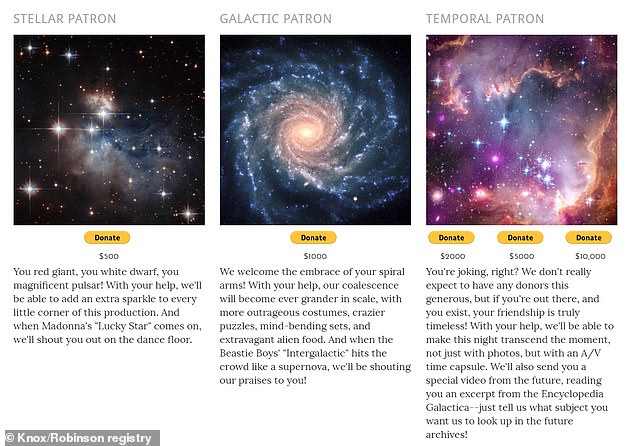 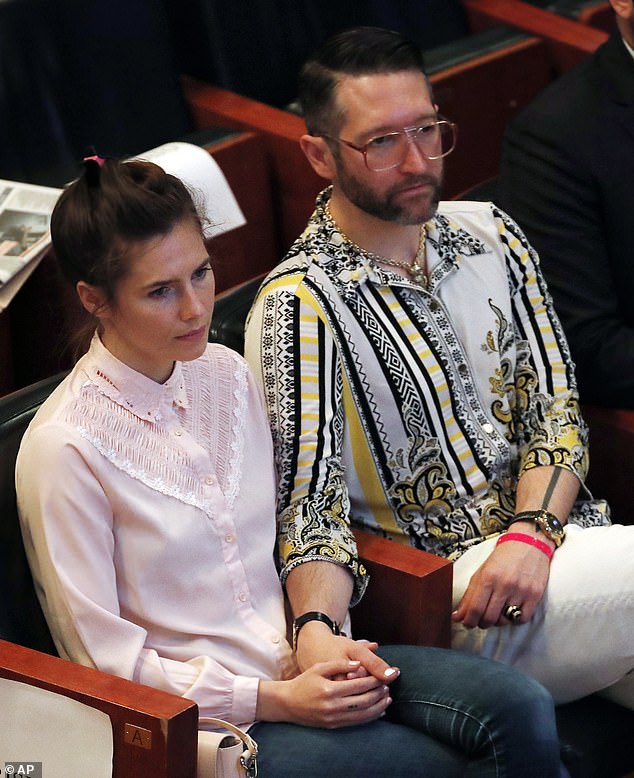 Last week Knox, pictured with Robinson, spoke at the Italy Innocence Project in Modena and said she still fears further criminal charges against her

The couple have also asked for donations for individual parts of their wedding including money for the venue, set and decor and special effects.

Another category included a $25 donation for the light and sound or towards the ‘paradox props’.

Donors will receive a copy of the couple’s poetry in return which ‘reveals the dynamics of their private life, their hopes, fears, and dark places, from thoughts of suicide and memories of prison, to dreams of raising children.’

The bride-to-be also revealed the registry on her Instagram page and asked her followers for advice.

She said: ‘I are getting married! How? Oh so weirdly! Time travel & so forth. Check out our wedding story at knoxrobinson.com/coalescence

Knox announced last month that she would be discussing ‘trial by media’ at an event hosted by the Italy Innocence Project in Modena on June 14 and 15.

‘I’m honored to accept their invitation to speak to the Italian people at this historic event and return to Italy for the first time,’ she said. 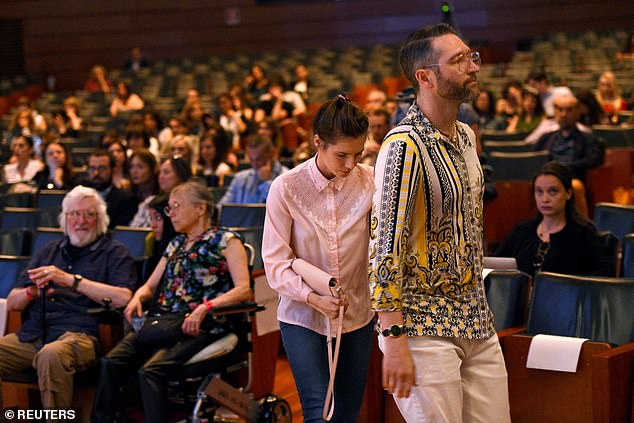 Knox and novelist Robinson, pictured together, became engaged last November. Before popping the question he took her into their front yard where he had staged a fake meteor 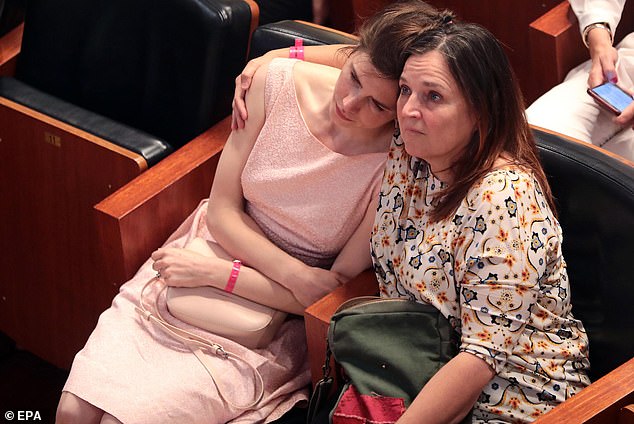 Amanda Knox (left) is held by her mother, Edda Mellas, at the conference of the Criminal Justice Festival at the University of Modena in Italy – her first return to the country since she was cleared of murdering Meredith Kercher at their rented house in Perugia in 2007

During the event Knox said she still fears further criminal charges against her for the crime despite her acquittal back in 2015.

She said: ‘I’m afraid today, now, I’m afraid of being harassed, mocked, stuck and I’m afraid that new accusations will be addressed to me just because I come here to say my version of the facts. But above all, I fear I will lack the courage. 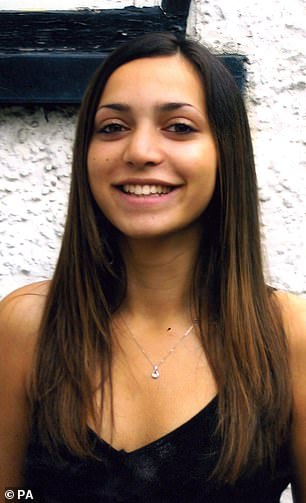 Knox was convicted of murdering roommate British exchange student Meredith Kercher (pictured) in their Perugia apartment in 2007. She was later cleared of the charges

‘I know that despite my acquittal issued by the Court of Cassation, I remain a controversial figure in the presence of public opinion, above all and especially here in Italy’.

The body of the 21-year-old British exchange student Meredith Kercher was found by police in the Perugia apartment she shared with Knox on November 2, 2007.

Officers discovered Kercher’s throat was slashed and she had been sexually assaulted.

Knox and her then-boyfriend Raffaele Sollecito were arrested and later convicted of murder and sexual assault in 2009.

The couple maintained their innocence, insisting that they had spent the evening together at Sollecito’s home watching a film, smoking marijuana and being intimate.

In 2011 the Perugia Court of Appeal acquitted the pair of the more serious charges, though upholding a minor conviction for Knox. She returned to the United States that year. 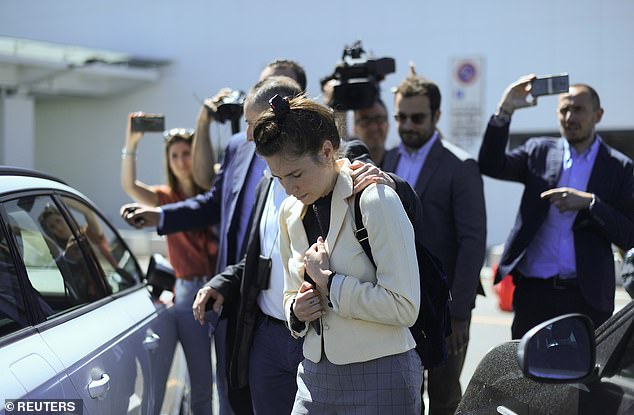 In a flip-flop series of court decisions in her absence, her murder conviction was reinstated and then finally overturned again in 2015.

She is now engaged to fiancé Christopher Robinson, a novelist who proposed to Knox with an elaborate sci-fi-themed display last November.

During the proposal he took her into their front yard where he had staged a fake meteor, which contained a ‘data crystal’ describing their ‘coalescence’.

They have been dating since February 2016 and Knox made the relationship public with a change in her Facebook status later that year.

The couple met after Knox – who became known as Foxy Knoxy during her ordeal – had reviewed Robinson’s book, War of the Encyclopaedists, on her blog.