Amanda Knox has slammed Matt Damon for ‘profiting from her story without her consent’ with his new movie Stillwater which is based ‘loosely’ on her time in Italian prison for the murder of Meredith Kercher.

Stillwater is about an American girl imprisoned in France for a murder she says she didn’t commit. Damon plays the girl’s estranged father, an oil-rigger, who travels to Europe to help her.

In an interview with Vanity Fair on Thursday, the film’s director and co-screenwriter Tom McCarthy said the film was based on the ‘Amanda Knox saga’ somewhat but that he decided to ‘leave the Amanda Knox case behind’ and focus instead on the relationship between the girl and her father.

Knox however says she should have been consulted at the very least about the plot.

In a series of tweets on Thursday, Knox fumed that the makers of Stillwater who she says are taking advantage of her story without her consent and making money from it. 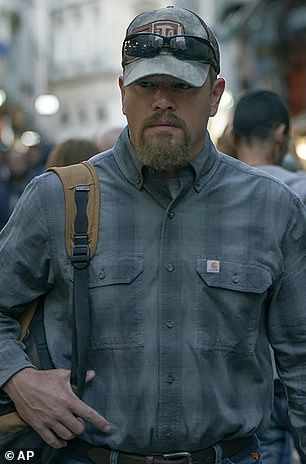 Amanda Knox fumed that the makers of Stillwater who she says are taking advantage of her story without her consent and making money from it. Stillwater is about an American girl imprisoned in France for a murder she says she didn’t commit. Damon plays the girl’s estranged father, an oil-rigger, who travels to Europe to help her. 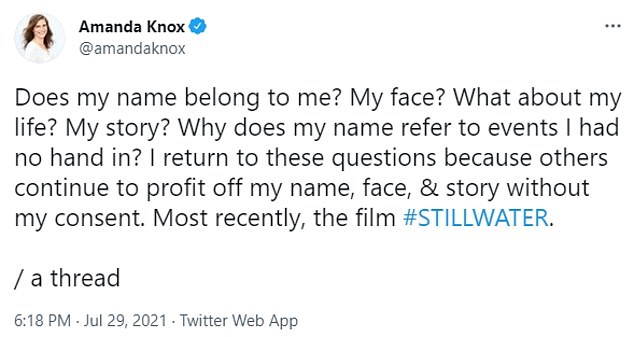 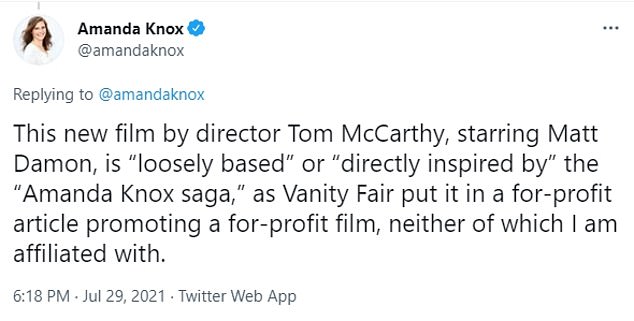 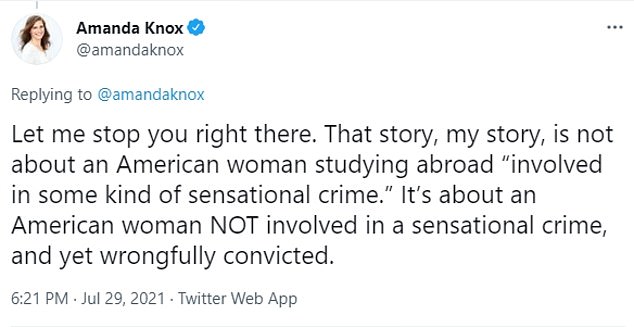 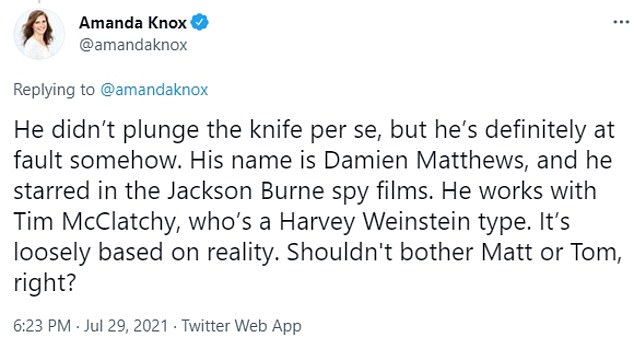 ‘Does my name belong to me? My face? What about my life? My story? Why does my name refer to events I had no hand in? I return to these questions because others continue to profit off my name, face, & story without my consent.

‘Most recently, the film #STILLWATER,’ she said.

‘This new film by director Tom McCarthy, starring Matt Damon, is “loosely based” or “directly inspired by” the “Amanda Knox saga,” as Vanity Fair put it in a for-profit article promoting a for-profit film, neither of which I am affiliated with.’

She went on to say it’s not her fault she is constantly associated with Meredith’s murder, and say: ‘#STILLWATER is by no means the first thing to rip off my story without my consent at the expense of my reputation.

‘There was of course the terrible Lifetime movie that I sued them over, resulting in them cutting a dream sequence where I was depicted as killing Meredith.’

She also fumed that the movie ‘reinforces an image’ of her as a ‘guilty and untrustworthy person’ because in the movie, the girl is involved in the murder.

‘My screenplay idea. It’s directly inspired by the life of Matt Damon. He’s an actor, celebrity etc. Except I’m going to fictionalize everything around it and the Damon-like character is involved in a murder.

‘He didn’t plunge the knife per se, but he’s definitely at fault somehow. 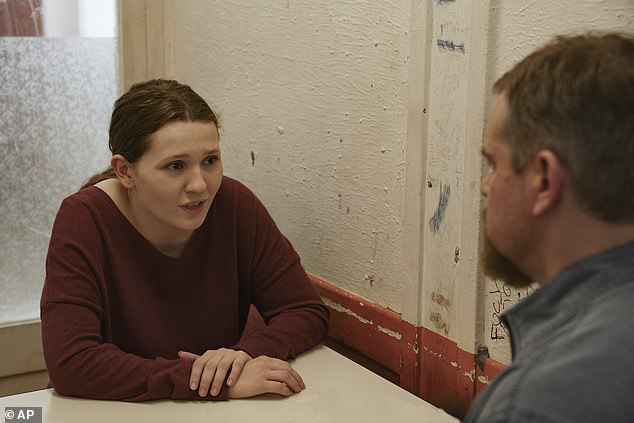 Stillwater is about an American girl imprisoned in France for a murder she says she doesn’t commit. Damon plays the girl’s father. He is shown above with Abigail Breslin who plays his daughter 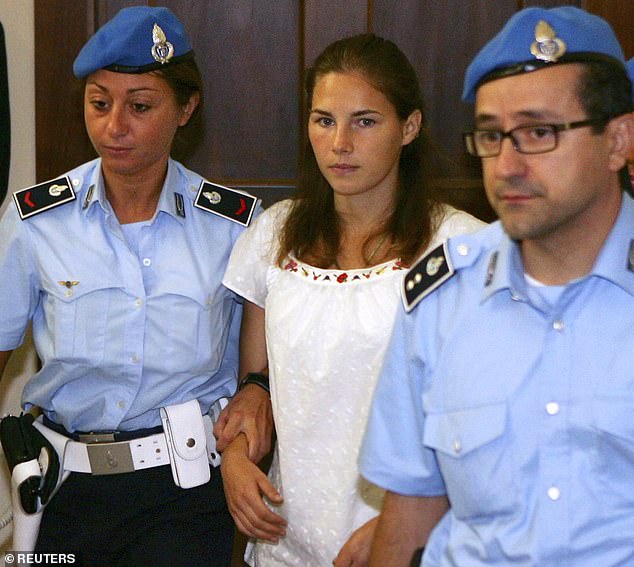 Knox was convicted of murdering Meredith Kercher, a British exchange student, but had her conviction overturned 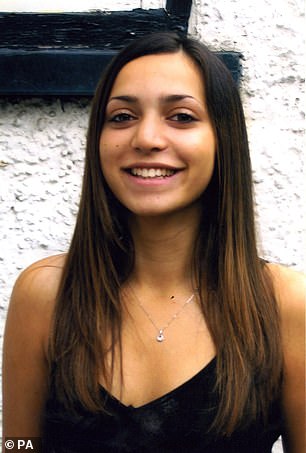 British student Meredith Kercher was brutally murdered in Perugia in 2007

His name is Damien Matthews and he starred in the Jackson Burne films.

Knox invited Damon and McCarthy on her podcast to talk to her about the film and her decisions.

Knox was imprisoned for the murder of Meredith Kercher, her British friend, in Perugia, Italy, in 2007. She had her conviction overturned in 2015 and returned to the US, where she has since written books and released a documentary about her experience.

Rudy Guede was sentenced to 30 years in prison for Meredith’s murder but upon appeal, had it reduced to 16 years. In 2017, he was released early and allowed to complete the remainder of his sentence on community sentence. He’ll be completely free next year.

Stillwater will be released today in theaters across the US.

In his interview with Vanity Fair,  McCarthy said: ‘There were so many characters around the case that I really followed pretty closely. 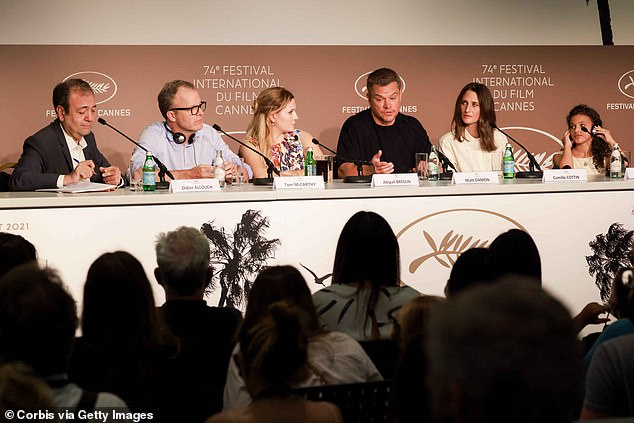 ‘But really the first thing that I took away from it was, what would that be like as an American student to go over [to Europe] for what should be one of the most exciting moments in a young-adult life and to find yourself in that tragedy?

‘There were just so many layers to that story that kept anyone who was following pretty riveted.

‘Who are the people that are visiting [her], and what are those relationships? Like, what’s the story?’

Neither Damon nor the film’s makers have responded yet to Knox’s criticism or her invitation to go on their podcast.

The film was shown at the Cannes Film Festival this year where Damon said he’d gone to Oklahoma to immerse himself in the life of an oil-rigger to connect to the part.

‘Being invited into their homes, into a backyard barbecue, a guitar comes out and they start singing church songs. It’s a very specific place.. and very different to where I grew up.

‘It was really eye-opening for me.’

He said that he’d been able to connect to the role because he has kids too, but didn’t mention Knox.

‘Since I’ve had kids I feel like everything is a lot more available in my job, emotionally speaking.’