Yorkshire Shepherdess Amanda Owen has revealed she ‘ignores’ negative media attention and has remained ‘resilient’ in the face of rumours swirling around the state of her marriage.

The mother-of-nine, who stars with her family  in Channel 5’s hit show Our Yorkshire Farm, found her marriage under the spotlight this autumn after neighbours claimed she and husband Clive Owen, 66, had been ‘living apart for months.’

At the time, the shepherdess, 47, who will appear in the channel’s special Winter on the Farm with Helen Skelton tonight, remained tight-lipped, apart from releasing a joint statement with Clive in which they said they had ‘stresses and strains’ like any other marriage.

Speaking on Lorraine today, Amanda revealed she has learned to ‘take the rough with the smooth’ and spoke of the ‘resilience’ that has helped her ‘weather the storm’.

Yorkshire Shepherdess Amanda Owen, 47, who stars with her family in Channel 5’s Our Yorkshire Farm, said she has learned to ‘take the rough with the smooth’ following months of speculation over the state of her marriage to Clive Owen, 66 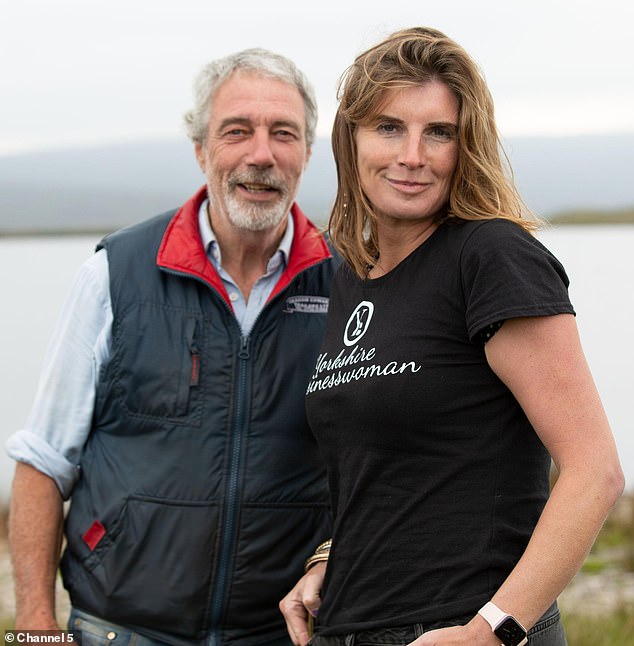 Rumours that Amanda and Clive’s relationship is on the rocks began swirling in October after neighbours claimed they had been living apart for months. Pictured together on the Our Yorkshire Farm show

Cutting a particularly glamourous figure on the show in a floral green dress and a glossy lip, Amanda was pressed about the rumours by Lorraine.

The presenter praised the mother-of-nine on Our Yorkshire Farm and her beautiful family, before venturing that there must be some ‘downside’ to the media attention Amanda and Clive garner.

‘You have to take the rough with the smooth,’ Amanda replied.

‘We were talking about how you weather a storm, we’re pretty resilient in the hills, that’s all we got to go. If you’re proud of what you’re doing, you have to shoulder it, that’s exactly what we do, get on with it, ignore it.’

Amanda and her husband of 21 years Clive, released a joint statement in October saying ‘like any marriage we have our stresses and strains’ but added they always wanted to ‘show the reality of life on the farm’ through their TV shows and book deals.

The couple’s neighbours told MailOnline the pair had been living apart for months after she ‘got caught up in the spotlight’ of her Channel 5 programme.

Our Yorkshire Farm star Amanda revealed that she and Clive are not the romantic types in an interview shortly before the couple confirmed they are going through a ‘rocky patch.’ 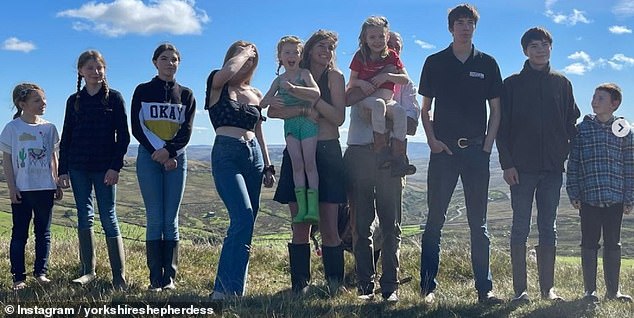 Amid the rumours, Amanda shared a picture of her brood with Clive, pictured, in early November, saying they are her number one

Amanda spoke candidly on how ‘romance’ is not in her and Clive’s ‘make-up.’

When asked if she and her husband are romantic, the shepherdess told OK! magazine: ‘I don’t think either of us are! I don’t think it’s in our make-up.’

The shepherdess went on to reveal what she believes to be the secret to her 21-year marriage.

‘Everything we do is interchangeable,’ she said. ‘Clive will serve afternoon tea and change nappies, I’ll shear sheep and shovel s**t. It doesn’t matter who does what, we’re all on the same side.’

Amanda praised Clive for being a ‘hands-on’ dad, adding that ‘at certain times of year, it’s all hands on deck and all tasks on the farm are interchangeable.

There’s no one hat for any one person and I think that’s a great life lesson.’

In November, the 47-year-old shared a photo of husband Owen and their nine children, aged seven to 20, on Instagram yesterday to mark the success of her new book, Celebrating the Seasons with the Yorkshire Shepherdess.

The snap showed Amanda and Owen, who have been married for 21 years, standing on a windswept hill, flanked by their brood.

It is not known when the photo was taken but their clothing – Amanda was wearing a crop top and short skirt – suggested it was taken earlier this year, before rumours of marital troubles first emerged.

The caption read: ‘They’re my number 1. We’ve had plenty of number 2’s to deal with & now we have a number 3 !!!!!! Absolutely stunned to learn that my book is at number 3 in the @thetimes @thetimesbooks bestseller charts.’

The post came after she was seen wearing her wedding ring as she stepped out in Manchester last Thursday in her first public outing since the reports.