Ethel McGill, 68, of Cheshire, is pictured in her acting profile on the StarNow website

An amateur actress master-minded a £750,000 benefits scam by hiding her father’s death and faking illness for more than 23 years.

Ethel McGill, 68, was at the heart of a ‘spider’s web’ of deceit that amounted to the biggest ever individual benefit fraud in history, officials believe.

The mother-of-two used her acting talents to con the authorities into believing her father, Robert Dennison, was alive for more than a decade after his death – even showing inspectors into his bedroom with an imposter in his bed – so she could claim his war pension and handouts for expensive round-the-clock care.

But despite raking in almost £600,000 in the name of Dennison – a former infantry man in the British Army during the Second World War – over 12 years, it was still not enough for greedy McGill.

She also faked several illnesses herself – including arthritis, asthma and later dementia – and claimed she needed a wheelchair to get around to secure her own disability living allowance (DLA) payments and lucrative care package.

But officials became suspicious when, during repeated visits McGill made excuses about why her father was not at home.

They began investigating and surveillance teams captured McGill out shopping, driving, walking and carrying armfuls of boxes and wooden shelving near her bungalow, in Runcorn, Cheshire. 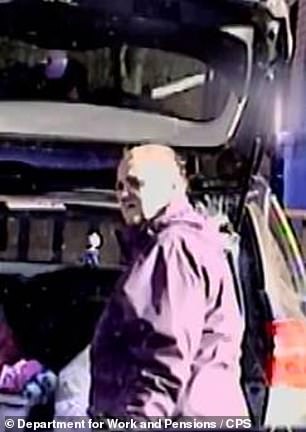 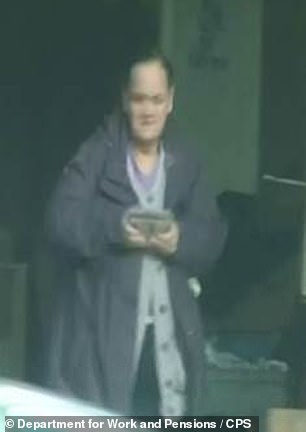 They also discovered her acting profile on the StarNow website, in which she declared she had performed in many roles in amateur plays, ranging from ‘a very hard hearted Glasgow woman to being a very timid domestic abuse victim.’

Chester Crown Court heard that even when arrested, in March 2016, McGill kept up the pretence, telling police Mr Dennison was ‘away at the caravan’ and feigning walking difficulties as police tried to take her to the cells. In reality Mr Dennison had died, aged 82, in April 2004. 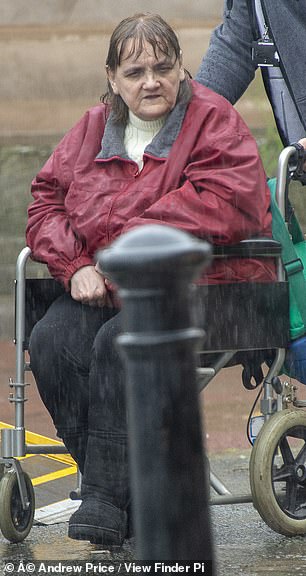 The court heard McGill, who is originally from Glasgow, spent a month at a mental health hospital following her arrest, before five psychiatrists concluded there was nothing wrong with her. She has also since been diagnosed with ‘factitious illness disorder’.

Today, McGill was brought into court by wheelchair, but a judge questioned whether she was still ‘putting it on’ and warned he would jail her when she is sentenced later this month. She admitted 14 counts of fraud and money laundering in June.

Judge Steven Everett, the Recorder of Chester, told her she was a ‘very devious woman.’

‘I’m sure you know what’s going on Ethel McGill,’ he said. ‘Listen to me, you are insulting my intelligence.’

Judge Everett added: ‘Let’s be crystal clear, I’m going to send her to prison. It’s like a spider’s web and she is at the heart of it.’

He told the court he was forced to adjourn the case to Liverpool Crown Court, where there are better facilities for wheelchair users, but ordered McGill be effectively put under house arrest and forced to stay inside until 6am on July 29, when she will be sentenced.

The court heard McGill’s fraud dated back to 1993 when she told officials she was confined to a wheelchair and couldn’t drive in order to claim mobility allowance.

More than £590,000 was obtained in her dead father’s name and included attendance allowances, housing and council tax benefits, plus his independent living fund care package, a war pension and council pension from when he worked as a binman. 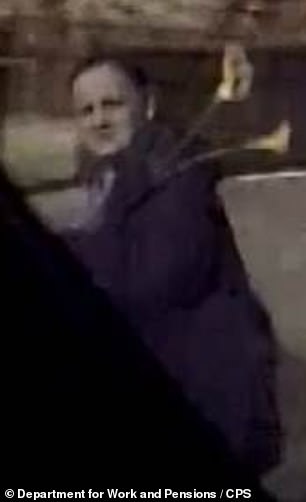 McGill also persuaded Hannah Bazley, 25, the girlfriend of her other son, Anthony, 29, to help her con her GP and apply for a care package to support her fictitious dementia.

The pair hijacked the identity of an innocent woman to secure her national insurance number and make the fake claim, which totalled £3,700 over four months in 2014.

In a statement to the court, McGill claimed the money she claimed had gone to ‘worthy causes’, but prosecutors remain baffled as to what exactly she spent the cash on.

They said McGill, who has previous convictions for benefit fraud and obtaining property by deception, for which she received an eight month jail term, lived in a modest bungalow and there was ‘no evidence’ of a lavish lifestyle.

Stephane Pendered, spokesman for the CPS, said: ‘This is the largest case of benefit fraud by a single person.

‘Not content with receiving her father’s pensions, housing and tax benefits under false pretences, Ethel McGill made good use of her amateur dramatic skills by feigning dementia to succeed in her own fraudulent benefit claims.’

Christopher McGill admitted one count of fraud by false misrepresentation and was made the subject of a two year community order. Bazley admitted two counts of the same charge and received an 18 month community order.