Amazing footage of planes landing and taking off at Lukla

This incredible footage shows a breath-taking perspective as planes take off and land at one of the world’s most dangerous airports.

The videos were captured by cameras attached to the undersides of two aircraft and show the dramatic approach and ascent from Lukla Airport in Nepal.

The dramatic clips were filmed from a Dornier 228, a twin-turboprop utility aircraft that is a common sight at the airstrip located high in the Himalayas. 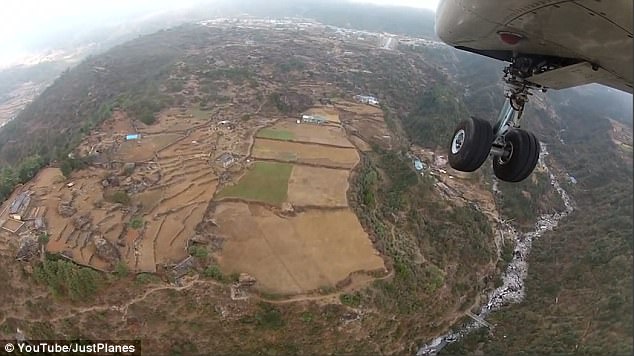 The footage shows a Dornier 228, a twin-turboprop utility aircraft, coming into land at the Himalayan airport

The dramatic footage shows exactly why Lukla Airport has the dubious honour of being known as one of the world’s most hazardous.

In the first clip an aircraft can be seen making its way through the clouds over the peaks of the Himalayas – then the tiny runway appears in the distance.

The small plane then hurtles towards the runway at great speed – managing to brake and slow down just before reaching the ravine at the end.

Meanwhile in the second clip, of the take off, a similar Dornier 228 can be seen becoming airborne within seconds. 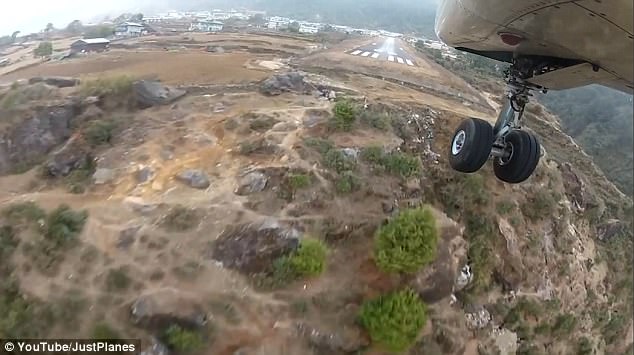 As the plane makes its final approach, the small runway, which is much shorter and narrower than standard runways, becomes clear 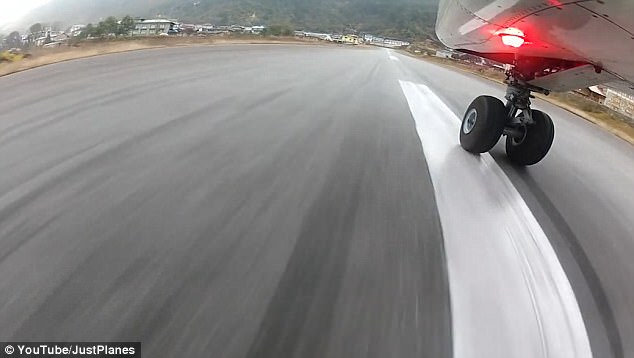 The small plane has only a matter of seconds to come to a standstill on a runway that is around 5,000 metres shorter than standard international runways

The cameras fixed to the undersides of the fuselages show breathtaking scenery.

But the take-off clip has an eerie dimension to it because according to Just Planes, who filmed and published the footage, the plane that features in it crashed not long afterwards.

Lukla Airport has developed its reputation as it is tiny – just 20 metres wide and 460 metres long, less than a tenth of the length of the standard 5,500 metres at international airports – and it has one of the steepest approach pathways in the world.

Pilots have to undergo special, rigorous training to be able to land or take off from the airport, which is almost 10,000 feet above sea level. For those looking to scale Mount Everest, it is the nerve-rattling start of the expedition.

Since the 1970’s, Lukla airport has had an astonishing number of accidents, now into double figures.

The most severe accident to date was the October 2008 crash, where an aircraft plummeted on its final approach and caught fire, killing 18 passengers and crew.