This is the terrifying moment a powerful tornado rips through a British town toppling trees, flattening fences and ripping tiles off roofs.

The twister touched down in Northampton at around 8pm on Saturday evening as high winds and storms battered the area.

Gardeners at Moulton Allotments were left counting the cost as entire sheds were overturned and fence panels lifted from the ground.

Allotment owners said they believe the cost of the damage is expected to run into thousands of pounds.

Other locals reported tiles being ripped from rooftops, power lines coming down and trampolines and bins being lifted from gardens. 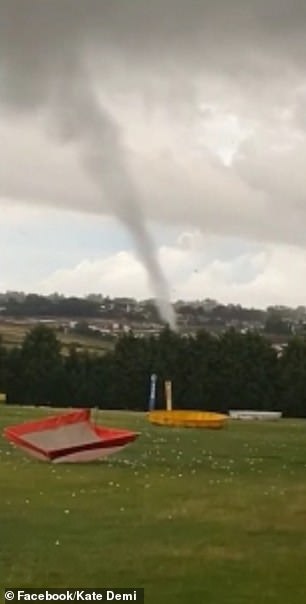 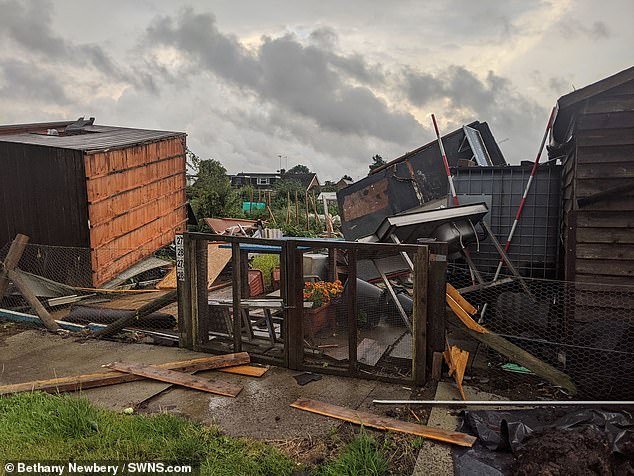 A tornado ripped through Northampton at around 8pm yesterday damaging homes and allotments. Pictured is the aftermath of the chaos

Resident Joe Minney, of Moulton, said: ‘My bathroom window blew open and my blind was ripped out the fixings.

‘My bins were blown over and the rubbish chucked up into the air really high.

‘Luckily we have an eight-foot brick wall surrounding our garden so no fences fell down. 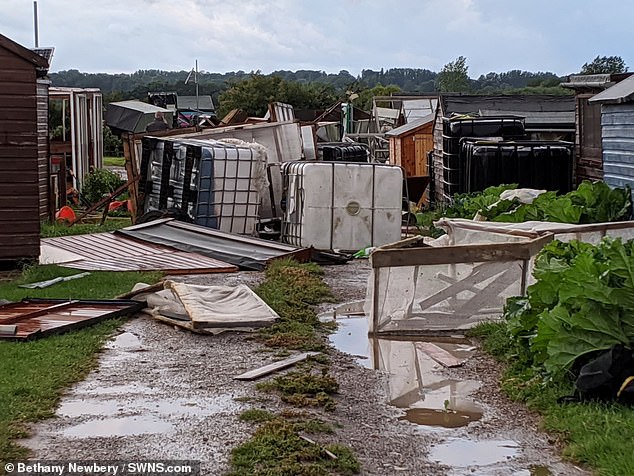 ‘But it was crazy. The door was open to let a breeze in but never expected a tornado to come past I couldn’t physically shut the back door.

‘It was all over so quickly maybe 30 seconds or so.’

For the Met Office to classify it as a tornado, a funnel cloud needs to touch the ground – and dozens of witnesses in the area described this happening.

In video footage captured by residents, the twister could be seen tearing along the ground and chucking debris into the air.

Other clips show the menacing column moving across fields with dark clouds overhead. 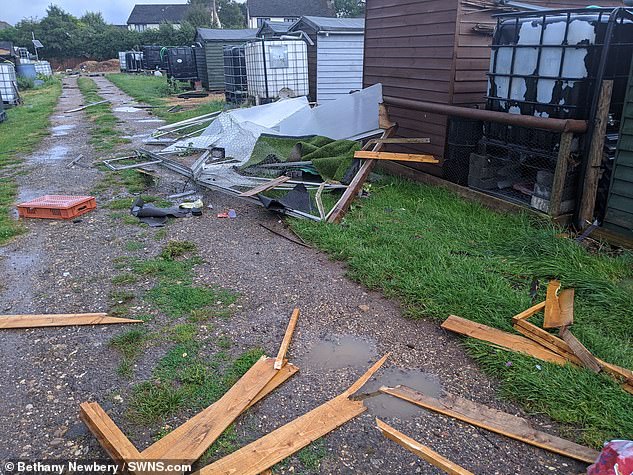 Following the tornado in Northampton yesterday, locals reported tiles being ripped from rooftops, power lines coming down and trampolines and bins being lifted from gardens

Another Moulton resident Carl Jones, told how allotments were destroyed and power lines torn down.

The 44-year-old added: ‘It was pretty hair-raising stuff. It has made a right mess of the allotments and some power lines also came down.

‘I never thought I’d see a tornado, it was quite a breathtaking thing to see and the noise of the wind was like nothing I’ve ever heard in my life.

‘Our home escaped the worst of it luckily, but I know its caused a fair bit of damage elsewhere.’

The twister comes after the Met Office issued a yellow weather warning for rain earlier on Saturday.

In a typical year, the UK sees around 30 to 35 tornadoes, though it is very rare that are they strong enough to cause any significant damage. 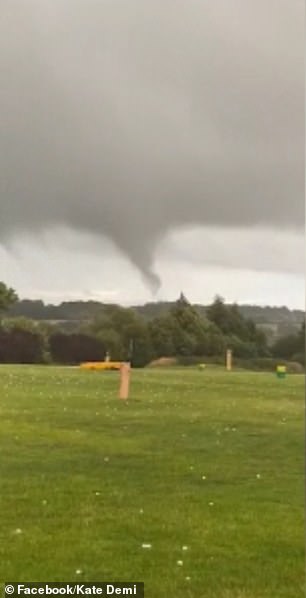 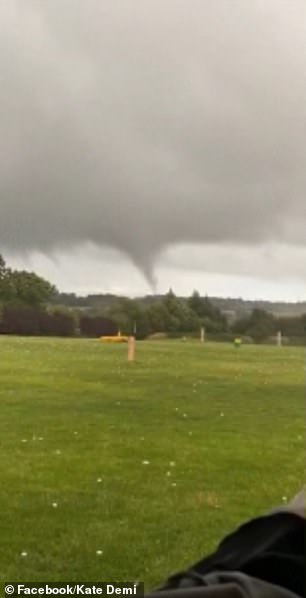 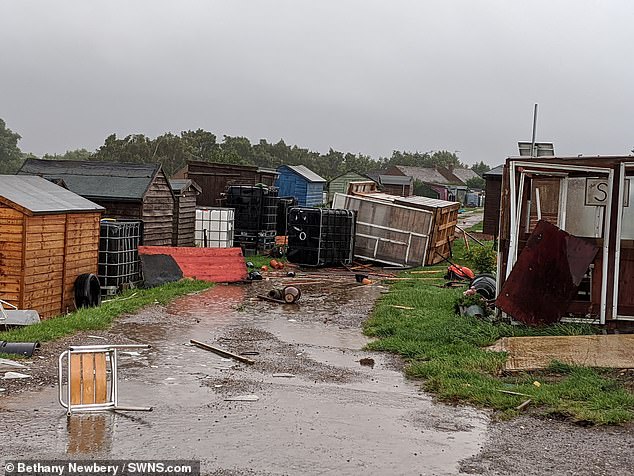 A Met Office spokesman said: ‘Funnel clouds are cone-shaped clouds which extend from the base of a cloud towards the ground without actually reaching the surface below.

‘In the UK they often look like thin dangling bits of rope, hanging from the cloud above. But in hotspots such as tornado alley in the USA, funnel clouds can sometimes be thicker and much more intense.

‘The form when a rotating column of wind draws in cloud droplets, making a region of intense low pressure visible. 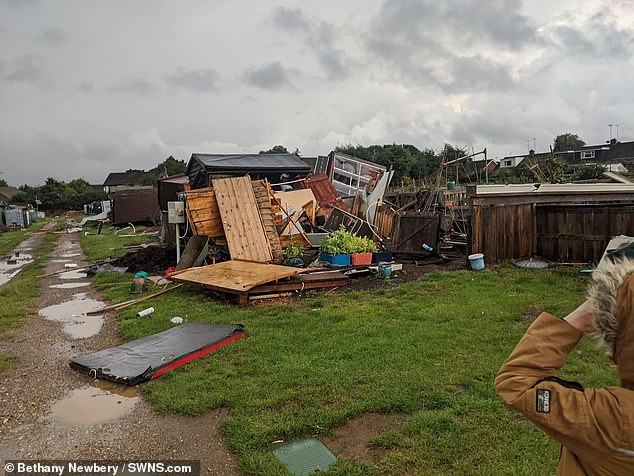 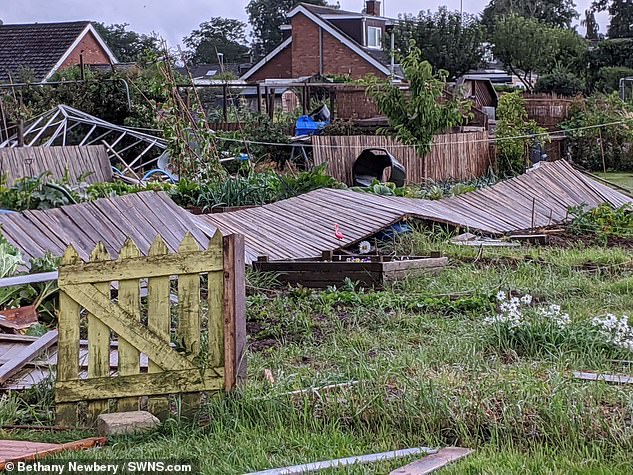 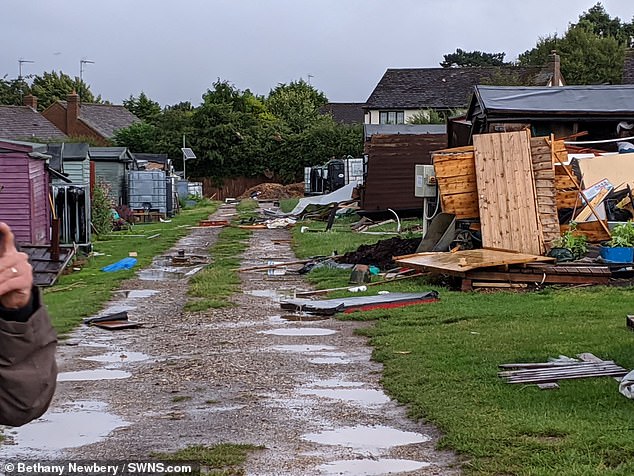 After the twister passed through the area, debris was seen littered across paths in the allotment

‘They are formed in the same way as a tornado building around this localised area of intensely low pressure and are typically associated with the formation of cumulonimbus thunderclouds.

‘If a funnel cloud does make contact with the ground and produce a tornado, very strong winds can be expected in the immediate vicinity of the vortex potentially causing severe damage.

‘In a typical year, the UK sees around 30-35 tornadoes each year, though it is very rare that are they strong enough to cause any significant damage.’

Tina Brown said: ‘We were sitting watching TV when I caught sight of some large cylinder shaped objects in the sky. I thought ‘What on earth are they?’.

‘Seconds later the wind got up really strong in our back garden, the sound was frightening. I was sitting near the window so I quickly moved away.

‘Some large troughs I had against one side of my garden took flight and landed on the opposite side. My garden fencing is held up with thick concrete posts. One concrete post was blown down along side two fence panels.’