This is the startling moment two foxes stand on their hind legs and bare their teeth at each other as they prepare to fight.

The striking images, which were captured by the wildlife photographer Shazz Hooper, 38, from Poole, Dorset, show the creatures launch themselves onto one another after breaking into fight.

Ms Hooper said she was ‘amazed’ when she suddenly saw the two foxes get into ‘a tiff’ as she crouched in the undergrowth around 20 feet away.

The striking images, which were captured by wildlife photographer Shazz Hooper, 38, from Poole, show the two foxes stand on their hind legs and launch themselves at each other in the Purbeck area of Dorset 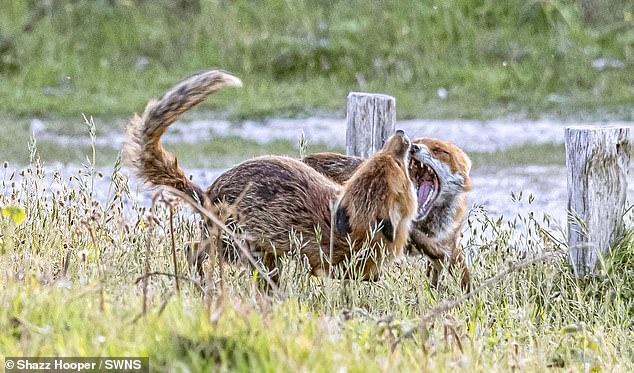 The photographer had been watching a group of four rural foxes in the Purbeck area of Dorset on Friday evening when she suddenly saw the two foxes turn against each other.

Ms Hooper’s amazing action shot managed to capture the two animals up on their hind legs, batting at one another with their front paws, with their mouths hanging wide open and their sharp teeth on show.

She later said: ‘It was more of a tiff rather than an actual fight. There was no blood drawn – it was more just noise than anything.

‘It was amazing to watch. It’s the first time I’ve got any action shots of foxes, normally I just get them standing around. 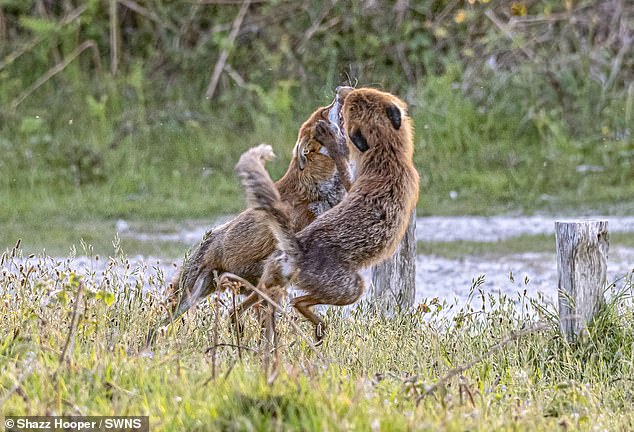 The animals, who were among a group of four foxes, leaped into the air as they fought with one another using their front paws 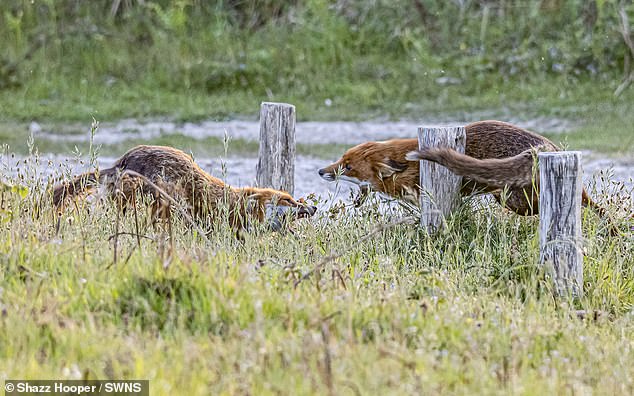 She added: ‘I was at a pretty safe distance from them, probably around 20 feet. It’s a spot I go to quite a lot as I know a few of them like to meet there at dusk.’

Red foxes, which are found in a number of diverse environments including grasslands, forests and deserts, are solitary hunters that typically feed on rodents, rabbits, birds and small game.

The animals, which have thick tails to help with their balance and long snouts, are born with brown or grey fur before a new red coat begins to emerge in the first month.