Smart speakers, herbal teas and children’s books are among more than a dozen new products that will now be used to help calculate the cost of living in Britain.

The 16 items, including the Amazon Echo ‘Alexa’ and Google Home speakers, have been added to the official ‘basket of goods’ that measure price movement.

The Office for National Statistics uses the price changes of 700 goods and services to watch inflation – with the list changed annually to follow consumer trends.

Among the items added to the basket of goods (left) are popcorn, smart speakers, peanut butter, children’s books for six to 12-year-olds, herbal tea and electric toothbrushes. Six items on the way out (right) are cola flavoured drinks [split into regular and diet cola], the hi-fi, three-piece non-leather suites, dry dog food, washing powder and envelopes 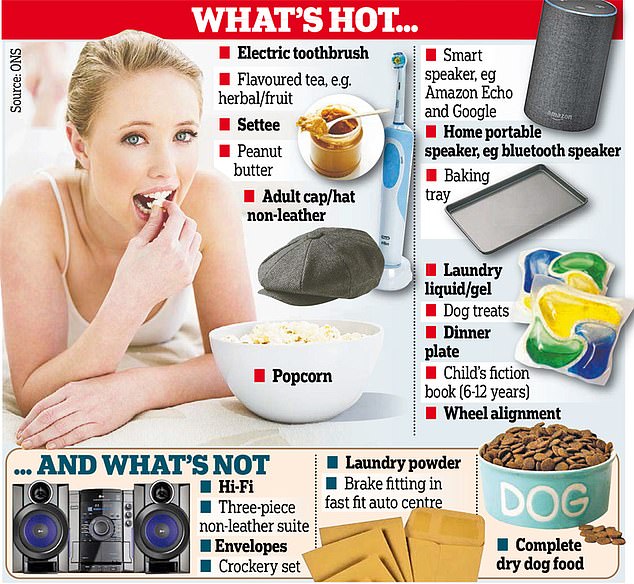 Envelopes have been dropped from the basket that the ONS use to calculate the increase in the cost of living, suggesting they are now a thing of the past

Meanwhile some items have been brought in to replace others – such as non-leather settees replacing three-piece suites, and portable speakers replacing the hi-fi.

On the addition of smart speakers, the ONS said this was ‘due to increasing popularity’ and to ensure the basket shows the latest tech that people are buying.

Flavoured tea, such as herbal or fruit, was added ‘to reflect the increased expenditure and shelf-space devoted to flavoured teas more generally’.

And children’s books for ages six to 12 were included to ‘close a gap in the coverage of books between illustrated books for infants and teenage literature’. 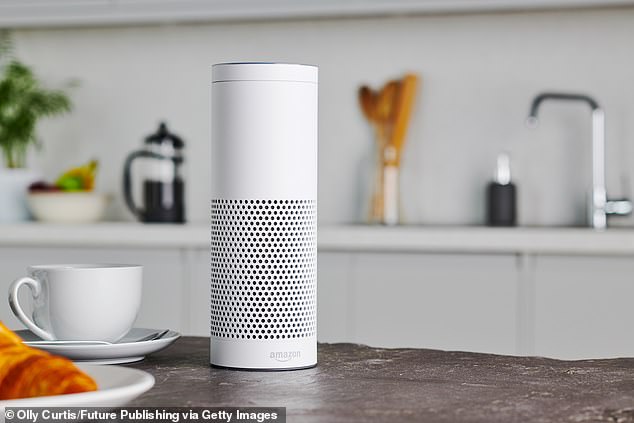 Voice-activated speakers (including the Amazon Echo) have soared in popularity in recent years, giving people a way to listen to music on demand or ask a search engine questions

The inclusion of peanut butter will also offset the importance of margarine in the oils and fats category, given the item’s recent price volatility.

The ONS has also split its monitoring of cola drinks into two, watching the prices of both regular and sugar-free versions to measure the impact of the Sugar Tax.

What was added to and removed this year from the basket of goods?

Meanwhile. in the home, crockery sets have been replaced by dinner plates to reflect the consumer tendency to buy dining items individually.

Similarly, the three-piece non-leather furniture suite has been supplanted by a single non-leather settee as more buyers opt for standalone pieces.

Complete dry dog food has been removed to make way for the more popular category of dog treats.

Voice-activated speakers have soared in popularity in recent years, giving people a way to listen to music on demand or ask a search engine questions.

Last autumn, the retailer Argos revealed that more British households now own a smart speaker than a pet rabbit.

Phil Gooding, senior statistician at the ONS, said the changes reflect changing lifestyles, adding: ‘This year, there are changes relating to technology, the home, and how we contact one another.

‘The introduction of smart speakers is one example of a relatively new product entering the basket. The addition of bakeware is, on the other hand, a nod to the resurgence of an item that has been in our lives for generations, but has seen its appeal renewed.

‘Finally, while the postman’s round may be lighter due to fewer people using envelopes (one of the items removed this year), this also perhaps points to a reliance on email, instant messaging services and social media.’

Around 180,000 separate price quotes are collected every month in compiling the price indices, covering about 700 representative goods and services.

The prices are collected in about 140 locations across Britain. Around 300,000 quotes are also used in measuring owner occupiers’ housing costs each month.

This time last year, pork pies and pasties were ditched from the typical shopping basket – and quiche was added in.

Action cameras such as Gopros, women’s exercise leggings and Amazon fire sticks were added to the list of goods in March 2018.

Bottles of beer brought in nightclubs were also been taken out – while digital media players including Amazon Fire TV and Apple TV were added for the first time.