The company’s third-quarter earnings far surpassed Wall Street expectations, helped by the acquisition of organic grocer Whole Foods and an increase in sales during its summer ‘Prime Day’ promotions.

As Amazon’s share price began to surge on the news, Bezos’s wealth shot up to more than $90 billion, according to calculations by CNBC and data from the Bloomberg Billionaires Index.

It is not the first time he has been the world’s richest person but his reign only lasted for one day, July 27th, this year. 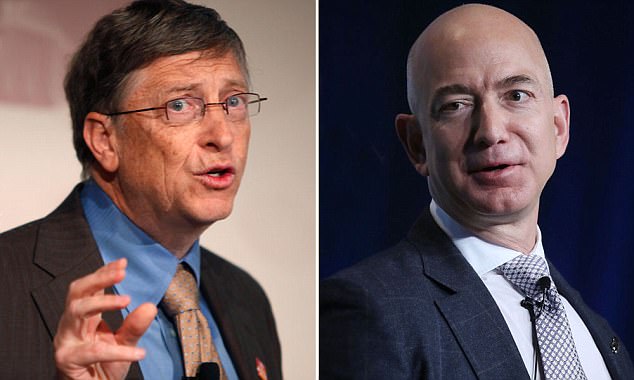 Bill Gates (left), the founder of Microsoft, was previously the world’s richest person. Gates is now only worth $88 billion

Amazon’s share price went over $1,050 and Bezos’ paper fortune pushed past $90 billion but when its share price fell, Bezos was again behind Gates.

Amazon that it expects sales to rise during the busy holiday-shopping season. Its shares soared 8 percent in extended trading after releasing the results.

It also announced a series of new voice-activated Echo devices and it kicked off a public hunt for a place to build its second headquarters.

It now employs more than 540,000 people, a 77 percent jump from a year ago, with some of that growth coming from the Whole Foods acquisition.

But the company said it has been also hiring software engineers, sales representatives and others to work on its cloud computing business, video streaming service and its devices.