Settlement and colonization of the moon is a ‘must’ if the human race is to survive, Amazon CEO Jeff Bezos (seen Friday in Los Angeles) has said

Settlement and colonization of the moon is a ‘must’ if the human race is to survive, Amazon CEO Jeff Bezos has said.

‘We must go back to the moon, and this time to stay,’ Bezos said.

Bezos, the world’s richest man, told a space development conference in Los Angeles on Friday that he is ready to help pave the way for further lunar exploration and eventual settlement with his rocket startup, Blue Origin.

The way Bezos sees it, the Earth will be zoned for residential use as well as light industries, while heavy industries that are the biggest polluters will be conducting their operations extraterrestrially.

He spoke before a meeting of the National Space Society, a non-profit group that advocates for building human colonies in space.

Ideally, while he would like to venture out into space together with the cooperation of the US government and the European Union, Bezos says he is willing to go it alone, according to The Wall Street Journal.

Bezos insists that lunar settlement isn’t a matter of choice, but one of necessity.

‘The alternative is stasis,’ Bezos said on Friday. 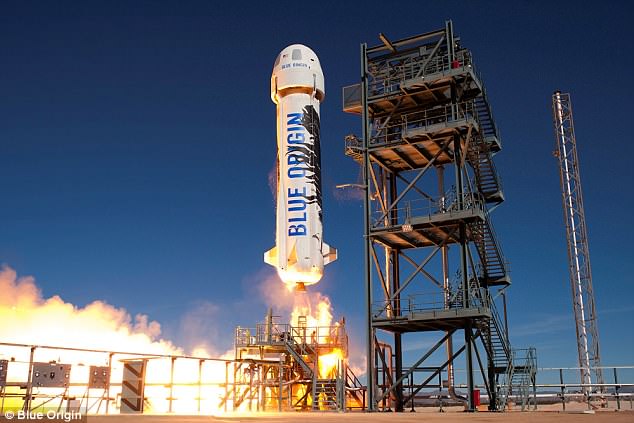 Bezos, the world’s richest man, told a space development conference in Los Angeles on Friday that he is ready to help pave the way for further lunar exploration and eventual settlement with his rocket startup, Blue Origin. A Blue Origin rocket is seen taking off in the above stock image

If humans do not expand into space, then communities on Earth ‘will have to stop growing’ because of environmental and other factors, according to the Amazon founder.

Bezos said: ‘The Earth is not a very good place to do heavy industry. It’s convenient for us right now.

‘In the not-too-distant future – I’m talking decades, maybe 100 years, it’ll start to be easier to do a lot of the things that we currently do on Earth in space, because we’ll have so much energy.’ 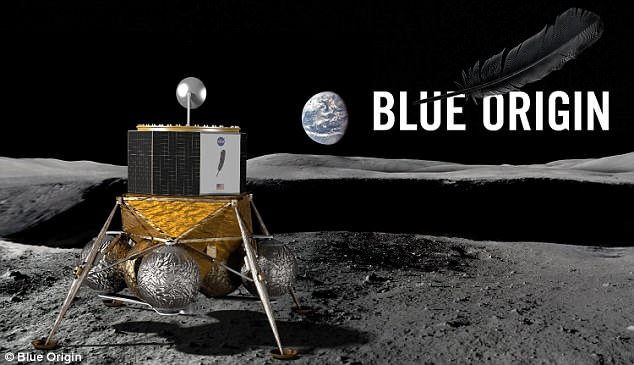 Bezos did not offer specific details about how he plans to realize his vision of lunar settlement, but he did note that his company has drawn up a design for Blue Moon (seen in the above promotional sketch), a lunar lander that can deliver 5 tons of payload to the moon’s surface

While SpaceX CEO Elon Musk thinks that Mars will be the next planet targeted for human colonization, Bezos says the moon makes more sense, according to Geek Wire.

First off, the moon is located closer to the Earth – just a two-day trip via rocket.

The moon is also believed by scientists to hold deposits of water ice near the poles.

These deposits could be converted into drinkable water, breathable air, and even energy for rockets.

‘It’s almost like somebody set this up for us,’ Bezos said. 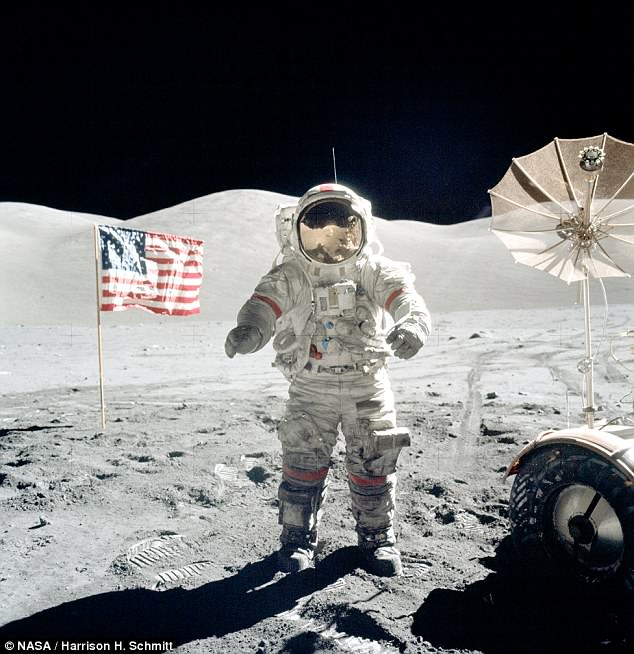 Bezos said: ‘We will have to leave this planet. We’re going to leave it, and it’s going to make this planet better.’ The last man to walk on the moon, Eugene Cernan, is seen above on the Apollo 17 mission in December 1972

Bezos did not offer specific details about how he plans to realize his vision of lunar settlement, but he did note that his company has drawn up a design for Blue Moon, a lunar lander that can deliver 5 tons of payload to the moon’s surface.

Bezos hopes that with help from NASA, the Blue Moon will be up and running sometime within the next decade.

‘We’ll do it eventually. We could do it a lot faster if there were a partnership.’

He said that more needs to be done to accelerate private space travel.

Bezos said that the breakthroughs being made by Blue Origin are ‘the most important work I am doing.’

He said that this will be a cooperative effort involving numerous other companies and entities or ‘I’ll run out of money.’

Bezos is estimated by Forbes to be worth more than $130billion.

THE BILLIONAIRE SPACE RACE: THE DETAILS

The richest man in the world, Jeff Bezos is pursuing Blue Origin with vigour as he tries to launch his ‘New Glenn’ rocket into low-Earth orbit by 2020.

Whilst Bezos is yet to leave the atmosphere of Earth, despite several successful launches, Elon Musk’s SpaceX programme has already sent the Falcon Heavy rocket into space.

On February 6 2018, SpaceX sent the rocket towards the orbit of Mars, 140 million miles away.

On board was a red Tesla roadster that belonged to Musk himself.

SpaceX have won several multi-million dollar contracts from Nasa as the space agency hopes to use the rockets as a fast-track for its colonisation of the red planet.

The billionaire mogul also said he expects Elon Musk to win the race to Mars with his private rocket firm SpaceX.

SpaceShipTwo will carry six passengers and two pilots. Each passenger gets the same seating position with two large windows – one to the side and one overhead.

A climb to 50,000ft before the rocket engine ignites. Passengers become ‘astronauts’ when they reach the Karman line, the boundary of Earth’s atmosphere, at which point SpaceShipTwo separates from its carrier aircraft, White Knight II.

The spaceship will then make a sub-orbital journey with approximately six minutes of weightlessness, with the entire flight lasting approximately 3.5 hours.