Now that really is an express delivery! Hilarious moment Amazon driver turns his round into a workout by SPRINTING to a house before doing leg raises on the porch

An Amazon delivery driver decided to get his days worth of exercise while delivering parcels by sprinting to the door of a property and carrying out push-ups and leg raises.

Comical footage, captured by homeowner Kate-Gibson Woods, 30, from Virginia Beach, U.S, shows the lively courier sprint towards her house and place the parcel on the front porch.

The Amazon worker then lays on the ground and raises his legs before moving them in a paddling motion.

The Amazon delivery driver runs towards the property in Virginia Beach, U.S, and breaks into an exercise routine

During the clip, which was captured on May 15, the courier runs towards the house and jumps onto the stone steps leading up to the property.

He then enters details onto his phone before placing the package at the front door.

Within seconds, the courier is on his back and carries out leg raises before swiftly turning over and completing eight push-ups.

The worker then clambers back to his feet and sprints into the street. 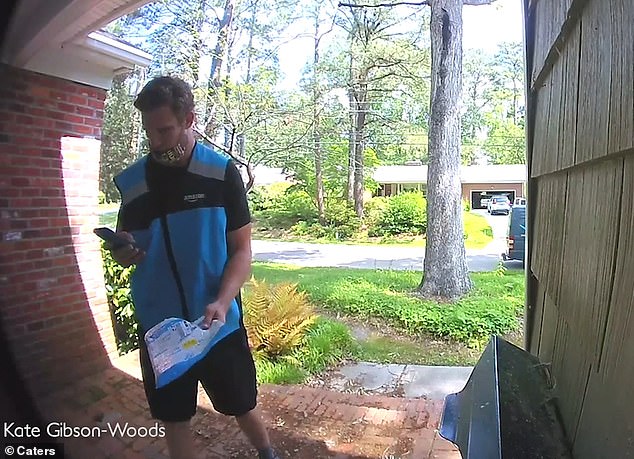 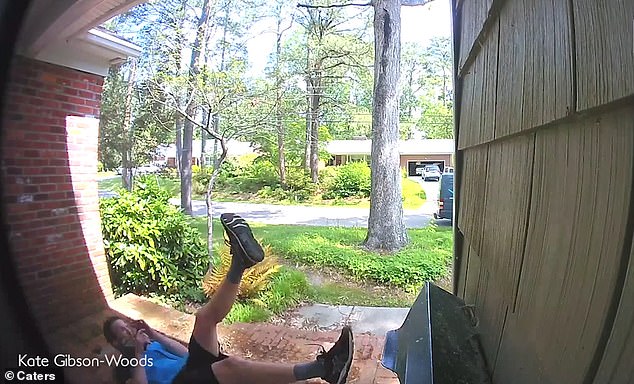 The worker, who was captured on the homeowner’s video doorbell, raises his legs before turning over and completing eight push-ups

Ms Gibson-Woods captured the moment her Amazon delivery driver broke out into a work out on her porch, after she received a notification from her video doorbell that somebody was at the door.

She said: ‘I just laughed because it’s a pretty clever way to get some exercise in while gyms are closed

‘I tried to run to the front door but he’d run off by the time I got there.

‘I have been looking out for him but haven’t seen him since.’