Amazon workers are being accused of being ‘robots’ who are ‘spreading propaganda’, after praising the company’s working conditions on social media.

Amazon hired the army of unnerving Twitter ‘Ambassadors’ in August 2018 to share upbeat tweets about life working inside one of the firm’s infamous warehouses.

But the concept went viral last week when Amazon ambassadors rushed to defend the company from negative comments in a tweet advertising tours of its Fulfillment Centers (FCs).

One woman called Wren from South Carolina wrote: ‘I like Amazon. We offer such amazing goods and services! And me and my coworkers are ALWAYS happy. Why wouldn’t we be when we work for such an AMAZING company like Amazon?’

Another said praised the company for having sanitizer in the restrooms, which she’s able to use at any time ‘without permission’.

After a series of responses from the Ambassadors, one person asked: ‘Are you a robot, did they make a bunch of AI to lie for them instead of helping real workers?’ 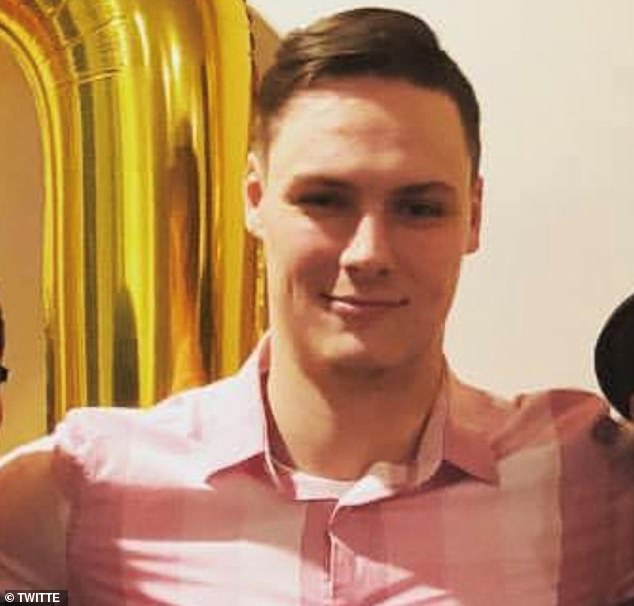 Tweets by the Amazon Ambassadors like Dylan from Pennsylvania, who work in warehouses across the US for the company, quickly went viral as other social media users accused them of being robots

Amazon FC Ambassadors often defend the company  online, but many have been left confused by their bizarre robotic tweets

Amazon’s fulfilment centres were branded one most dangerous places to work in the US by the National Council for Occupational Safety and Health in a damning report published in April 2018.

Later that year, Amazon changed the name of its warehouses to Fulfilment Centres and launched the ambassador programme, which sees employees praising the company’s working conditions on Twitter.

Each account is eerily similar in its look and tone, with users only using their first name, and including ‘Amazon FC Ambassador’ in their Twitter handle.

The recent Twitter thread began when one social media user questioned the working conditions of Amazon works after spotting the company was offering tours of their Fulfilment Centers. 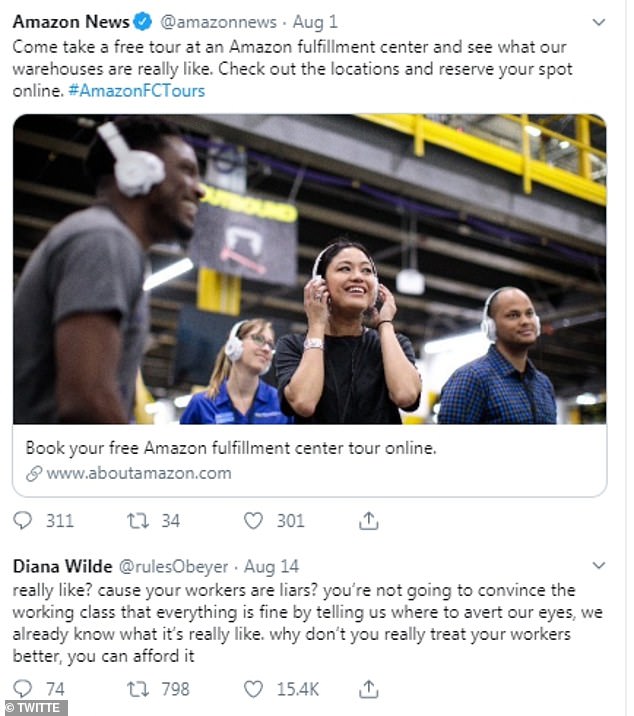 Diana Wilde’s original tweet in response to Amazon quickly went viral, drawing the attention of the company’s ‘Ambassadors’ who swooped in to praise the workplace

She posted: ‘Really like? Cause your workers are liars?

‘You’re not going to convince the working class that everything is fine by telling us where to avert our eyes. We already know what it’s really like. Why don’t you really treat your workers better, you can afford it.’

As other users quickly flooded Diana’s post’s with comments, Amazon’s FC Ambassadors were quick to respond to defend the company.

Ambassador Dylan tweeted: ‘Everything is fine, I don’t think there is anything wrong with the money I make, or the way I am treated at work.’ 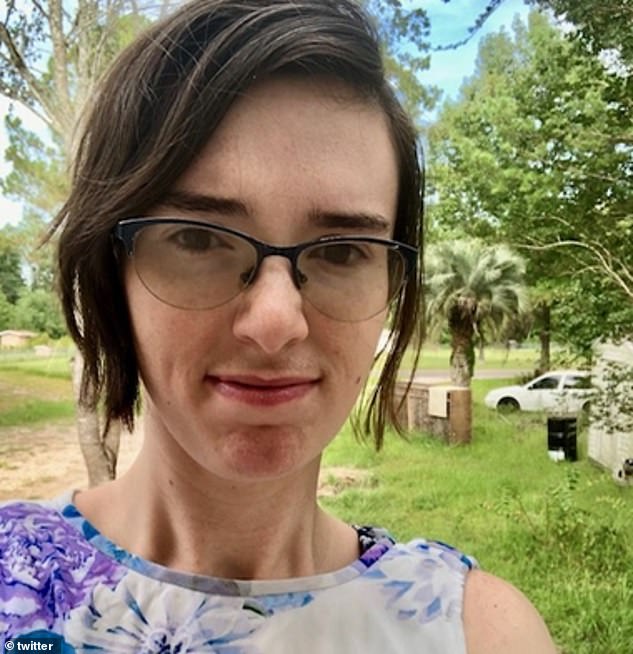 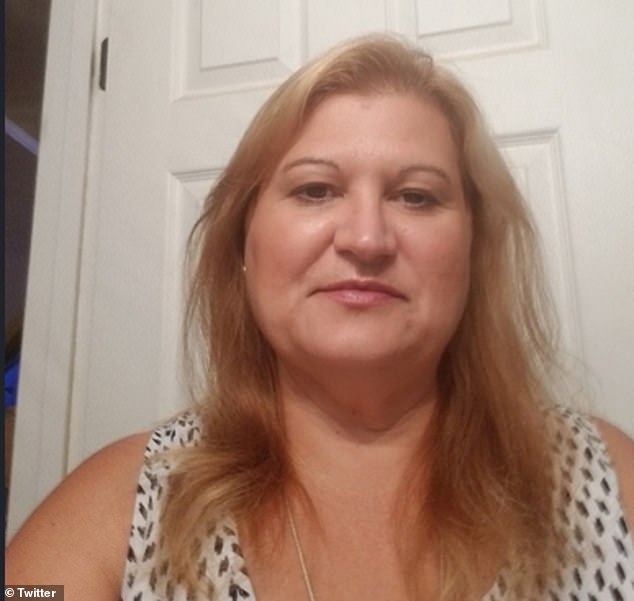 Amazon FC Ambassador Audra was one of those defending the company online, writing: ‘I’m not a drone’

And when another social media user suggested working at Amazon had given them depression, Amazon FC Ambassador Hannah from Florida responded: ‘I suffer from depression too, and at one point I wanted to quit Amazon.

‘But I realized it was my fault for the problems I was dealing with, and not Amazon’s. I’m allowed to talk to people, but sometimes I don’t want to. Now I have some great coworkers to pass the nights with.’

As the thread quickly went viral, other social media users couldn’t help but mock the accounts and questioned their validity, suggesting the accounts had been ‘paid’ to say they liked the company, or were ‘drones’ or ‘AI’ who were ‘preaching propaganda’.

Diana questioned: ‘Are you a robot, did they make a bunch of AI to lie for them instead of helping real workers?’

Why has Amazon been criticised over it’s treatment of employees?

Amazon has been accused of ‘dehumanizing’ its staff to deliver products to customers.

Workers at the internet shopping giant’s distribution centers face disciplinary action if they lose a punishing race against the clock to track down items ordered by online shoppers.

Staff paint a picture of a stressful environment ruled by the bleeps of handheld devices – nicknamed ‘the gun’ – instructing them which items to collect.

Bosses are said to push staff so far past breaking point that they ‘practically combust’, while regular sackings to keep workers on their toes were described by one HR manager as ‘purposeful Darwinism’.

According to an expose last year, the company’s best workers are known as ‘Amabots’ – because they are so ‘at one with the system’ they are almost cyborgs.

In November shocking claims were made about the online retailer’s newest warehouse – which the company refers to as a ‘fulfilment centre’ – in Tilbury, Essex.

The packing plant is the biggest in Europe, the size of 11 football pitches, and is due to ship 1.2million items this year.

In November shocking claims were made about the online retailer’s newest warehouse – which the company refers to as a ‘fulfilment centre’ – in Tilbury, Essex +11

In November shocking claims were made about the online retailer’s newest warehouse – which the company refers to as a ‘fulfilment centre’ – in Tilbury, Essex

The investigation, by an undercover reporter for the Sunday Mirror who spent five weeks there, suggested workers suffer mentally and physically as they try to meet demand.

He said that some of his colleagues were so tired from working 55-hour weeks that they would ‘sleep on their feet’.

‘Those who could not keep up with the punishing targets faced the sack – and some who buckled under the strain had to be attended by ambulance crews,’ he added.

Just the following month it emerged Amazon delivery drivers are asked to drop off up to 200 packages a day, are paid less than minimum wage and urinate in bottles because there’s no time to take a break

Legal firm Leigh Day, which led a case against taxi giant Uber, is representing seven drivers who say the agencies used by Amazon are mistreating them.

While Amazon does not employ the drivers directly, the drivers, who are recruited through agencies, work via an Amazon app and follow delivery routes made by the company.

But drivers who are given up to 200 packages a day to deliver, say that traffic jams, weather and speed limits make it near impossible to deliver all of the parcels in a timely fashion.

A spokesperson for Amazon said: ‘Amazon provides a safe and positive workplace. The safety and well-being of our permanent and temporary associates is our number one priority.’

Amazon FC Ambassador Rafael, from Washington, responded: ‘Nope, I am not a robot, mam. I was just sharing something from the FC that are all from me and my experience.

‘That would be a crazy technology to artificialize thoughts. I am actually a picker inside the FC, and was given a chance to be an ambassador here in social media.’

A recent tweet from Rafael’s ambassador account reveals he’d been absent from work for over a week, but was able to ‘cover it up using my time bank. (Personal, Sick, and Vacation).’

It prompted further comments that he must be a ‘robot’, while one follower replied: ‘Let me translate this for you: they eliminated sick days and forced you to use up vacation days when you are too sick to come into work.’

Another ambassador called Cindi, from Ohio, posted: ‘We’re not paid to say that we like our job. The FCA role is to educate others about what we do on our day-to-day at Amazon. Its just happened that we enjoy what we do.’

Meanwhile, worker Audra from Texas posted: ‘I’m not a drone and I don’t have any time constraints going to the bathroom where I need to earn time to go pee.

In a separate post, she praised the company’s restroom facilities, saying: ‘We have restrooms all over our FC and we’re free to use them whenever we want without permission. 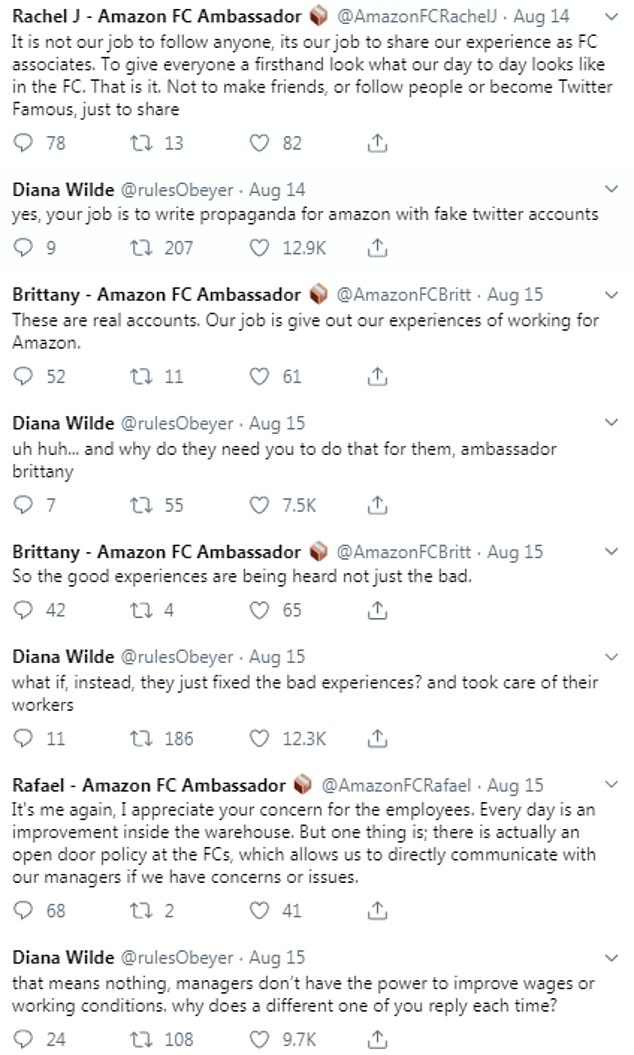 Social media users were left stunned by the series of responses from the company’s ambassadors, which were all written in a similar tone

‘Give us a break, we are real people trying to tell our experiences. Just because you don’t agree with us doesn’t make us less real or that we are spreading propaganda.’

She went on to suggest she did not want to unionize as her working conditions were ‘good’ and she received ‘great benefits’.

Another worker, Amazon FC Ambassador Brittany said: ‘These are real accounts. My job is to give out our experiences of working for Amazon.’

A spokesperson for Amazon told MailOnline: ‘FC ambassadors are employees who work in our FCs and share facts based on their personal experience.

‘It’s important that we do a good job educating people about the actual environment inside our fulfillment centres, and the FC ambassador programme is a big part of that along with the FC tours we provide.

They added: ‘Thousands of guests across the world have come to see for themselves what it’s like to work inside one of our FCs. If you haven’t visited, we recommend it.’