Amazon planning to build physical shops across the South of England

Amazon is planning to build physical shops across the South in an assault on our struggling high streets.

The online giant has invited bids from potential partners to find retail space for its Amazon Go stores, according to documents seen by the Daily Mail.

There are nine of the shops in the US, selling ready-to-eat food and take-home meal kits.

Customers use the Amazon Go app, and any items they take from the shelves are added to a ‘virtual trolley’ which is automatically charged to their Amazon account when they leave the store.

Machine learning and ‘computer vision’ detect when items are removed from the shelf.

In the first move to bring Amazon-branded shops to the UK, the company issued a request for retail estate brokers in October and selected a representative later the same month, the documents suggest. It is not known whether an agreement has been signed.

The stores will be built in London or counties ‘including, but not limited to’, Surrey, Kent, Berkshire, Buckinghamshire, Hertfordshire, Essex, and Middlesex, the documents, prepared by Amazon’s real estate planning boss, indicate. 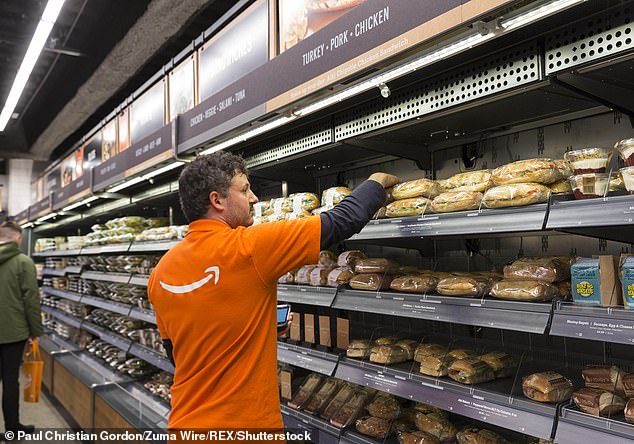 Amazon has  nine of the shops in the US,pictured is the Seattle store, selling ready-to-eat food

Industry sources said the stores will be between 4,000 and 5,000 sq ft. Amazon declined to comment.

The US shops are in city centre locations – if Amazon pursues a similar strategy in the UK, they would likely be on major high streets.

The Daily Mail has campaigned for a review of business rates and lower city centre parking charges to save Britain’s ailing high streets.