Amazon Prime users are furious about the announcement that the subscription fee for the delivery and streaming service will be increasing by 20 per cent.

The US technology giant sent an email to customers yesterday stating that the monthly price of Prime will go from £7.99 to £8.99.

The price change will be implemented as of September 15 for new customers, or on the date of the next renewal for existing customers.

Annual membership will also increase from £79 to £95 per year in the UK.

Customers took to Twitter to express their outrage at the ‘disgusting’ price hike, which Amazon has blamed on ‘increased inflation and operating costs’. 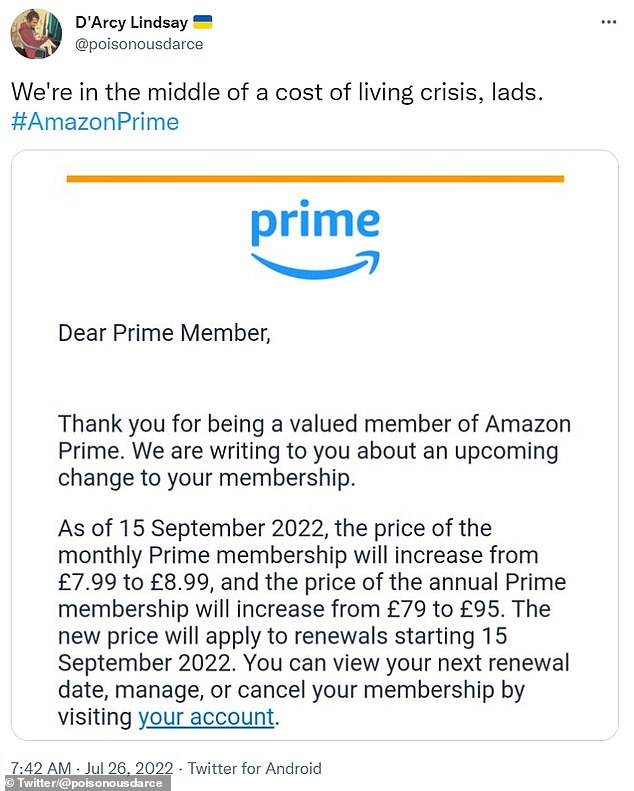 Customers took to Twitter to express their outrage at the ‘disgusting’ price hike for the Prime service, that Amazon has blamed on ‘increased inflation and operating costs

From September 15 for new customers, or on the date of the customer’s next renewal, Amazon will increase the cost of its Prime subscription.

Subscribers have described the increase as ‘disgusting’ and ‘a disgrace’, with one referencing how the company’s net income was $33bn (£28bn) in 2021.

Twitter user @poisonousdarce shared a screenshot of the email she received this morning announcing the price change, stating ‘We’re in the middle of a cost of living crisis, lads.’

Others are confused as to why the annual subscription fee has increased by £16, but the monthly fee by just £1.

This means that annual customers will be paying £4 more each year than monthly customers for the same service.

A spokeswoman for the company said: ‘Prime offers the best of shopping and entertainment, and continues to improve each year. 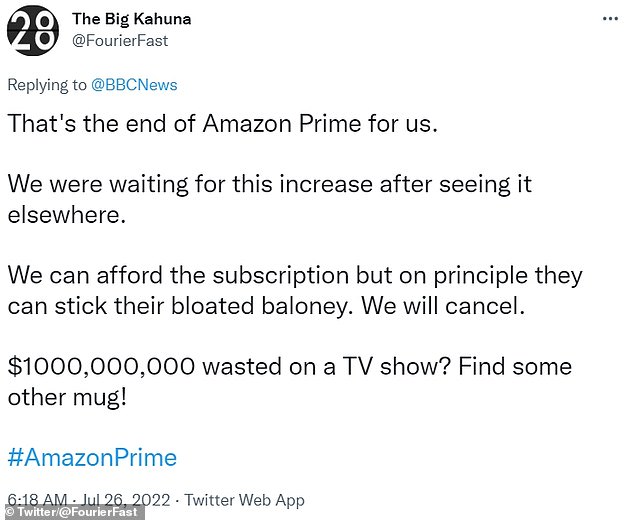 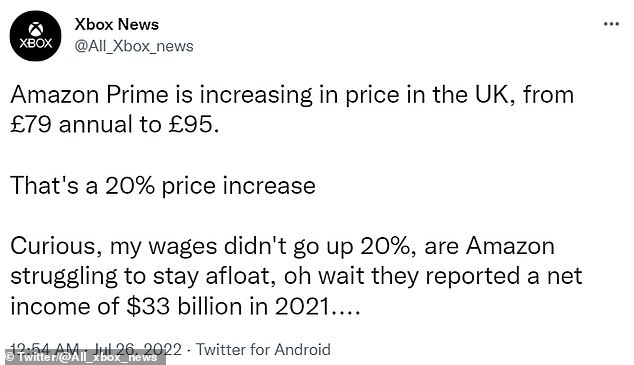 Subscribers have described the increase as ‘disgusting’ and ‘a disgrace’, with one referencing how the company’s net income was $33bn (£28bn) in 2021

‘With increased inflation and operating costs in the UK continuing to rise, we will change the price of Prime.’

Amazon has pumped billions of pounds into its streaming content in recent years, with original series such as The Boys and The Terminal List.

In September, the Prime Video platform will release The Lord Of The Rings: The Rings Of Power series, which cost an estimated £750 million in rights and filming costs.

The company is also investing millions into sports rights, having earlier this month secured the rights to show some Champions League matches from 2024, adding to its rights for 20 Premier League games each season.

The Prime price increase is the service’s first since 2014.

It comes months after Netflix increased basic and standard plans by £1 a month, while its premium plan was pushed £2 higher, only 18 months after a previous increase. 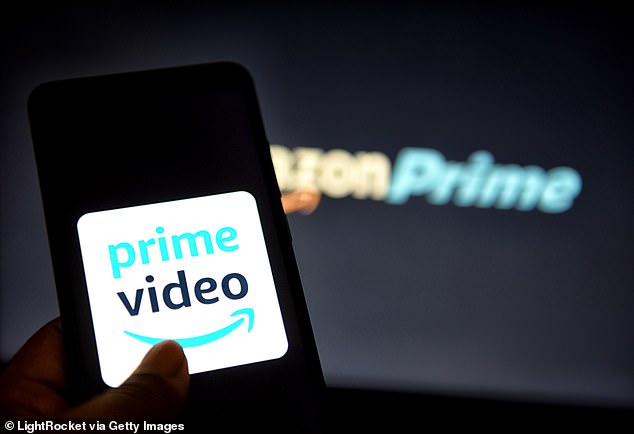 Amazon has announced that it will hike the price of its Prime delivery and streaming service for UK customers, blaming ‘increased inflation and operating costs’

The streaming giant said the price changes would allow it to ‘continue investing in best in class UK productions’ and ‘offer a wide variety of curated quality shows and films’ to customers.

The UK is Netflix’s biggest production hub outside the US and Canada, with a $1 billion dollar UK production budget in 2020.

Netflix’s decision to hike prices again came amid controversy over the cost of living in the UK, and sparked backlash from some users.

However, one user pointed out that the UK public can enjoy Netflix at a cheaper price than the TV licence, which costs £159 a year (averaging £13.25 per month).

Also, at £6.99 per month, Netflix’s basic package is still cheaper than some of its closest streaming rivals – Disney+ and Amazon Prime (both currently £7.99 per month).