Amazon is making up to 85 per cent profit on sales of a book written by a Nazi-sympathising far-right leader who writes about the ‘alleged’ holocoust.

The online retail giant agreed to print The Fall of Western Man by Mark Collett and is taking a large cut in the sales, which is being sold on the site for £15, the Times revealed.

In the book, the leader of Patriotic Alternative, 41, reveals that he would have been ‘proud’ to have taken part in Hitler’s Nuremberg propaganda rallies.

Amazon is making an 85% profit on sales of a book The Fall of Western Man which is written by a far-right leader, Mark Collett, (pictured) who writes about the ‘alleged’ holocoust

In the 324-page book, that has also been downloaded over 30,000 times online, Collett praises the Nazis at the Nuremberg rallies, saying: ‘Those in attendance wore uniforms, looked healthy and were of good breeding stock.’

He also denies holocoust took place, stating that in terms of ‘white guilt’, nothing is pushed more strongly than the ‘alleged extermination of six million Jews at the hands of the German people’.

Collett writes that the future of Western man ‘lies in the wombs of the Western female’, however, Western man has no future if they are ‘occupied by the seed of a foreign people’.

He continues: ‘Would Western man have what it takes to actually participate in an ethnic conflict without fearing that he was in some way ‘racist’ for raising a hand in self-defence?’ 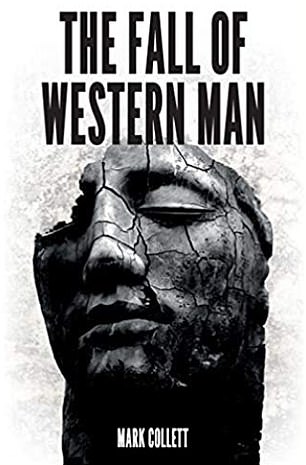 The author of the book (pictured), which is being sold on the site for £15, reveals he would have been ‘proud’ to have taken part in Hitler’s Nuremberg propaganda rallies

The Fall of Western Man, which was published in 2016, has 93 per cent positive reviews on the Amazon website, with the majority giving it five or four stars.

However, a reviewer who gave it one star described it as: ‘[An] absolute cesspit of racism, can’t believe amazon sell this.’

Collett is the leader of far-right movement Patriotic Alternative, which claims to have 15,000 supporters and campaigns for non-whites to leave Britain.

He is one of Britain’s most high-profile white supremacists and was the former chairman of the Young BNP, the youth division of the British National Party (BNP), before the party expelled him.

In a comment to The Times, Collett confirmed that Amazon withholds ‘the vast majority’ of the money made by the book.

He also denied that he supported Nazi ideology, saying: ‘I am not a National Socialist. I wasn’t around in 1930s Germany.’

Amazon’s ‘Kindle Direct Publishing’ provides a print-to-order service which prints books on demand, keeping at least 30 per cent of royalties and also charges for printing. A projection provided to writers shows that authors surrender 85 per cent of the list price.

An Amazon spokesperson told MailOnline the book is self-published and added: ‘It is factually inaccurate to state that Amazon keeps 85 per cent of the money paid by readers/customers of this book.’