Amazon’s automated human resource systems has been floundering under an influx of sick-leave and backpay requests due to COVID-19 according to Bloomberg.

An investigation by Bloomberg reports that the some of the company’s workers, many of whom have been hit by COVID-19, have been nearly unable to interface with the company’s heavily automated human resources division.

Instead of dealing with human employees, Bloomberg, who interviewed six employees who work in warehouses from Indiana to New Jersey, reports that workers have been mired for hours on the phone and dealing with chatbots designed to fulfill requests automatically.

Amazon’s automation, designed to handle human resources requests, has failed to keep up with an inflix of demand spurred by COVID-19, Bloomberg reports. File photo

As a result, Amazon’s automation has wrongfully initiated termination proceedings on some employees who are sick or recovering from COVID-19 for allegedly missing shifts.

It has also reportedly denied sick-leave to some workers who have documentation of being ill or needing to take care of those who are sick according to Bloomberg.

One employee told Bloomberg that the company’s system accidentally put her on unpaid leave after she requested to be compensated for sick time due to being diagnosed with COVID-19.

The employee reportedly spent days trying to contact HR and hours on hold only to be patched through to a call center worker in India who could not rectify the mistake.

According to employees working with Amazon’s human resources division, the dysfunction has been exacerbated by Amazon’s goal of reducing its human workforce to focus more heavily on automation. 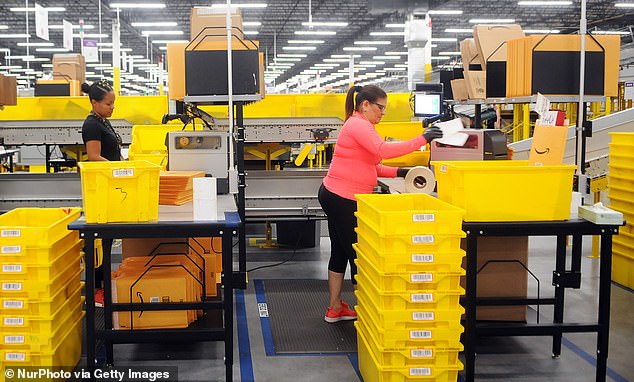 ‘[Human resources] is always struggling to automate and keep pace with the scale of the company,’ one anonymous employee told Bloomberg.

‘The horror stories happen because [HR] people are overwhelmed. And they don’t have the resources and the mental capacity to deal with [workers] because they’re pulled in so many different directions. It’s bound to have negative, real-life human impacts.’

A report last year from The Verge shows that Amazon uses a stringent set of metrics to not only track the performance of workers in its warehouses but to automatically terminate their employment if they fail to meet certain standards.

In one facility located in Baltimore, the investigation found that approximately 300 full-time workers in one facility were fired for inefficiency between 2017 and 2018 – a figure that represents 10 percent of the factory’s overall workforce.