Amber Alert issued after New York City boy, 15, is abducted in a white minivan by his 28-year-old brother – and police say the teen is ‘in imminent danger of serious harm or death’

An Amber Alert has been issued to New York City residents over the abduction of a 15-year-old boy.

The NYPD say Ahsan Ali was snatched from 46th Avenue in Queens shortly after 4:30 a.m. Wednesday in a white Toyota Sienna minivan.

The teen is believed to have been taken by his 28-year-old brother, Mohsin Ali, 28.

Ashan was ‘taken under circumstances that lead police to believe’ that he is ‘in imminent danger of serious harm and/or death’, WCBS 880 reports.

An Amber Alert has been issued over the alleged abduction of Ashan Ali (left). Authorities believe he is in the company of his older brother Mohsin Ali (right)

Police have not given anymore details as to the nature of the pair’s relationship or family situation.

Ashan is described as being around five feet six inches tall, and weighing around 120 lbs.

The NYPD suspect they may be traveling to Connecticut. 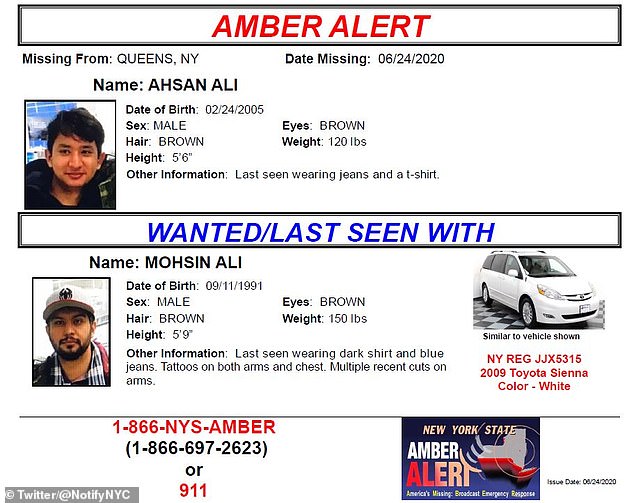 Anyone with information is urged to called 911. Police believe Ashan Ali is in ‘imminent danger’