Amber Heard indulged in a spot of retail therapy after spending another day fighting her estranged husband in court yesterday.

The 34-year-old actress and her partner Bianca Butti strolled hand-in-hand through London, browsing shops including the Apple store.

The duo strolled around Oxford Street before they were joined by Amber’s sister Whitney and her personal assistant.

The group enjoyed a walk around the Capital ahead of another day at the Royal Courts of Justice, which is today hearing evidence from Johnny Depp’s ex-fiancée Winona Ryder. 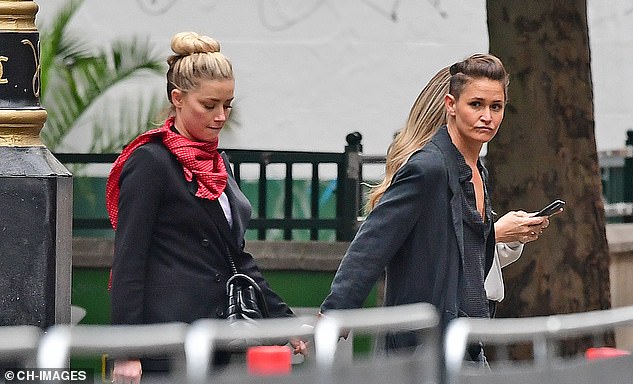 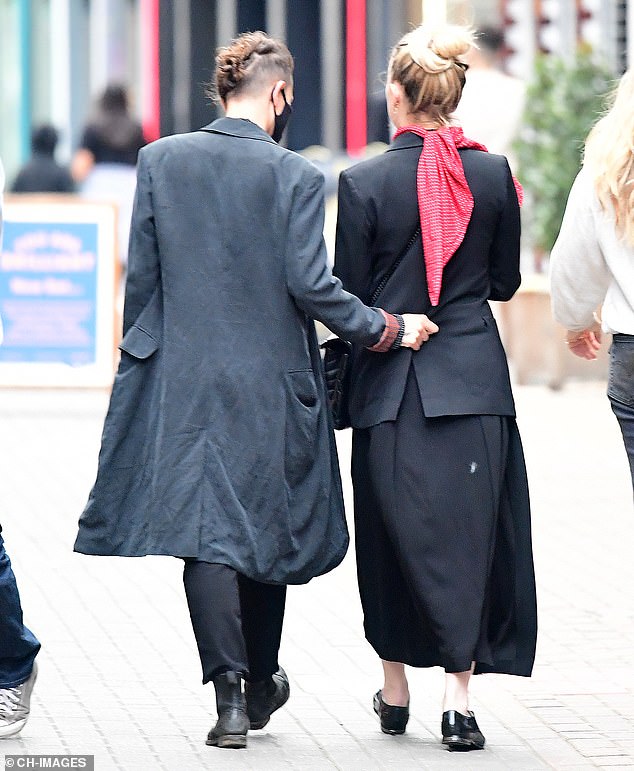 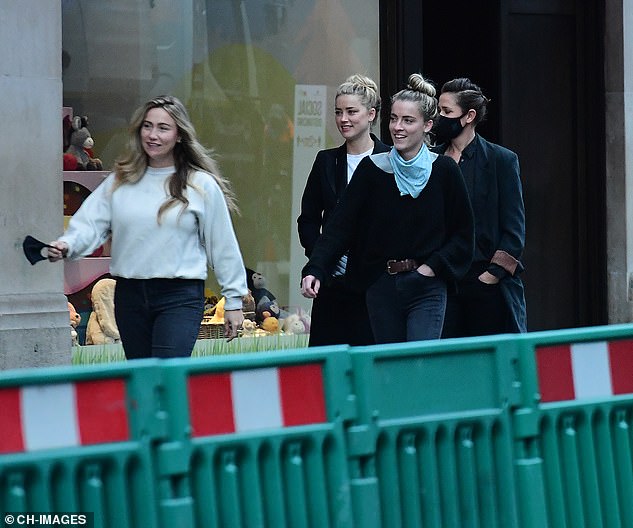 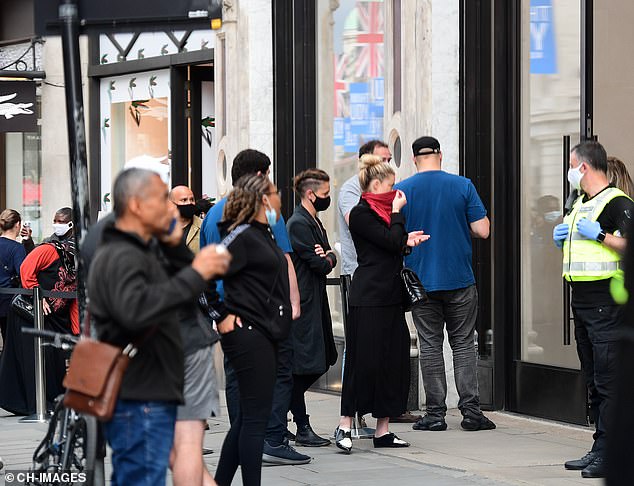 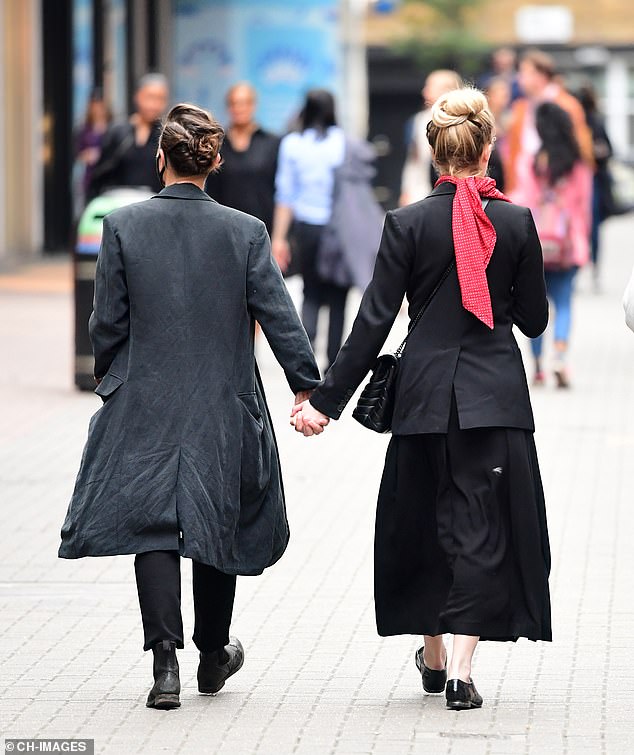 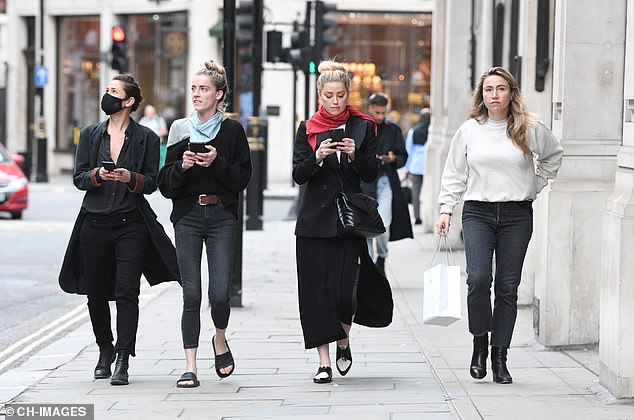 The group removed their masks as they walked around the Capital, with Heard’s assistant clutching a shopping bag

The shopping trip came after another day in court, where Depp is suing the Sun’s publisher News Group Newspapers (NGN) and its executive editor Dan Wootton over an April 2018 article which alleged he was violent towards ex-wife Amber Heard during their relationship 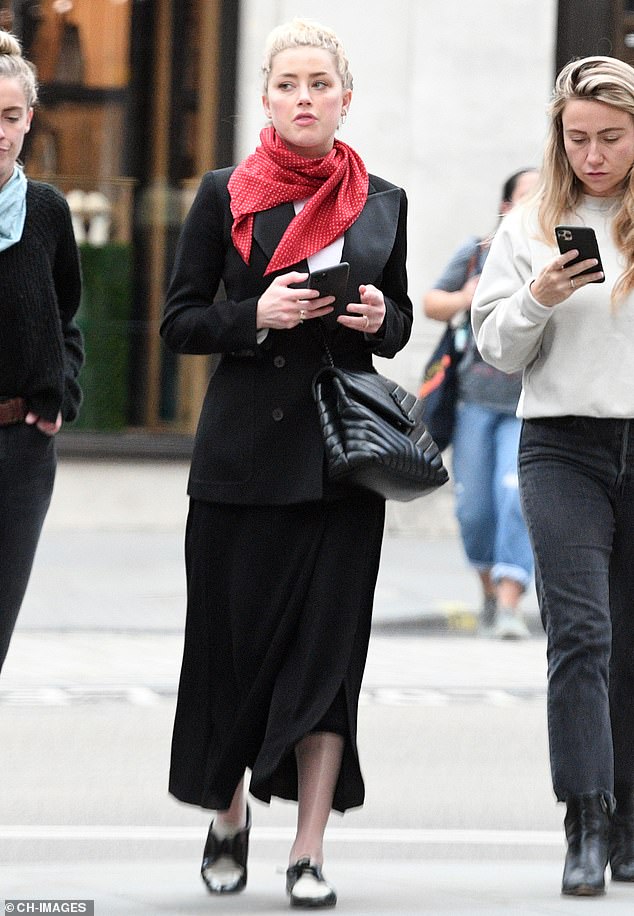 The actress went shopping ahead of another round in court, where Johnny Depp’s ex-fiancee Winona Ryder will appear via video link today

Amber and Bianca’s romance was first made public at the start of the year – when the pair were spotted kissing while on an outing in Palm Springs in January.

Bianca was the only member of the group who was wearing a face mask during the outing in London, which may well be an indication that she is taking extra precautions amid the pandemic in order to protect her health after it was revealed in 2019 that she had been diagnosed with breast cancer for a second time.

The cinematographer, who is in her late 30s, was first diagnosed with breast cancer in 2015 when she was 34, and after undergoing what she described as a ‘traditional western program of chemo, surgery, and radiation’, was declared cancer-free three years ago.

However in 2019, she revealed on a GoFundMe page set up to help pay for her medical bills that doctors had found another tumor on her right breast in March of that year.

‘I will say that getting a cancer diagnosis for the second time, is a lot less scary than the first time,’ she wrote on the page, which was published in August last year.

‘After being diagnosed a few years ago, I did a lot of research about breast cancer and cancer in general. For cancer round two I felt more patient and well informed about what my options were for treatment.’

The shopping trip was the latest in a string of outings across London, where the group are staying for the trial.

Amber has previously been seen partying with her glamorous squad, dubbed ‘Team Heard’ who have rallied around her throughout the case.

‘Team Heard’ is made up of her sister Whitney, girlfriend Bianca, British legal advisor Jennifer Robinson, who is friends with the Clooneys, American attorney Elaine Bredehoft and the actress’ assistant Sara, whose last name is not known.

The group are in court again today as the acrimonious battle continues.

Amber travelled with a ‘large number of cases of wine’, regularly drank two bottles a night and started most of the arguments with Johnny Depp, the actor’s former estate manager told the hearing today.

Ben King also released a photograph of the carnage left at a property in Australia in March 2015 after the couple were said to have had a fight which resulted in Depp’s finger being partially severed.

The estate manager also said the couple’s rows ‘could start from very banal beginnings’ and they would be ‘like school children’, claiming Heard was the ‘antagoniser and more aggressive’ and Depp was ‘always polite’.

Later today, Depp’s ex-fiancee Winona Ryder is set to appear at the court in London via videolink from Los Angeles in support of the actor’s sensational libel claim against the Sun over an article that labelled him a ‘wife beater’.

Depp is suing the Sun’s publisher News Group Newspapers (NGN) and its executive editor Dan Wootton over an April 2018 article which alleged he was violent towards ex-wife Amber Heard during their relationship. 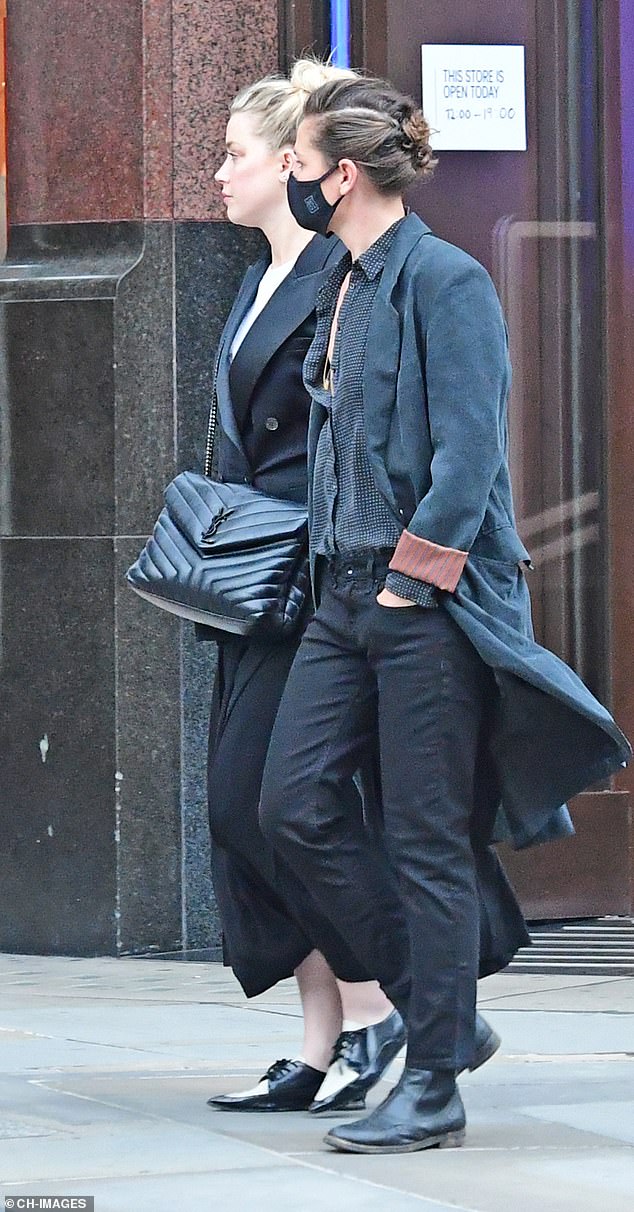 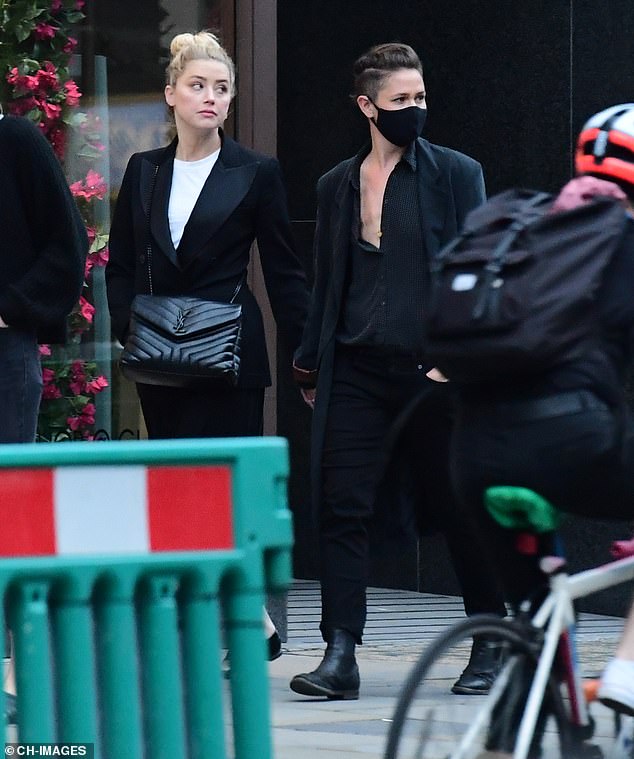 The pair have been in the Capital for several days, as the acrimonious court battle continues

Stranger Things actress Winona Ryder, 48, had a relationship with Mr Depp in the 1990s.

At a preliminary hearing in the case, part of Ms Ryder’s witness statement was revealed in court documents, which read: ‘I cannot wrap my head around (Ms Heard’s) accusations.

The court is also due to hear from actress and advocate for the £MeToo movement Katherine Kendall, who claims she was ‘misquoted’ in The Sun’s article.

The Pirates Of The Caribbean star is suing NGN and Mr Wootton over the publication of an article on April 27 2018 with the headline: ‘Gone Potty: How can JK Rowling be ‘genuinely happy’ casting wife beater Johnny Depp in the new Fantastic Beasts film?’

NGN is defending the article as true, and says Mr Depp was ‘controlling and verbally and physically abusive towards Ms Heard, particularly when he was under the influence of alcohol and/or drugs’.