Amber Heard has arrived at court for the closing stages of the bombshell libel trial in which a lawyer claims Johnny Depp was a ‘hopeless addict’ who ‘lost his self-control’ and attacked her.

The Hollywood star smiled and waved at fans at London’s Royal Courts of Justice this morning for the culmination of a court battle that has revealed lurid details about her relationship with former husband Johnny Depp.

Depp is suing News Group Newspapers (NGN), publisher of The Sun, and its executive editor Dan Wootton over a 2018 article which labelled him a ‘wife beater’.

Summing up for The Sun, lawyer Sasha Wass said the newspaper’s defence ‘is one of truth – namely that Mr. Depp did indeed beat his wife.’

Wass said there was ‘overwhelming evidence of domestic violence or wife-beating behaviour, cataloged over a three-year period.’

She said Depp was ‘a hopeless addict who repeatedly lost his self-control and all ability to restrain his anger.’

‘Permeating all of the evidence in this case is the character of Mr. Depp himself – his well-documented evidence of violence and destruction over his adult life which have occurred when he was under the influence of drink and drugs.’

She said Depp ‘was subject to irrational mood swings and abnormal behavioral patterns, which would not have been present when Mr. Depp was clean and sober, and Mr. Depp has a name for this metamorphosed entity – namely, The Monster.’

The former spouses have both been in court during three weeks of testimony at the grand neo-Gothic court building.

Ms Wass reminded Mr Justice Nicol there were ‘well-documented episodes of violence and destruction’ over Johnny Depp’s adult life and that the actor had accepted he was violent to inanimate objects but not people.

However, she said there was an incident earlier in his career when he assaulted a photographer with a plank of wood when under the influence of drink and drugs.

She also said his evidence that he was not violent towards people was ‘meaningless’ when he was as intoxicated as he was on occasions and ‘wouldn’t have known what he was doing’. 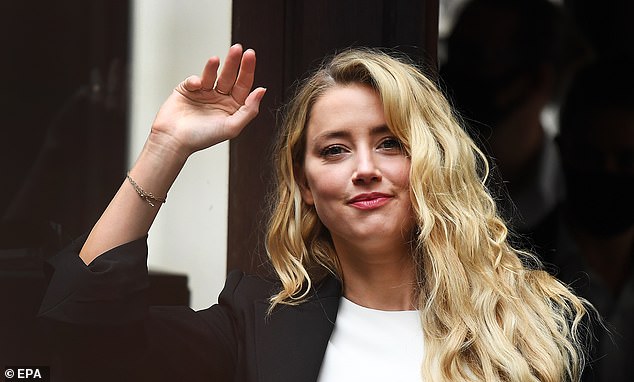 Sasha Wass QC continued: ‘In answer to what we suggest is overwhelming evidence of domestic violence or wife-beating behaviour, catalogued over a three-year period between 2013 and 2016, Mr Depp’s response is to claim that he is a victim of an elaborate hoax that has been perpetrated against him by Ms Heard and her friends.’

The barrister said Mr Depp had accused Ms Heard and her friends of ‘having painted on injuries, manipulated photographs and destroyed property which they then went on to photograph in order to create what he describes as some sort of insurance policy for Ms Heard’.

Ms Wass added: ‘What exactly Ms Heard was insuring against in the course of this hoax remains unexplained.’

She told the court that such a hoax ‘would have entailed Ms Heard engaging in a pre-planned conspiracy over the period of the entire relationship with Mr Depp’, adding: ‘Such a suggestion, we say, is risible.’

Ms Wass told the court: ‘The approach taken by Mr Depp from the time Ms Heard obtained a domestic violence restraining order against him on May 27 2016 was as follows: to deny that he ever assaulted Ms Heard, to accuse Ms Heard of being the violent party and to reverse his role with hers.’ 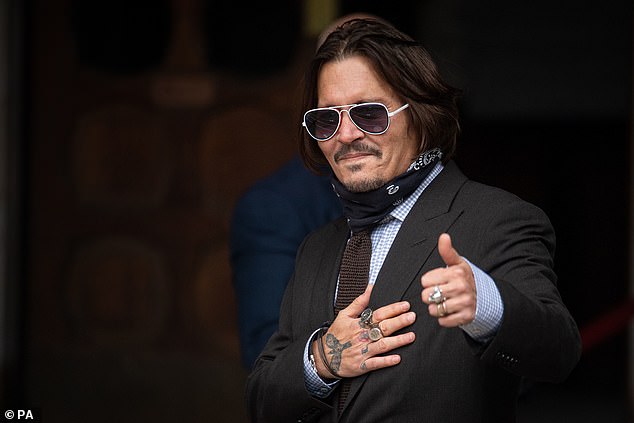 The barrister also referred to ‘the story released to the media and published in early June 2016 suggesting that Ms Heard had been arrested for domestic violence in the past, that incident dated back to 2009’.

She added: ‘It was no coincidence, we suggest, that this emerged within days of Ms Heard being granted protection of the court by way of a restraining order.

‘Shortly before that article was published in the press, Stephen Deuters, Mr Depp’s assistant, was receiving information from people by text who had clearly been prying into Ms Heard’s relationship with (her ex-partner, Tasya) van Ree.’

Ms Wass said: ‘No charges were brought against Ms Heard following her arrest and Ms van Ree herself has denied that any assault took place.’

She added: ‘This aspect of the case is a red herring.’

Ms Wass said that ‘there was another suggestion, or another attempt to resurrect the suggestion, that Ms Heard was the violent party’ last week when Ms Heard’s sister Whitney Henriquez was shown a video of herself on a reality show from 2006. 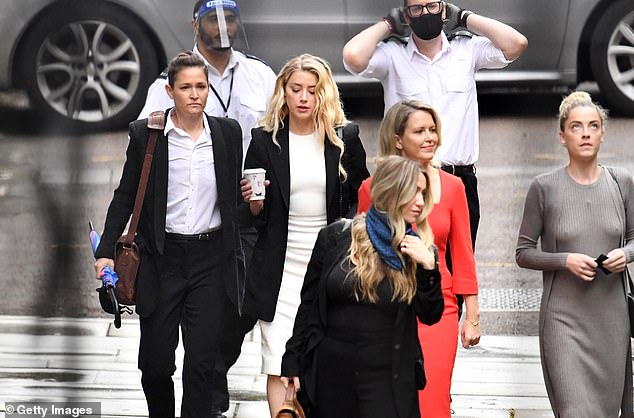 The barrister said Ms Henriquez ‘flatly denied that the fatuous exchange that was recorded on that television show was a reference to physical violence’ against her by Ms Heard.

Ms Wass added: ‘That piece of evidence is nothing more than a red herring – it has no bearing whatsoever on whether Mr Depp hit Ms Heard.’

Mr Justice Nicol intervened to say: ‘If it were the case that all that Mr Depp was doing, to the extent that he was violent towards Ms Heard, was defending himself then that would not assist the defendants in proving the truth of the alleged libel that Mr Depp is a wife beater.’

Ms Wass replied: ‘I agree, it would have to be unlawful violence, namely not in self-defence.’

Ms Wass continued that ‘the way the case has been put forward’ by Mr Depp’s lawyers ‘assumes that if it can be proved … Ms Heard had struck him on one occasion … this absolves Mr Depp from any responsibility for the many occasions when he assaulted her’.

She added: ‘It is as though Mr Depp is seeking to justify his physical assaults on Ms Heard on the basis that she may have deserved it from something she had done on some other occasion.’

Ms Wass said that the case was not about whether Ms Heard ‘fought back or even lost her temper’.

The barrister told Mr Justice Nicol: ‘The issue is whether Mr Depp used unlawful violence against Ms Heard and one only has to look at (a) picture of Ms Heard and Mr Depp together.’

Ms Wass showed a picture of the couple to the court, which she said gave ‘a clear indication of the respective physical capabilities’ of Mr Depp and Ms Heard.

She said: ‘One only has to look at that picture to see that Ms Heard lacked the physical capabilities to be the successful party in any fight.’

Ms Wass then referred to a recording of a conversation between Mr Depp and Ms Heard, in which the latter ‘told Mr Depp that no jury would believe that she, a woman weighing 115 pounds, would be able to beat Mr Depp’.

The barrister said: ‘The meaning of this sentence has been distorted by the claimant.

‘Ms Heard was not saying she could lie to a jury, she was saying that no right-minded person would believe that she, given their respective sizes, was beating him and that he was the defenceless victim.’

Ms Wass added: ‘This is only another example of Mr Depp attempting to reverse the role of victim and offender and this is a ploy that he has utilised throughout this case.

‘When he is accused of being a drug addict, he accuses her of being the heavy drug user.’

Lawyers, journalists and members of the public have heard lurid details of the couple’s tempestuous relationship, including prodigious drinking and drug consumption, furious arguments, hurled objects and a deposit of excrement left in a bed – whether by dog or human is disputed.

The Sun’s defence relies on 14 allegations made by Heard of violence by Depp between 2013 and 2016, in settings including his private island in the Bahamas, a rented house in Australia – where Depp’s finger was severed in contested circumstances – and the couple’s downtown Los Angeles penthouse, which was trashed during the couple’s altercations.

Depp denies all the allegations and claims Heard was the aggressor during their volatile relationship, which he has likened to ‘a crime scene waiting to happen.’ Several current or former employees gave evidence backing his version of events, and former romantic partners Vanessa Paradis and Winona Ryder gave witness statements saying he had never been violent to them.

During four days in the witness box last week, Heard stood by her allegations, claiming Depp flew into jealous rages and became a ‘monster’ under the influence of alcohol and drugs. She accused him of slapping and hitting her and throwing bottles at her ‘like grenades,’ and claimed that she often feared for her life during their relationship.

Heard’s evidence was backed by witnesses including her sister Whitney Henriquez, who said she had seen Depp hit Heard ‘multiple times’ during a fracas at the couple’s Los Angeles apartment in March 2015.

On Friday, Depp’s lawyers played a video, filmed years before Heard and Depp met, that showed a friend of Henriquez saying ‘I can’t believe Amber beat your ass.’ Depp’s lawyers said that was evidence of Heard’s violence, but her sister said they had only had a verbal altercation.

The case is due to end Tuesday, but judge Andrew Nicol is not expected to deliver his ruling for several weeks.