A body modification enthusiast who splashed out $120,000 on transforming her look from head to toe has broken down in tears after using foundation to cover up her tattoos to see what she looked like with a bare face.

Amber Luke, from Brisbane, Queensland, has spent $50,000 on nearly 600 tattoos, including blue ink injected into her eyeballs during an excruciating 40-minute procedure that left her blind for three weeks.

The 25-year-old revealed she spent a further $70,000 on extreme body modifications – including a tongue split, breast augmentation, cheek and lip fillers, pointed implants placed in her ears and a Brazilian butt lift.

In an episode of Hooked On The Look, the self-described ‘Blue Eyed White Dragon’ said she thought she looked ‘terrible’ after she used makeup to hide her face and neck tattoos – as she described how much she ‘hated’ her old ‘boring’ appearance.

Amber Luke, from Brisbane, has nearly 600 tattoos from head to toe (pictured breaking down in tears as she described how much she ‘hated’ herself before transforming her look) 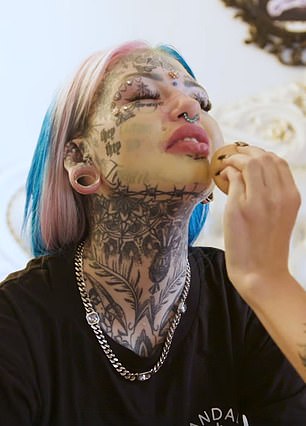 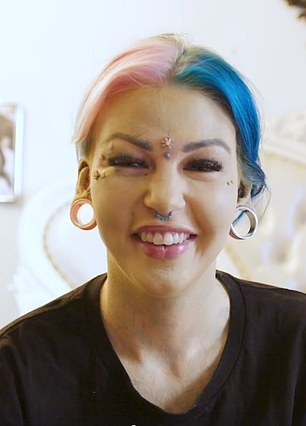 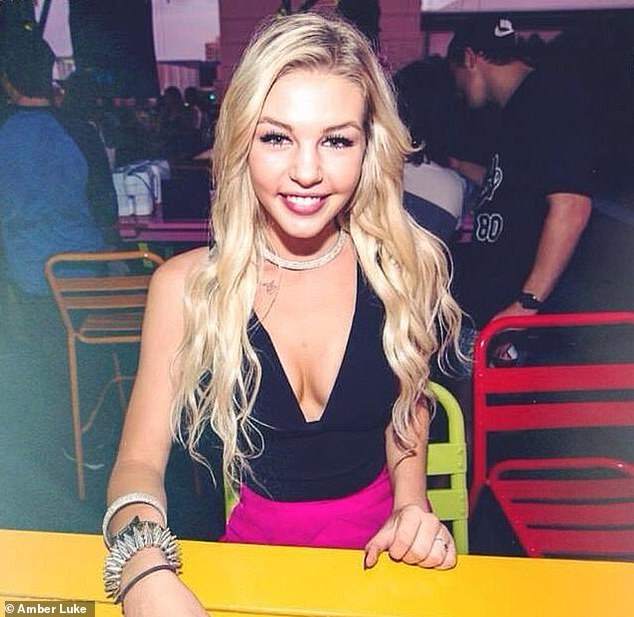 Looking at an old picture of herself, Amber said she thought she looked ‘plain’ and ‘boring’ (pictured in early 2017 before undergoing a complete transformation)

‘I know it sounds very materialistic that I want to change myself but imagine hating yourself so much, you couldn’t even look in the mirror? You couldn’t step outside your house. It was just horrific to live through,’ she said as she was brought to tears.

‘I guess these days I’m just a different person to what I used to be. Life happens and you get judged. At the end of the day, I’m a strong person and I can take it no matter what.’

At the age of 16, Amber developed a fascination for tattoos before she dabbled with extreme body modifications.

Embarking on her body transformation, she went under the knife to modify her tongue split and get ‘pointy’ ears, as well as breast implants.

Her ideal image is to be ‘fully covered’ in tattoos.

‘What’s the point of living a normal life? It’s boring,’ she said.

‘How much have I spent on tattoos? My mum likes to cry every time I say this number, about $50,000, but that’s just on tattoos.

‘So my procedures as such as my breast augmentation, eyeball procedure, tongue splitting and my Brazilian butt lift, which is about to happen in a few months, I’ve spent about $70,000 on modifying my body.’ 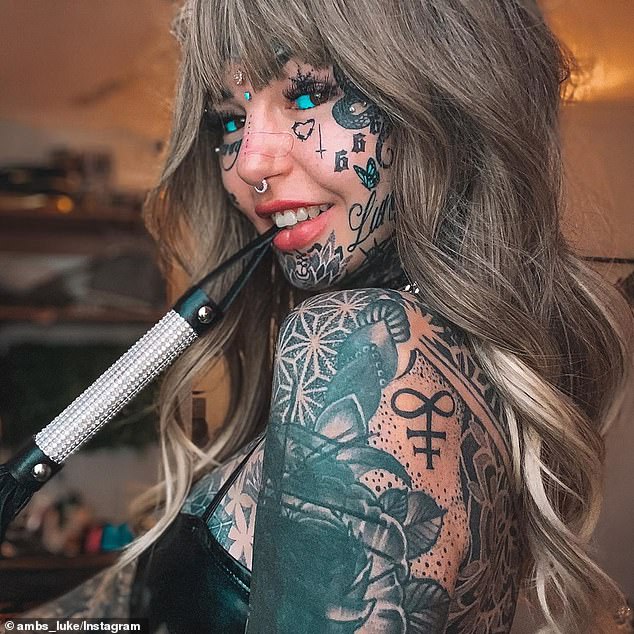 She has nearly 600 tattoos from head to toe, including blue ink injected into her eyeballs during an excruciating 40-minute procedure that left her blind for three weeks 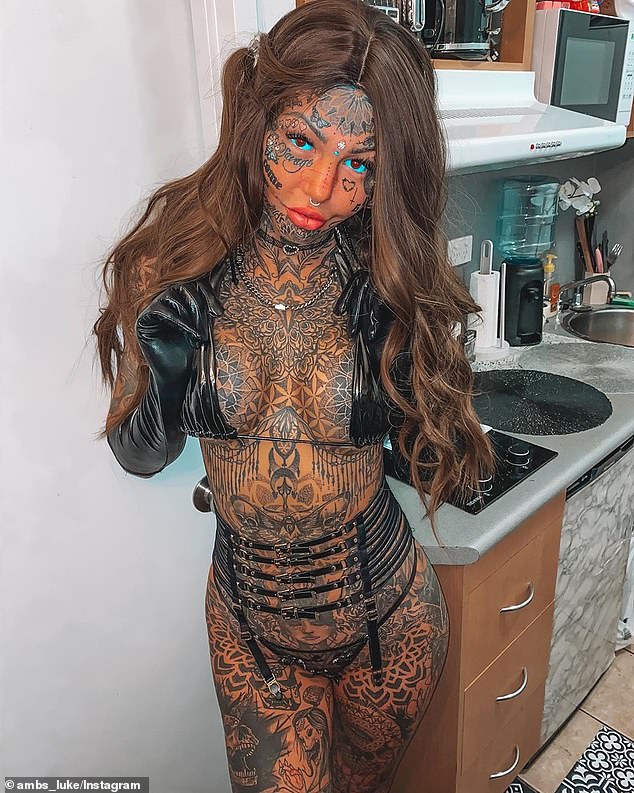 The 25-year-old woman has spent a further $70,000 on extreme body modifications 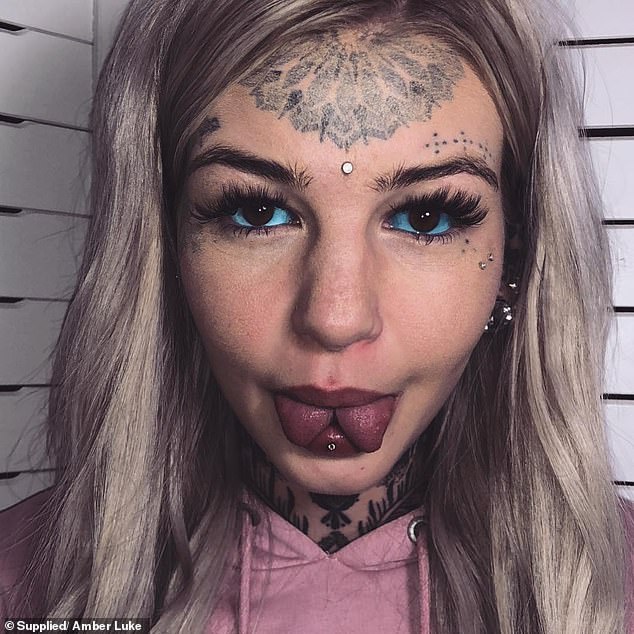 She has a mandala on her decolletage and forehead, blue tattooed eyeballs and a split tongue

Amber said she was told to gain 10 kilos for her Brazilian butt lift.

‘They’re going to take the fat from these areas and inject it all into my buttocks,’ she explained.

‘A lot of people are going to give me scrutiny for this because “why not just go to the gym?” but I’m lazy, I’m freaking lazy. I’m sorry, I’d rather pay the $15,000. If that makes me materialistic so be it.’

Last November, Amber revealed how she went blind for three weeks after undergoing the most dangerous procedure on her eyeballs.

‘I can’t even begin to describe to you what the feeling was like, the best thing I can give you is once the eyeball was penetrated with the ink, it felt like [the tattoo artist] grabbed 10 shards of glass and rubbed it in my eye,’ Amber told Barcroft TV.

She previously admitted she doesn’t want to get extreme body modifications again.

‘I don’t plan on getting any more body modifications that are extreme in that manner. So no more tongue splitting, no more eyeball tattooing,’ she said. 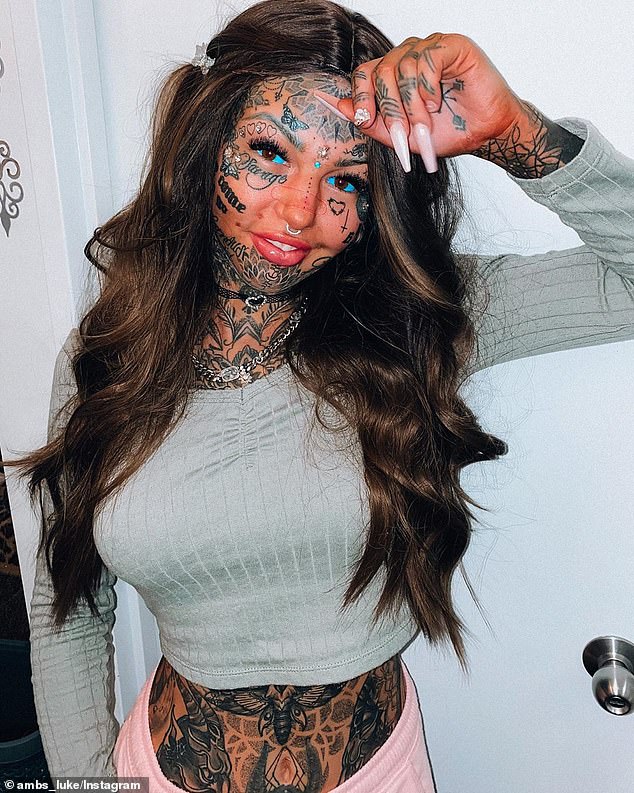 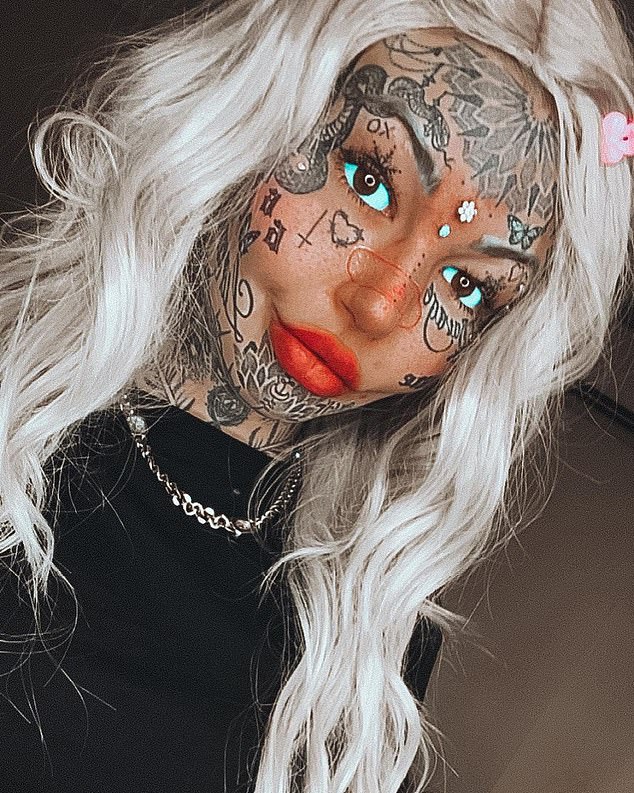 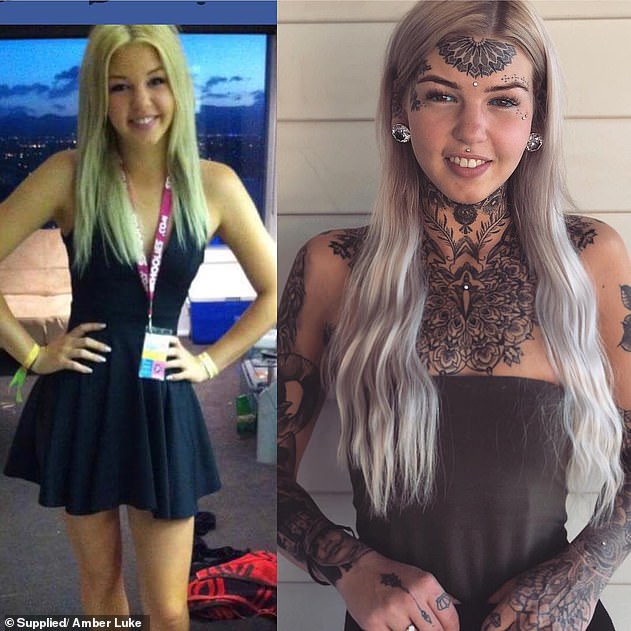 Before and after: Before her transformation, Amber said she never liked the way she looked

Before her transformation, Amber said she never liked the way she looked.

‘I see myself as very plain looking when looking at before and after photos, I absolutely hated the way I used to look. It wasn’t me. I was boring,’ she previously told Daily Mail Australia.

‘But I’ve evolved myself over the years into what I want to be and look like, but in saying that, I still have a long way to go.’

Amber said she has ‘no regrets’ over her 10-year transformation.

‘I’m not worried what I’m going to look like when I’m older, I understand that everyone ages and I don’t think anyone will be looking too “pretty” at 70 years old,’ she said.

‘At the end of the day, it’s the only thing I can take to my grave with me.’

Since unveiling her new look, Amber said she has been met with mixed responses.

‘I gained a lot of support and positive vibes from complete strangers – there was always the few nasty opinionated ones who try to make you feel inadequate, but I never let them get to me,’ she explained.

‘I’m not harming anyone in the process, I’m doing what I want to do and if it makes me get up in the morning and be a happy person, then so be it.’