There were reports that she had broken up with rapper boyfriend 21 Savage.

And Amber Rose not only confirmed the news but admitted that she misses him so much that she smells his old underwear.

The 34-year-old model appeared on the Big Boy’s Neighborhood radio program to talk about the end of her relationship with the 25-year-old rapper.

She admitted she still thinks about her ex-boyfriend all of the time and hopes they can reconcile their differences.

Split! Amber Rose and 21 Savage have split after almost a year together; (pictured February)

Amber – who has a five-year-old son called Sebastian with ex-husband Wiz Khalifa – explained: ‘To be in a relationship is difficult, to be famous and in a relationship is even more difficult and then you end up arguing about things that you usually wouldn’t argue about as a normal person.

Amber even admitted that she misses the rapper – whose real name is Shayaa Abraham-Joseph – so much, she’s taken to sniffing his underwear.

Amber confessed: ‘I still sniff em [his old underwear], I was just sniffing ’em before I got here. I miss that motherf*****.

‘If you don’t love the smell of your man’s private area, then you don’t really love him.’

Despite their recent split, Amber still doesn’t consider herself to be single. 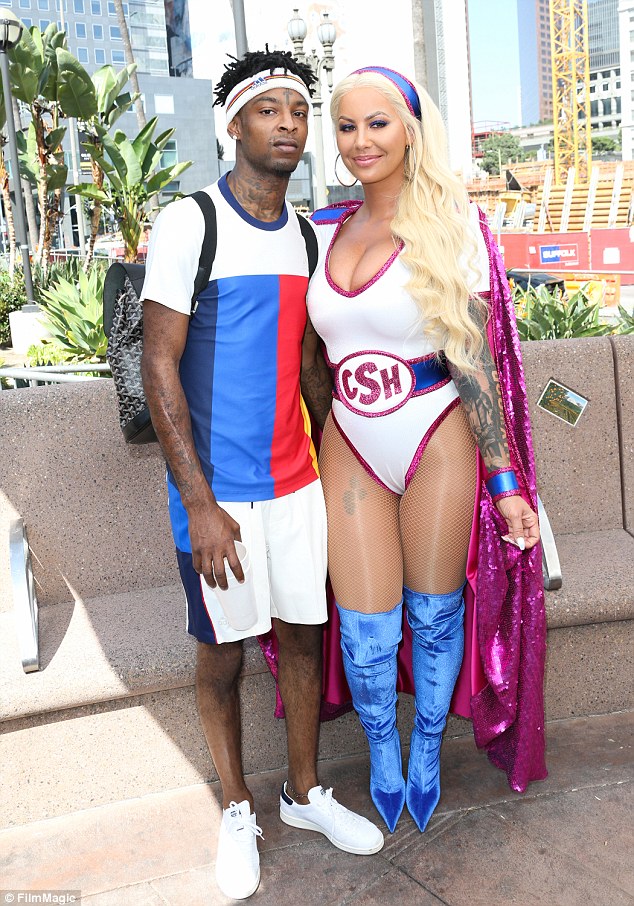 Better days: ‘They are definitely off. They are not together,’ a source told People on Wednesday; (pictured October)

The curvaceous star – who previously dated rapper Kanye West – confessed that the emotions of their break-up are still very raw and that she is still deeply in love with the musician.

She explained: ‘We’re just having a rough patch, it’s just very fresh. I could never say that I’m single because I don’t feel single, I still love him.

This comes just a month after a People report that they had split in which a source said:  ‘They are definitely off. They are not together.

The TV personality and rapper were last seen together holding hands in Los Angeles on Valentine’s Day.

The pair – who unfollowed each other’s Instagram accounts earlier this week – had announced their relationship last July as Amber posted a tribute to 21 Savage. 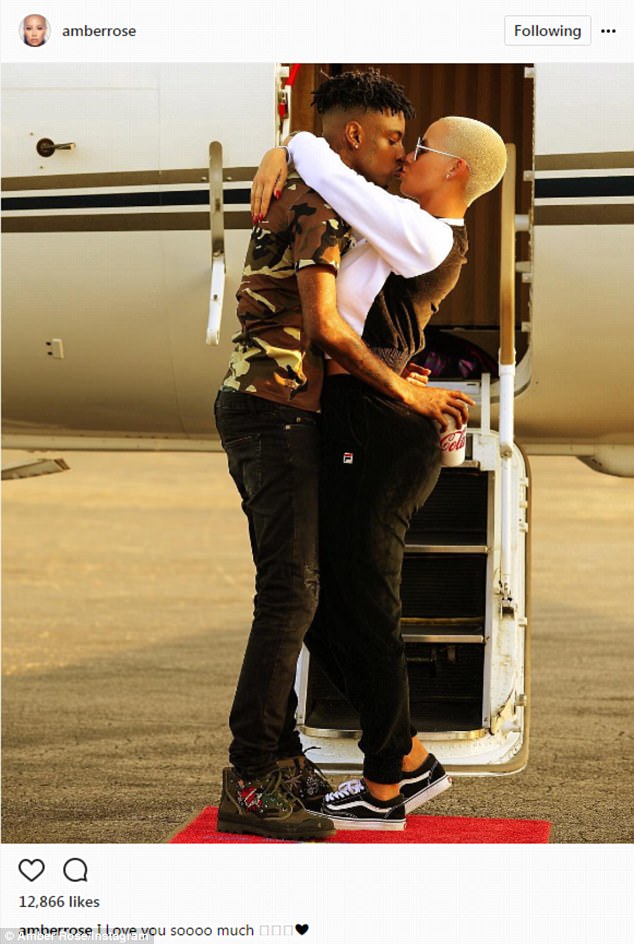 Old love: The pair – who unfollowed each other’s Instagram accounts earlier this week – had announced their relationship last July as Amber posted a tribute to 21 Savage

‘It’s pretty amazing waking up every morning feeling love like this,’ she captioned a photo of the two in bed.

‘I’ve cried endlessly and been hurt a lot in my life, I’ve been abused, talked to like I wasn’t sh*t, been gaslighted and Slut shamed by men that I once loved and cared about.

‘So I’m so thankful that God brought this amazing person in my life who genuinely has my back and is ready to ‘pull up’ to defend my honor by any means.’ she added.

‘Let’s talk about how much in love I am and how happy I am,’ Amber said when she was first approached by the reporter, later gushing how both she and her boyfriend had a lot in common.

The curvy video star and TV host married rapper Wiz Khalifa, 29, on July 8, 2013 and they separated in September the following year. 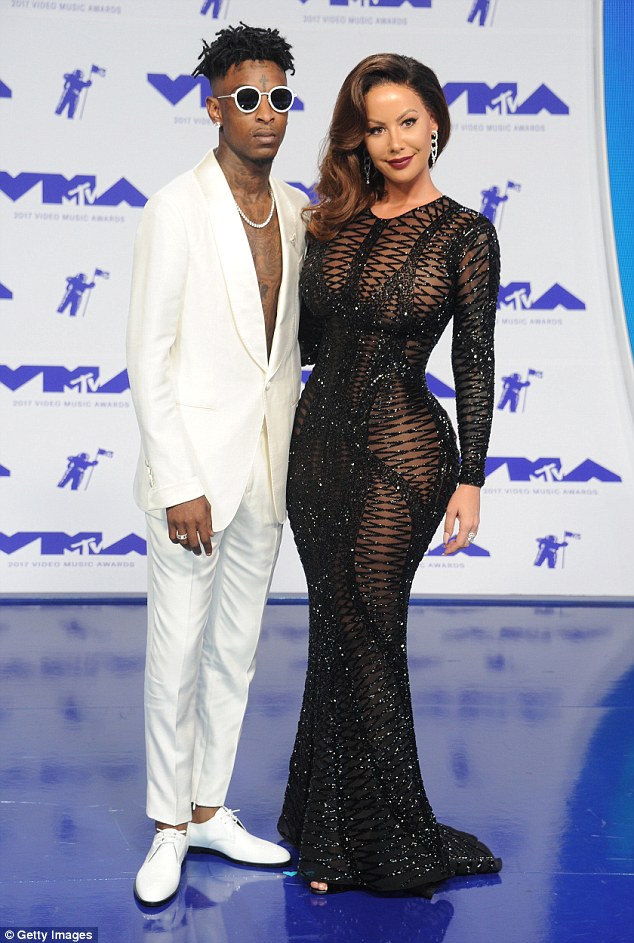 Plans foiled: In August, she told TMZ : ‘I want to marry him. But we’ll see.’; (pictured August)

In 2016 they agreed to share custody of their only child after a nasty court battle.

Amber also claimed she was left heartbroken after she and Kanye West split up and that he has ‘bullied’ her for the past seven years.

She dated the rapper for two years before splitting in 2010. 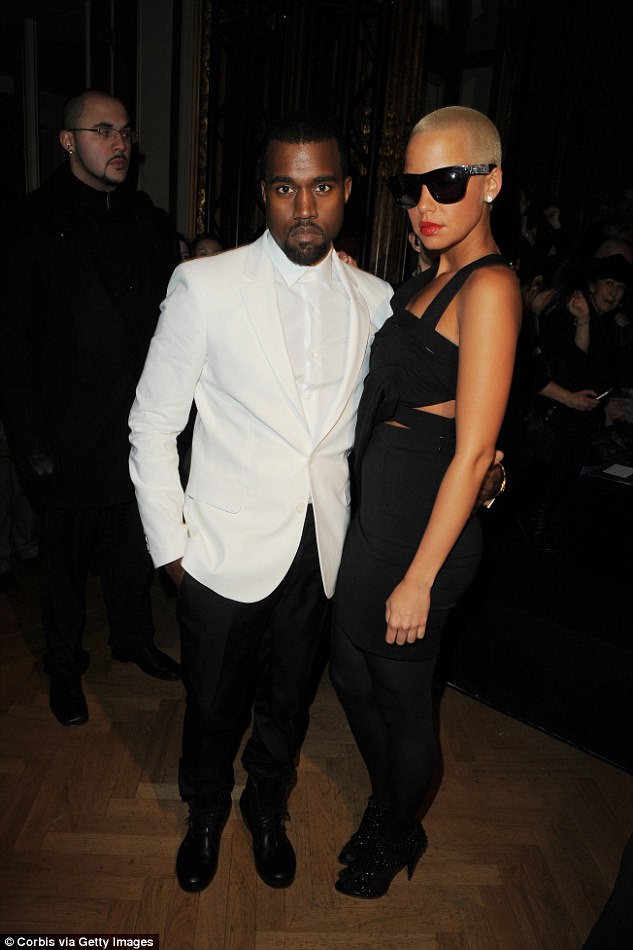 When they liked each other: Kanye West and Rose in 2010; he moved on to Kim Kardashian in the spring of 2012