The cost of living crisis and rising interest rates have failed to dent home sellers’ ambitions, with property asking prices hitting a new high for the fifth month in a row.

The average price of property newly listed on the market rose by 0.3 per cent, or just over £1,100, between May and June to hit a record high of £368,614, the latest price index by Rightmove shows.

But this represented a sharp slowdown from May’s 2.1 per cent monthly rise and it’s the smallest increase since January. Meanwhile, Rightmove said that the annual pace of growth has slowed and is likely to halve by year end.

Asking price inflation eased slightly to 9.7 per cent, in the year to mid-June, from 10.2 per cent a month earlier and is expected to halve to around 5 per cent by the end of 2022.

Rightmove said it expected some monthly price falls for the rest of the year as buyer demand will likely be impacted by stretched affordability and rising mortgage rates.

Rightmove’s director of property science, Tim Bannister, said: ‘The exceptional pace of the market is easing a little, as demand gradually softens and price rises begin to slow, which is very much to be expected given the many record-breaking numbers over the past two years.’

Estate agents continue to report higher-than-usual demand for homes, with buyer demand for each available property more than double the pre-pandemic, five-year average for the month of May.

However, some have started to see a slight cooling in the market in recent weeks, with buyer demand down by 8 per cent in May compared to April.

‘We’re hearing from agents that though they might have had slightly fewer enquirers for each property in recent months, they’re still seeing significant interest from multiple buyers and are achieving successful sales,’ Bannister said. 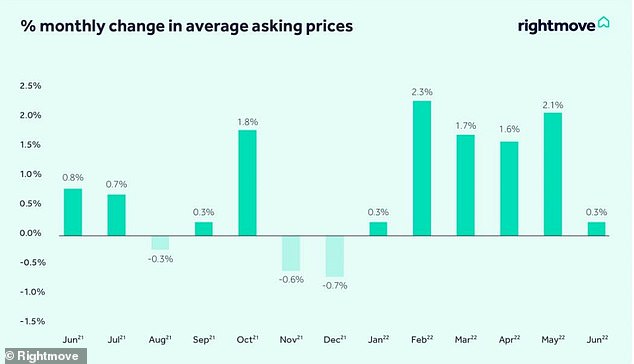 The report echoes findings by the Royal Institution of Chartered Surveyors (RICS), which last week reported that new enquiries from prospective buyers fell in May for the first time in eight months, with some estate agents citing the surging cost of living and rising interest rates.

Consumer price inflation hit 9 per cent in April and is expected to soar to 11 per cent this autumn when the cap on energy bills is next lifted, according to the latest predictions by the Bank of England.

The central bank last week hiked interest rates by 0.25 percentage points to 1.25 per cent, its fifth hike in six months, taking the base rate to the highest level since February 2009.

Most homeowners who have fixed rate mortgage deals won’t be affected immediately, but are likely to find remortgaging in future more expensive, depending on property price growth.

But those with variable rate mortgages are likely to see monthly costs rise imminently. 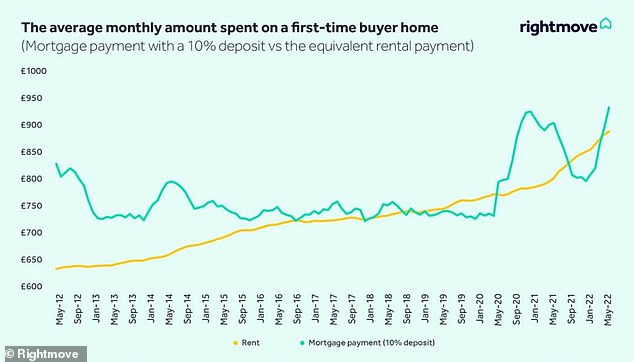 On the up: Monthly mortgage bills for first-time buyers have gone up since the start of the year 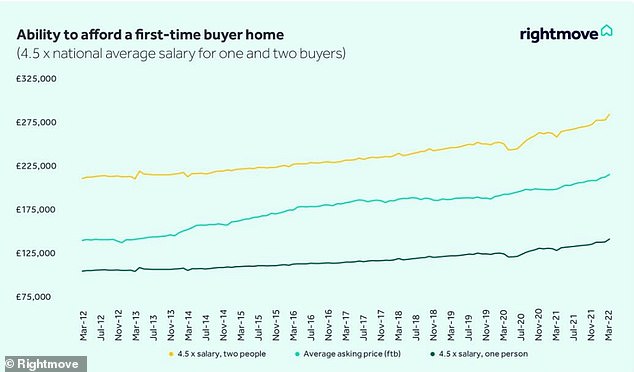 Stretched affordability: The average asking price of a typical first-time buyer home has gone up in price by 0.5% this month, and is 9.1% higher than last year at £224,251

Bannister added: ‘After a very strong first half of the year, it is likely that affordability constraints will have a greater influence on market behaviour in the months ahead, with further interest rate rises anticipated.’

The average asking price of a typical first-time buyer home has gone up in price by 0.5 per cent this month, and is 9.1 per cent higher than last year at £224,251.

On the other hand, the asking prices at the top end of the market have fallen slightly, but remain 10 per cent higher than a year ago.

London, the north west and the north east were the only regions to have seen average asking prices fall between May and June, while Wales and Scotland saw prices rise by more than 2 per cent.

Oliver Gill, director at Kirkham Property in Oldham, said that while many properties were still selling above asking prices, within the last month to six weeks they have noticed a slight slowdown.

‘This could be due to more properties coming to market which we are starting to see and the current imbalance between high buyer numbers and low stock has corrected itself ever so slightly,’ he said.

‘Another reason for this could be market sentiment shifting somewhat based on the rising costs of living.

‘It is too early to know if interest rate rises have had any impact within the market, although we are having conversations with buyers wanting to purchase now and fix their rate before further expected increases happen.’