Ambulances called to home more than 3,500 times in a year

Yet only around one in every 100 calls resulted in someone being taken to hospital, as a patient was taken from the property just 37 times.

This was the worst example of frequent callers which cost the overstretched NHS nearly £20 million a year.

The 10 most prolific callers in the UK used the emergency services more than 10,000 times between November 2016 and October 2017, revealed Freedom of Information data obtained by The Sun.

The three worst offenders totalled call outs of more than 1,000 times during this period.

Paramedics were called from an address in Barnet, North London, 3,594 times (stock image)

The alarming finding comes as the health service is facing its worst winter crisis since the 1990s – with at least 16 hospital trusts declaring a ‘black alert’ status and hospital scenes described as ‘battlefields’.

A poll of more than 100 NHS trusts with an A&E revealed 16 of the 58 that responded had been put on the highest level of alert due to ‘sustained pressure’, reports The Sun.

Officials warn that abuse of the emergency services risks the lives of patients in genuine need of an ambulance.

This means the Barnet home cost the health service around £150,000 in a year – and that’s even before the cost of hospital treatment is taken into account.

However, Jason Scott, a research associate at Newcastle University’s Institute of Health and Society, has studied the issue and says it’s a misconception is that these malicious or hoax calls.

He believes frequent callers are often people with complex issues – such as mental health or social isolation – who dial 999 as a ‘last resort’.

On Tuesday, hospitals were told to cancel up to 55,000 non-urgent operations to free beds and frontline staff amid a rise in flu cases.

After 16 hospital trusts said they were on the highest alert, doctors say the conditions in A&E are the worst they have seen and patients are being treated in corridors due to a bed shortage.

The pressures are likely to intensify later this week, with the return of freezing temperatures predicted across the UK.

Families are being asked to look after elderly patients at home to free up hospital beds.

MAY DENIES THE NHS IS IN CRISIS

Prime Minister Theresa May has denied the NHS is in a crisis – despite the controversial decision by the health service to postpone 55,000 operations.

Her comments followed an apology for the patients affected by Health Secretary Jeremy Hunt, following pressure from critics for him to speak out about the move.

The unprecedented step was made in the grip of a winter ‘crisis’, which has also been denied by an NHS chief – despite the ‘extremely difficult circumstances’ placed on A&E units across the country. 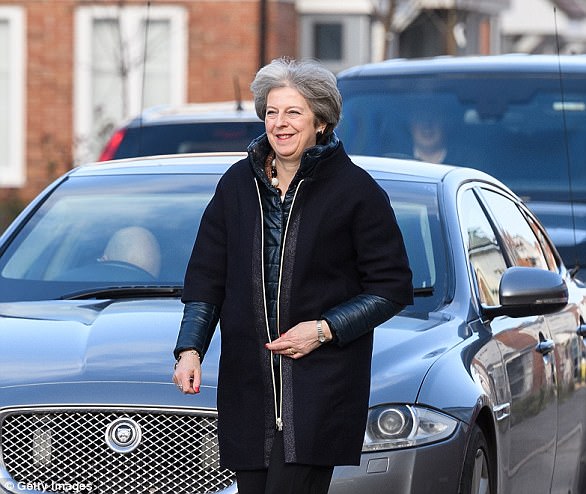 Prime Minister Theresa May has denied the NHS is in a crisis – despite the controversial decision by the health service to postpone 55,000 operations (pictured walking around a new housing development in Wokingham yesterday morning)

While the struggle ensues, A&E staff have taken to social media to condemn the situation, revealing they are ‘ashamed’ over the ‘substandard care’ the NHS is offering. Others branded the crisis as ‘battlefield medicine’.

Mrs May rejected claims that the NHS is in ‘crisis’ saying the health service is better prepared ‘than ever before’ during a visit to Wokingham yesterday.

She said: ‘Can I say a huge thank you to NHS staff for their hard work, they work hard and do a fantastic job for us day in and day out all year round, but obviously there are extra pressures in winter.

‘They’re doing a fantastic job and their dedication is ensuring that people are getting treatment that they need.

‘The NHS has been better prepared for this winter than ever before, we have put extra funding in.

‘There are more beds available across the system, we’ve reduced the number of delayed discharges of elderly people who would otherwise have been in NHS beds rather than in social care.

‘But I recognise for those people that have had their operations postponed this is disappointing, it’s frustrating.

‘We will ensure that those operations are put back as soon as possible and once again I say that NHS staff are doing a fantastic job.’