As January unfolded Covid cases were climbing off the charts, and we were running out of oxygen, equipment and resources, writes Ameera Sheikh

Nearly a year on, I can still see the face of the 16-year-old girl who approached me in A&E at 6.30am last April.

Her cheeks streaked with tears, she asked for directions to the morgue so that she could see her father’s body.

Up at dawn, on her own, her desperation to see her dad’s face one last time was palpable, but as gently as I could, I had to explain it wasn’t possible. Covid-19 meant his coffin lid would have had to be sealed already.

As this distraught teenager wailed with an almost unbearable grief I think that’s when it really hit me: that death was all around me.

We were just a couple of weeks into the first national lockdown by then, and the impact of coronavirus was already abundantly clear.

I’m glad I had no idea of what was to come: I would lose friends and colleagues to the virus, zip countless previously healthy people into body bags, see the NHS pushed to breaking point and be gripped by nightmares that wake me to this day, screaming in panic.

I’ve worked for the NHS since I was 17, starting out as a healthcare assistant, then completing a degree to become a nurse, assigned for a number of years to A&E in an assortment of London hospitals.

During that time, I saw it all, or I thought I did. The doors of A&E are always busy and even pre-Covid there were never enough nursing hands to go round or enough beds, and it wasn’t unusual to see a line of paramedics snaking down the corridor with their patients on trolleys waiting to be seen.

Somehow, we always managed — just. Yet none of us had any idea what lay ahead, even when last January we started to see the first few patients coming into A&E with coughs and shortness of breath that we would later know to be symptoms of Covid.

We knew this was an infectious disease, but we didn’t quite know what it was. Even before the first lockdown, we were seeing ever increasing numbers of Covid cases. 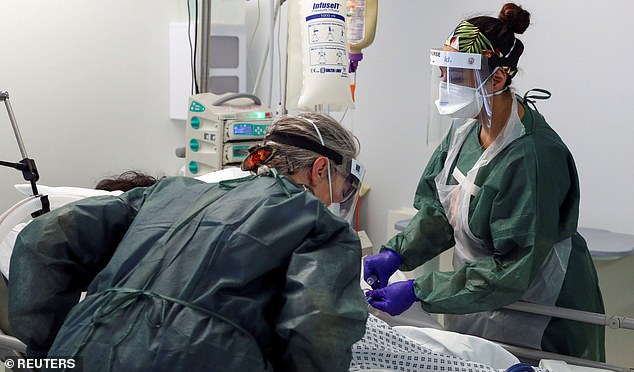 Months down the line, it’s easy to forget how vulnerable hospital staff were, too, because it took many weeks for us all to be given the right PPE. NHS staff in one hospital are seen above caring for a coronavirus patient

From early on, the resuscitation area was constantly full and a bed would only become free when someone died. That sometimes happened in front of me.

There were many other challenges: in those early days, families struggled to understand that once their loved ones had been diagnosed with Covid they had to go home and leave them no matter how ill they were, and time and again we had difficult conversations with friends and relatives who were frightened, distressed, and angry.

I remember one young woman pleading with me to let her be with her mum, and a husband shouting at me because he wanted to hold his wife’s hand. It took a while for people to understand this was very infectious, and while I understood their bewilderment, to have people shouting at you when you were working 12-hour shifts to save their loved ones’ lives was hard.

It’s not as if I was unaccustomed to working in difficult places. I’ve volunteered in refugee camps and seen almost unimaginable horror. It’s something I never thought I would see in a British hospital.

Months down the line, it’s easy to forget how vulnerable hospital staff were, too, because it took many weeks for us all to be given the right PPE.

Once someone was a confirmed case, any staff were automatically given PPE equipment, but until that point it was a lottery. 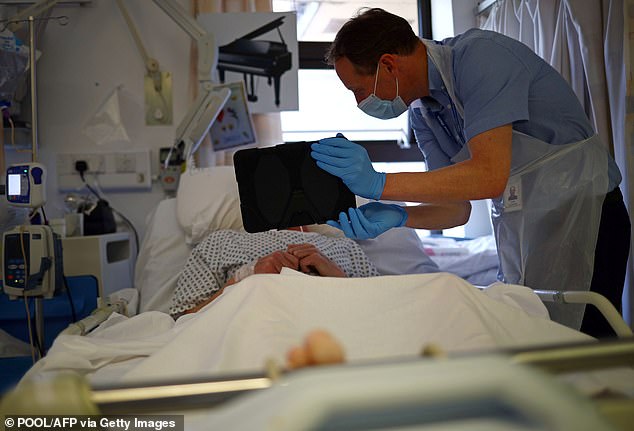 We knew this was an infectious disease, but we didn’t quite know what it was. Even before the first lockdown, we were seeing ever increasing numbers of Covid cases. A Covid-19 patient in one hospital is seen speaking to loved ones on Zoom

I frequently worked in A&E, screening walk-in patients, and while we were all meant to be ‘fit tested’ for ‘FFP3’ masks — a sealed mask from the bridge of your nose down to the side of your lips and top of your chin that moulds to your face — for two months, I had nothing more than a single-use surgical mask and no screen between me and people I had to greet.

When you live alone, as I do, it was scary. We knew people were dying in their own homes, and I had seen enough fit and young people lose their lives to know that I could not assume that just because I was young and healthy I would be given a free pass.

I have a constant knot of worry in my stomach, although having my first shot of the vaccine in January has made me feel slightly safer.

As summer approached and lockdown eased the cases dropped, although the hospital was still busy, and as the world started to open up I could see the problems being stored up for the future. We all knew there was going to be a second wave.

By September, I had moved from emergency to intensive care, which was dealing with the backlog of major surgery. It was hectic, as new Covid patients were still arriving and we had some long-standing ones who hadn’t made it off a ventilator.

It took until the end of the year for the second wave to really hit. I spent New Year’s Eve doing the night shift, working alongside critically ill Covid patients then arrived home to see a video, sent by a friend, showing a crowd shouting that Covid was a hoax. I could barely believe my eyes.

Things went downhill from there. As January unfolded Covid cases were climbing off the charts, and we were running out of oxygen, equipment and resources.

In ICU the nurse-to-patient ratio is meant to be one on one, but most nurses were looking after anything up to six patients at a time and one friend was looking after nine.

Many Covid patients go into kidney failure, meaning you are not just looking after a ventilator but a dialysis machine in a situation where missing minutes can cost lives.

Some days it was so intense I was on my feet for 14 hours at a time, and with only 30 minutes to eat, and drink a glass of water.

When I wasn’t looking after the sick, I was trying to comfort their families, conversations that had to take place over soulless video calls. Everyone was exhausted and overwhelmed.

One day, at the start of my nightshift, another nurse came in to the lift and as we stood at opposite ends I could hear her crying. All I could do was just put my hand on her shoulder and tell her everything would be OK, although those words ring hollow when, like me, you go home dog-tired only to wake after two hours in your bed with nightmares and flashbacks.

It’s hard, too, to come away from a shift where a young, healthy person has lost their life to Covid to see people going about their business as if this second lockdown no longer exists. When you see crowds outside coffee shops and picnicking in parks, it’s impossible not to feel upset and disheartened.

These are emotions I have felt in spades since learning that I was to be offered a pay rise of 1 per cent, an extra £3.50 a week in my pay packet — the equivalent of a meal deal in a local supermarket.

I’m not too proud to say I was frustrated to the point of tears. No nurse is doing this job for the money, but we have all done so much in the past year to save this country from this deadly virus.

We’ve treated everyone from the poorest to the Prime Minister and every one of us has made huge sacrifices. Reports that the figure may be closer to 1.7 per cent for some nurses didn’t make me feel any better. There are already healthcare workers who work a second part-time job to make ends meet. This will make them leave altogether.

To say there isn’t enough money is laughable — £500 million went on Eat Out to Help Out and over £100 billion into corporate bailouts.

Nine hundred health workers have died, and many hundreds more have been seriously ill.

Others have moved away from their families to be closer to the hospital, while most of us had rotas that were so horrendous we had no energy left.

I know many in the profession who have fallen back on unhealthy coping mechanisms — comfort eating and forgoing exercise.

And this isn’t over. Covid is still with us and the pressure on intensive care remains high. People are still dying, leaving grief-stricken loved ones in their wake. Nearly a year on, I still think about that 16-year-old girl every day.

Ameera did not receive any payment for this article

How music can affect your health. This week: Slow music makes you feel full faster

Taking longer to eat a meal can help you feel fuller sooner, potentially helping you eat less — and if you want to eat more slowly, you should play slow music, according to a study by Aarhus University in Denmark.

The study, published in the journal Appetite, found listening to slow music meant people took four seconds longer to eat the same amount of chocolate than when listening to fast music.