Officials from the American Academy of Pediatrics (AAP) said that schools should reopen with students present in the fall.

In recently released guidance, the AAP listed several re-entry policies for school administrators to follow as they prepare for the fall semester amid the coronavirus pandemic.

The organization also noted that schools should consider reopening with students present inside their classrooms.

‘The AAP strongly advocates that all policy considerations for the coming school year should start with a goal of having students physically present in school,’ the guidance reads.

Officials from the American Academy of Pediatrics (AAP) said that schools (April 16, 2020, image of a closed school in Montana) should reopen with students present in the fall

‘The importance of in-person learning is well-documented, and there is already evidence of the negative impacts on children because of school closures in the spring of 2020.’

According to the AAP, ‘lengthy time away from school and associated interruption of supportive services often results in social isolation, making it difficult for schools to identify and address important learning deficits as well as child and adolescent physical or sexual abuse, substance use, depression, and suicidal ideation’.

‘This, in turn, places children and adolescents at considerable risk of morbidity and, in some cases, mortality.

‘Beyond the educational impact and social impact of school closures, there has been substantial impact on food security and physical activity for children and families,’ the AAP continued.

In late May, President Donald Trump called for US schools to be reopened as soon as possible.

The president’s remarks at the time followed a Fox News segment which claimed that students don’t spread the coronavirus. 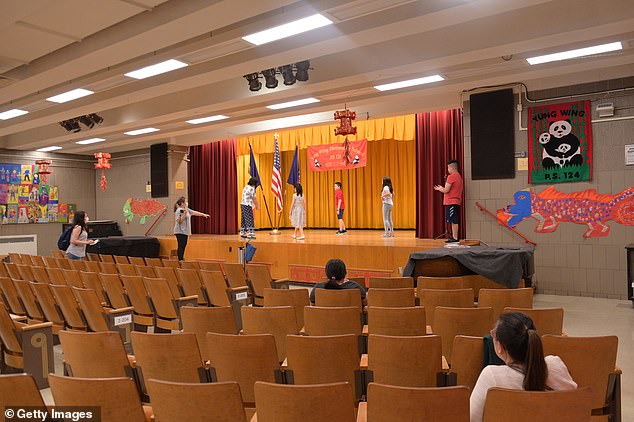 ‘The AAP strongly advocates that all policy considerations for the coming school year should start with a goal of having students physically present in school,’ the guidance reads. Teachers prepare students for their 5th grade graduation in New York City on June 16

‘Schools in our country should be opened ASAP,’ Trump tweeted on May 24.

In the AAP’s release, the organization acknowledged that children rarely suffer severe symptoms of the coronavirus.

According to the AAP, evidence indicates that ‘children and adolescents are less likely to be symptomatic and less likely to have severe disease’ resulting from COVID-19.

‘In addition, children may be less likely to become infected and to spread infection.’

The group also wrote that ‘policies to mitigate the spread of COVID-19 within schools must be balanced with the known harms to children, adolescents, families, and the community by keeping children at home’.

The guidance comes during a time when several states have seen an uptick in coronavirus cases as the number of cases in the US soars over 2.5 million.

On Friday, the US recorded more than 45,000 new cases of COVID-19, the largest single-day increase of the pandemic, according to a Reuters tally.

Texas, Florida and other southern states are having to reverse their reopening process as the cases continue to climb.

In a reversal of his early moves to relax restrictions, Texas Governor Greg Abbott on Friday ordered bars across the state to close and required restaurants to limit indoor seating capacity to 50 per cent.

Florida, another state that reopened its economy quickly, told bar owners in the state to immediately stop serving alcohol on their premises.

Florida issued its new rules after recording 8,942 new cases on Friday, eclipsing the state’s one-day record of 5,511 reached on June 24.