PICTURED: American Airlines passenger who now wants to press ASSAULT charges against the man she filmed punching her reclined seat

The American Airlines passenger who filmed a man pummeling the back of her reclined seat in a viral video has spoken out to reveal she was threatened with arrest for filming the man.

Wendi Williams was almost thrown off the flight from New Orleans to Charlotte on January 31 when the man began ‘punching’ the back of her chair.

She told TMZ on Friday that the worst of the ‘assault’ happened before she started filming it on her cell phone, and that she now wants to identify the man in order to press charges against him.

She also wants the air stewardess, Loretta, who intervened to be fire because she claims she escalated the situation by threatening to arrest her rather than tell the man to stop hitting her ‘like a child’.

‘I want to know who he is, I would like to press charges against this man. I was assaulted on this plane.

‘And I would like the flight attendant Loretta fired,’ she said.

Williams, a mother-of-one from Pittsburgh, Pennsylvania, said that the worst of the ‘punching’ happened before she started filming.

‘Everyone thinks that when i say he was punching me that’s what was in the video. He was punching my seat, hard, I thought videoing him would stop him.

‘The video is an irritation but what he was doing before that was assault. It happened once and I thought maybe – who knows – freak accident.

‘At which point it happened very 20 to 30 seconds. It probably happened eight times and that’s when I started videoing,’ she said.

After asking the man what his problem was, she stuck her hand up to attract the air hostess’s attention. 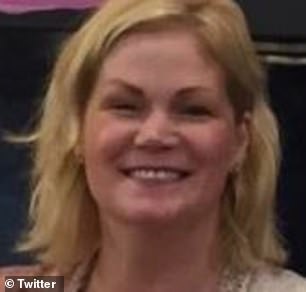 Williams says she was however horrified when the woman not only sided with the man, saying: ‘oh it is cramped back here’, but threatened to arrest her if she did not delete the video.

‘She came over huffy and she came over and I said, “he’s hitting me repeatedly like a child” and she was like, “oh it is tight back here.”‘

Williams said she did not want to report the incident to the FBI – which handles air incidents – but that she wants American Airlines to resolve it.

That is why she posted the video to Twitter, she said.

The footage has divided travelers since she shared it earlier this week.

Delta CEO Ed Bastian chimed in on the debate on plane etiquette on Friday when he told CNBC that passengers’ should ask permission from the person sitting behind them to put their seat back – and that he never reclines.

‘We can all agree it is irritating when the passenger in front reclines but it is within their rights to do so.

‘The only time it is wrong is when the meal service is still happening and yet to be cleared.’