An American traveller has listed the things he ‘hates’ about Australia – including the ‘aggressive’ flies, glaring sun, slow WiFi, and bicycle helmet laws.

Backpacker Tristan Kuhn has been travelling around Melbourne, Tasmania, Adelaide and Cairns after moving from Texas in October last year.

In his latest YouTube video, the 22-year-old has shared some of the culture shocks he discovered since living around Australia.

‘I’m going over the things this American hates about Australia. You know “hate” is a little bit of a strong word but I would say these are things that I dislike, frustrate or annoy me about Australia,’ Tristan said.

‘I don’t hate Australia for these things, like I freaking love Australia, why do you think I’m here? But these are just some ways that I think Australia can improve.’

Tristan Kuhn has been travelling around Melbourne, Tasmania, Adelaide and Cairns after moving from Texas in October last year (pictured at the Millaa Millaa Waterfall in Queensland)

Tristan said one of the things he doesn’t like about Australia is the harsh sun.

Australia receives higher UV radiation levels than the US because it’s located close to the ozone hole over the Antarctic so the Earth’s orbit brings the country closer to the sun over summer.

‘Even though the sun in Australia is the same sun you see in America, the sun here is different,’ he explained.

‘There is actually a hole in the ozone layer of the atmosphere above Australia so the sun here is much more strong and it burns you way more quickly than it will anywhere in the States.

‘I don’t burn easily but if I go into the sun here for 30 minutes to an hour like I’m gonna be pink. The extra strong stinging sun is the first thing that I do not like about Australia.’

PAYING FOR GAS AT A COUNTER

Tristan said another thing he noticed was having to pay for fuel at a counter inside a petrol station instead of paying at the pump like the US.

‘Now this is a minor inconvenience but you cannot pay for gas at the pump, you actually have to walk inside the gas station to pay for gas,’ Tristan said.

‘This is annoying for two reasons – one I don’t want to go all the way into the gas station to pay, it just takes extra time.

‘Two – there’s often a line of other people who are paying for gas or just buying stuff from the gas station so you have to wait in line to pay for gas. I don’t understand why you just can’t pay at the pump like you do in America.’

Tristan said he heard there are pay options at the pump around Australia but he has ‘never seen one’ since living here.

‘If they do have them then they’re just really rare,’ he added. 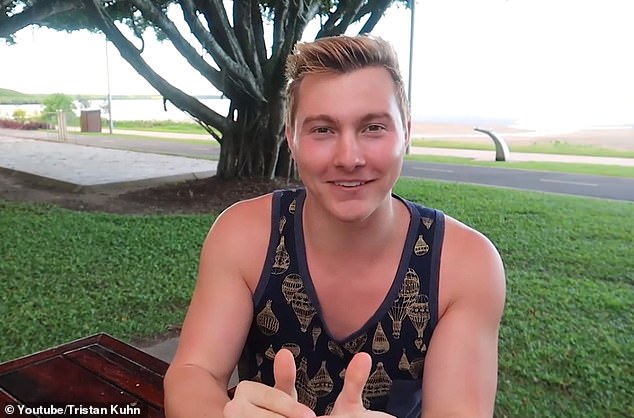 In his YouTube video, the 22-year-old has shared some culture shocks he discovered since living around Australia – including the ‘aggressive’ flies, sun, slow WiFi, and bicycle helmet laws

TURNING AT A RED LIGHT

‘Oh this really frustrates me sometimes and that is you cannot turn on red here,’ Tristan said.

‘In America you can turn right at a stop light. Australians drive on the left side of the road here so it’d be like turning left here but you’re not allowed to turn on red.

‘Nothing is more frustrating than being stuck at a red light, knowing that you are perfectly safe to turn left, there are no cars but you’re not able to do it.’

In Australia, red light means stop, wait behind the stop line. However, drivers can turn left on red light at intersections where the sign: ‘Left turn on red permitted after stopping’ has been placed.

‘This is something that doesn’t bother me one bit because I don’t drink sodas but it would really p*** a lot of Americans off and that is there are no free refills,’ he said.

‘A soft drink would cost $4.50 which is about US$3. Once you put ice in, it’s so small like probably less than half a can of soda that actually goes in.

‘There are kids who would get two or three soft drinks over their meal and just right there that would be the same amount as their meal.

‘So all you Americans out there who like your refills, be thankful that you’re in America because there’s pretty much nowhere else in the world that does free refills like we do.’ 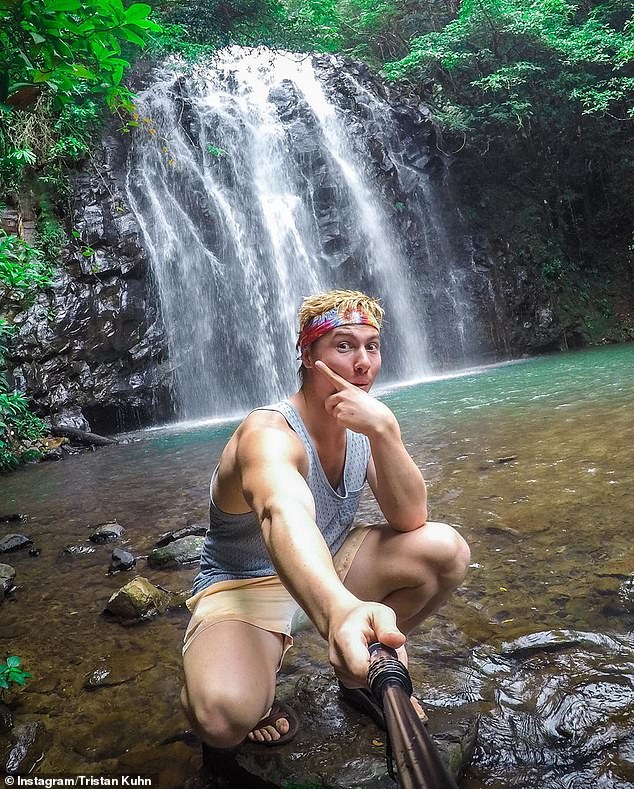 Tristan said speed cameras are one of the things he ‘really hates’ about Australia.

‘But the speed cameras here aren’t like the police in the US – they’re not gonna get you for going four miles over the speed limit. Once you’re getting close to 10, that’s when you get a ticket.

‘Here if you’re going three kilometres over the speed limit, which is equal to about two miles per hour, you’re gonna get a ticket.

‘i just don’t think that’s reasonable to me, it seems like a little bit of an overstep from the government to just mailing tickets because they’ve got you on camera.’

Tristan said he didn’t ‘like the feeling of being surveyed everywhere’ he drives.

‘Having cameras all around me is just one thing that I don’t really agree with here. To me that just seems a little too strict,’ he said.

Despite Australia inventing WiFi, the country has notoriously been known for its woeful internet speed in previous years.

And this is something Tristan said he finds ‘really frustrating’.

‘The next thing I don’t like about Australia is the WiFi here. It’s not complete c*** but it’s definitely much worse on average than it is in the US,’ he explained.

‘If you go to a typical free WiFi cafe or restaurant, the WiFi is gonna be lower quality than what you’d find in the US.

‘But even if you are paying for your own internet and you’re paying for the fastest WiFi that you can get, you’re still gonna have really slow upload speed.

‘As someone who uploads YouTube videos, it usually takes a 10 minute YouTube video around 20 to 30 minutes for it to upload in the US.’

In Australia, Tristan said when he tried to upload a 10-minute YouTube video, it took him ‘between five-and-a-half to seven hours to upload’. 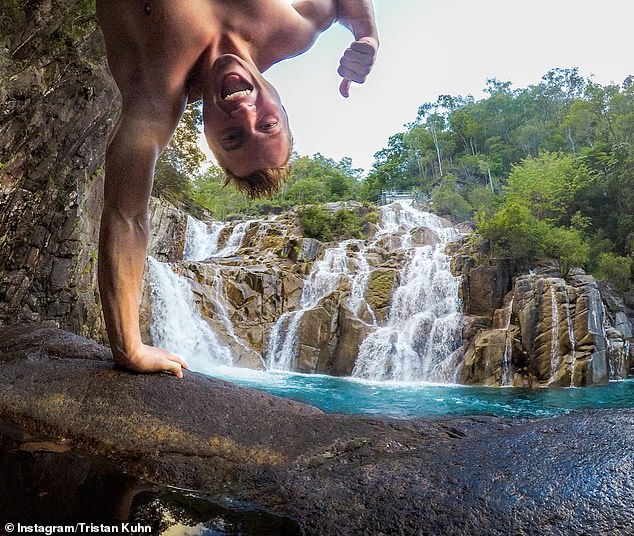 Another thing that Tristan found a ‘little annoying’ is having to pay extra money for condiments.

‘You pretty much always have to pay extra for any condiment you want and it’s usually quite expensive for some sauce like you’re gonna be paying between 50 cents and $2  for a little bit of sauce,’ he said.

‘For something that is usually free and included in your meal that definitely frustrates me about Australia.’

In Australia, it’s compulsory for all ages of riders to wear a bicycle helmet. People could face a hefty fine if they are found riding their bikes without a helmet.

According to research, wearing a bicycle helmet can reduce the risks of a serious head injury by up to 70 per cent, including skull fractures and bleeding in the brain.

But Tristan said he believed adults should be allowed to choose whether or not they want to wear a helmet while riding.

‘This is another thing I think is just kind of like an overstep of the government… it’s illegal to ride a bike here without wearing a helmet,’ he said.

‘Additionally this helmet rule doesn’t apply for skateboarding. Skateboards are so much more deadly and so much more dangerous than a bike but you don’t need a helmet for them.

‘I know more people than I can count on one hand that have gone into a coma or have died from skateboarding from hitting their head. But a bike, I don’t know anyone, so I get a little frustrated.’

Tristan said he asked some of his Australian friends what they hate about the country, to which they responded ‘the damn flies here’.

‘The flies are so pesky and annoying here,’ he said.

‘The bugs in general get in your face, they’re annoying but the flies are aggressive… They just attack you when you try to hit them off your face, they just come back, they buzz right around here and you cannot get rid of them.’