By Sarah Limbrick For The Mail On Sunday

The chatelaine of the real Downton Abbey and a close friend of the Queen left almost £1million in her will.

Jeanie, Countess of Carnarvon, who died aged 83 in April last year, bequeathed most of her fortune to her children and grandchildren.

Born in America, she married Henry Herbert, Lord Porchester, or ‘Porchy’, the only son and heir of the 6th Earl of Carnarvon.

Porchy would go on to become the Queen’s racing manager in 1956. He died in 2001 and so did not see the popularity of Downton Abbey, which used his home, Highclere Castle in Berkshire, as its backdrop.

Highclere Castle in Berkshire, the home of Jeanie, Countess of Carnarvon, and her husband Henry Herbert, Lord Porchester, was used as the backdrop in Downtown Abbey

However, Jeanie was said to delight in watching Dame Maggie Smith play the Dowager Countess.

For years, Highclere had badly needed major repairs. Because of the costume drama’s huge success, interest in the house sparked an influx of visitors, which helped pay the estimated £12 million cost of building work.

Figures released by the probate office reveal that Jeanie left a gross estate of £1,016,070 and, after her outstanding affairs were settled, a net estate of £972,044.

Her younger son, Harry, inherits a property and land in Wyoming, where his mother was born, as well as mineral rights and her shares in a water company.

Jeanie also bequeathed the Pink House at Penwood in Berkshire to her daughter, Lady Carolyn Warren, who is married to John Warren, the Queen’s bloodstock adviser. 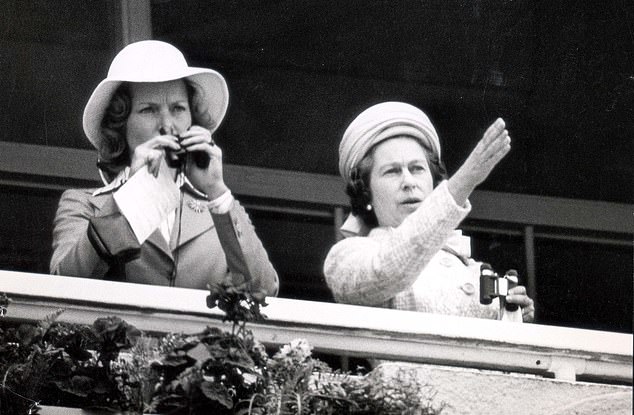 Jeanie, Countess of Carnarvon, who died aged 83 in April last year, left £1million in her will and bequeathed most of her fortune to her children and grandchildren. Pictured, Lady Porchester and the Queen at Epsom Derby Day

The countess gave the rest of her estate on trust for her nine grandchildren.

In an interview in 2015, the Countess admitted that Downton Abbey’s success had brought problems. ‘I do get annoyed when visitors chuck litter about,’ she said. ‘We fill black bags with the stuff.’

She also admitted to opening a bottle of champagne at the end of filming and barking instructions on the correct way to move antique furniture.

‘You lift a girl in your arms and a chair by its bottom,’ she would tell the show’s technicians.