American cop who shot dead an Australian mother and life coach, 40, who was just weeks away from marrying her fiance appeals his 12-year prison sentence for murder

The former US police officer who shot dead Australian life coach has appealed his prison sentence.

Mohamed Noor, 34, is serving a 12-and-a-half year prison sentence for the murder of 40-year-old Justine Ruszczyk Damond, originally from Sydney, in an alley behind her Minneapolis home on July 2017.

A Minneapolis jury found Noor guilty a year ago of third-degree murder and second-degree manslaughter but filed an appeal on Friday and is requesting a new trial as he claims his murder conviction ‘debased the criminal justice system.’

Mohamed Noor, 34, is serving a 12-and-a-half year prison sentence for the murder of 40-year-old Justine Ruszczyk Damond (pictured), originally from Sydney, in an alley behind her Minneapolis home on July 2017

‘Noor’s prosecution was a sordid series of events that debased the criminal justice system,’ Noor’s legal team wrote in a 69-page appellant’s brief filed in the Minnesota Court of Appeals.

‘Noor’s convictions must be reversed and his case remanded for a new trial.’

Ms Damond was weeks away from marrying her American fiance Don Damond.

She was home alone just before midnight on July 15, 2017 when she heard a woman’s screams coming from the alley.

She called 911 and when Noor’s police vehicle pulled up in the dark alley she walked out barefoot and in her pyjamas.

Noor claimed he thought he was being ambushed and, while sitting in his police car, shot across his partner Matthew Harrity.

The bullet went out the vehicle’s window and fatally struck Ms Damond in the stomach. 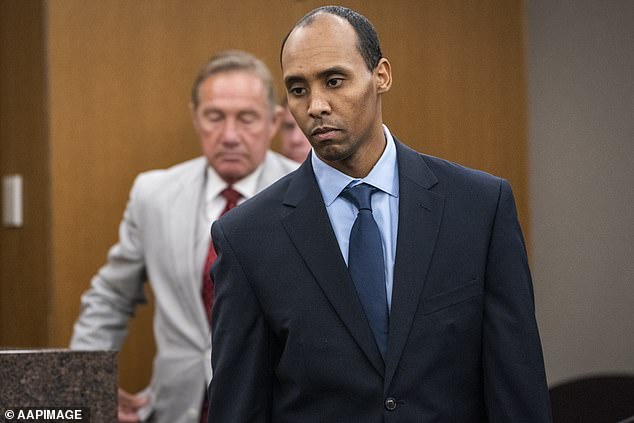 Noor, in his appeal, claims he was deprived of his due-process right when he was prevented from ‘providing crucial context’ for why he perceived an ambush.

Noor also claimed there was insufficient evidence to sustain his third degree murder conviction and overcome his defence he reasonably used deadly force as a police officer.

The appeal also argues prosecutors ‘drew on demographic and gender biases to suggest that it was unreasonable for Noor to fear for his and Officer Harrity’s safety’.

Noor’s lawyers describe how prosecutors emphasised to the jury Ms Damond was ‘a Caucasian female’ living in a ‘peaceful, single-family, residential neighbourhood in South Minneapolis’.

‘The State repeatedly sought to shield from the jury the context for Noor’s perception that he and his partner were under ambush, even though that perception is precisely why Noor decided to use deadly force,’ Noor’s lawyers wrote.

‘Simply put, the State sought to deny Noor even the ability to defend himself.’

Ms Damond’s family filed a $US50 million ($A79 million) civil lawsuit against Minneapolis last year and just days after Noor’s conviction the city agreed to pay $US20 million ($A31 million).

How did Ms Damond end up dead?

Justine Ruszczyk Damond, 40, formerly of Sydney’s northern beaches, was home alone in Minneapolis just before midnight on July 15, 2017 when she heard a woman’s screams.

She called 911 to report a possible sexual assault.

When Noor’s police squad car arrived in the alley at the rear of her home she approached the vehicle.

Noor and Harrity testified that Ms Damond startled them after they heard a loud bang on the squad car.

He said he feared an ambush and Noor said he made the split-second decision to shoot across his partner and out the car window at Ms Damond.

Noor also claimed that his partner did not get his gun out of its holster and that he fired at Ms Damond to protect his partner.

Noor was sacked from the police force following the incident.

She said body cam from an officer, who later attended the scene, had recorded officer Harrity saying he had his gun out, but did not fire.

Prosecutor Patrick Lofton also claimed that Noor shot too quickly before he had identified a target.