American freed from Yemen and welcomed home by Trump was held by criminal gang, according to report

U.S. citizen Danny Burch had been detained in Yemen and was later released to Oman in January of 2018

An American who was freed from captivity in Yemen last month had been held for over a year by a criminal group and not anyone affiliated with terrorism, it has been reported.

It had been previously assumed that Danny Burch, who was abducted by gunmen in September 2017, was being held by Houthi rebels in Yemen.

But documents reviewed by Yahoo! News show that Burch was kidnapped by armed members of a gang.

The public did not know who Burch was until Monday, when President Trump tweeted that the United States and a key ally, the United Arab Emirates, helped secure his release.

Burch was freed last month and sent to Oman. Trump tweeted from Air Force One that he has been reunited with his wife and children.

‘Recovering American hostages is a priority of my Admin, and with Danny’s release, we have now secured freedom for 20 American captives since my election victory,’ Trump boasted.

‘We will not rest as we continue our work to bring the remaining American hostages back home!’

Trump was on his way to Vietnam, where he will meet North Korean ruler Kim Jong Un, when he tweeted the news about Burch.

Burch, an employee of the Yemeni Safer oil company, was abducted in September 2017 by armed men in the capital of Sanaa.

In 2014, civil war broke out in the country after Houthi rebels took control of the capital and wide swaths of the country. 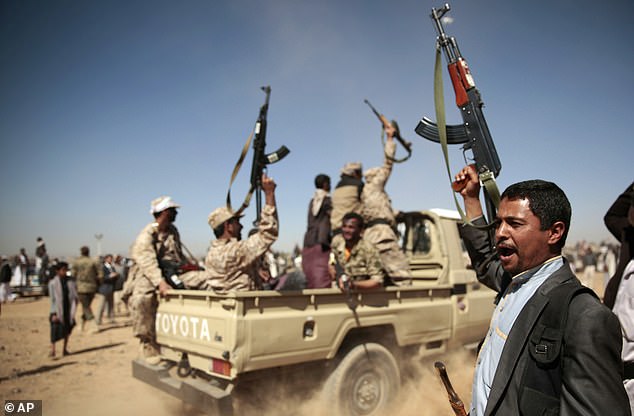 It was widely believed that Burch was being held by Houthi rebels, who are fighting the U.S.-backed Saudi alliance, but a new report indicates that criminal gangs took him captive. Tribesmen loyal to Houthi rebels are seen above in Sanaa in this January 2017 file photo

Saudi Arabia, with the backing of the United States, intervened in 2015. The Saudis have been accused of war crimes that have led to a humanitarian disaster in the country.

The U.S. and other Western countries say support for Saudi Arabia is crucial as part of the ongoing ‘war on terrorism.’

A security agency run by the Houthi rebels in Yemen wrote up a secret report about Burch’s kidnapping.

The report, dated September 23, 2017, stated that he was abducted by a criminal gang in front of a restaurant on a main street in Sanaa.

The ‘reasons and motivations’ for the ‘abduction of a foreigner…are unknown,’ according to the report.

The agency issued an updated report on September 30, stating that Burch was in the custody of a gang in Yemen’s Marib province.

Marib is a section of Yemen that has stayed loyal to the Saudi-backed government trying to expel the Houthis.

It is unclear why it took more than a year to free Burch even though he was captive in territory held largely by Saudi Arabia and the UAE.

The State Department and the Pentagon are not commenting on the Burch kidnapping.

‘The UAE is pleased to have been able to assist the US in facilitating Mr. Burch’s release,’ the country’s embassy in Washington said on Twitter. 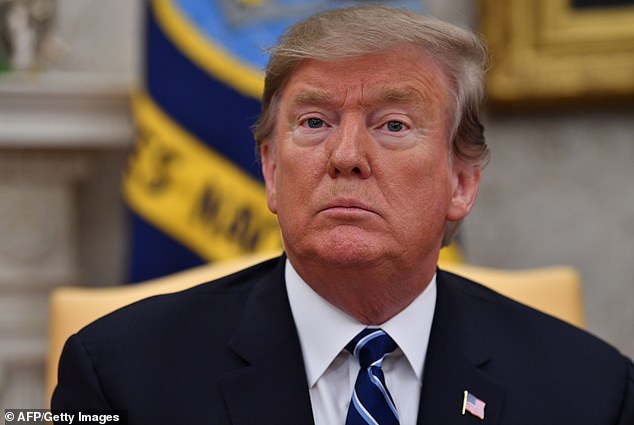 President Trump said Monday, as he flew to a summit in Vietnam, that an American being held in Oman for the last year has been released from custody. He’s pictured here at the White House earlier in the day 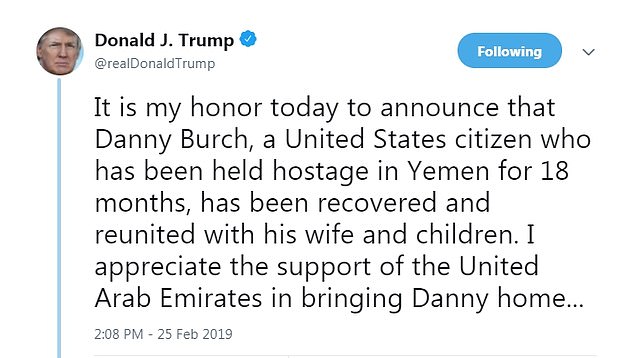 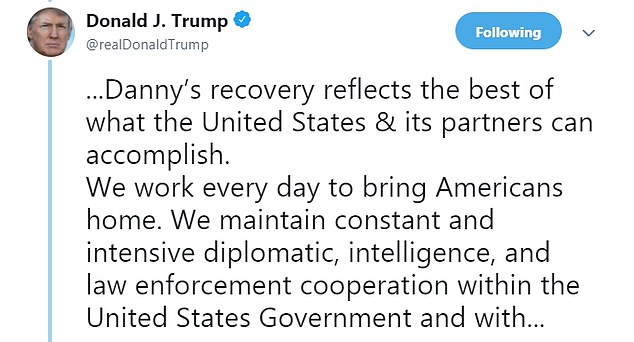 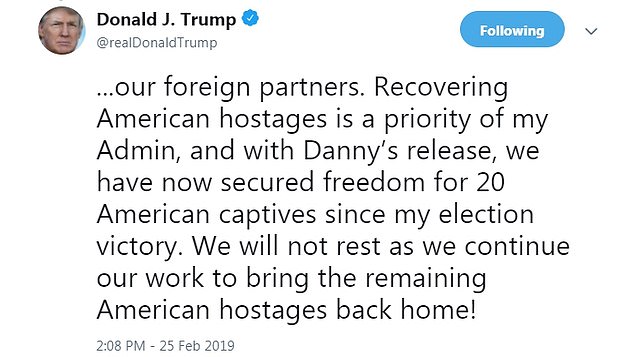 Trump will have access to the internet throughout the long-haul flight, meaning he could make any number of declarations while he’s in the air. He will not land until Tuesday

An employee of Yemeni Safer, his wife, Nadia Forsa, told the New York Times that he was abducted in ‘broad daylight’ on a Saturday morning. She said he disappeared after taking their sons to a sports club.

Witnesses said at the time that five plain-clothes carrying weapons took him hostage in a vehicle with no license plates. Two men ditched Burch’s car afterward.

At the time it was unclear who had taken him or why, although it is not uncommon for Americans living in Yemen to be kidnapped by the rebel group.

The U.S. does not have an embassy in the country – it suspended operations in Yemen in 2015.

Neither a White House statement nor a State Department statement explained Burch’s recovery or where he had been released to.

It said the Alabama man was coming ‘home’ but didn’t specify where that was.

In a formal statement, the president said: ‘It is my honor today to announce that Danny Burch, a United States citizen who has been held hostage in Yemen for 18 months, has been recovered and reunited with his wife and children. I appreciate the support of the United Arab Emirates in bringing Danny home.

‘Danny’s recovery reflects the best of what the United States and its partners can accomplish. We work every day to bring Americans home. We maintain constant and intensive diplomatic, intelligence, and law enforcement cooperation within the United States Government and with our foreign partners.

‘Recovering American hostages is a priority of my Administration, and with Danny’s release, we have now secured freedom for 20 American captives since my election victory,’ he said. ‘We will not rest as we continue our work to bring the remaining American hostages back home. Today, we join Danny and his family in celebrating his return.’

The State Department in a separate statement confirmed on Monday that Burch had been ‘recovered’ with the help of the UAE and Special Presidential Envoy for Hostage Affairs Robert O’Brien.

‘In 2017, U.S. citizen Danny Burch was taken hostage from Sanaa, Yemen. Today he is safe and secure, and is reunited with his wife and children,’ the statement said. ‘The family has asked for privacy as they recover from this ordeal. The safety and well-being of Americans remains one of the highest priorities of the Trump Administration.’