Alejandro Aranda during his American Idol audition became an instant frontrunner with the judges saying they were ‘in the presence of greatness’ and a ‘genius.’

The second round of All-Star Duets on Monday showed how that performance also made another huge fan – hip singer-songwriter Ben Harper, 49.

On a night where Chris Isaak, 62, performed his legendary song Wicked Game and Julia Michaels, Lukas Graham and lovelytheband added to the star-power, Ben insisted he was only there as a fan of Alejandro.

‘Truth be told, I got five kids, I should be skateboarding right now – I ain’t got time for this s***,’ Ben said.

‘Alejandro feels to me like a true artist,’ he added. ‘When you’re that soulful, the sky is the limit. And may the sky always be the limit for the dreamers.’

In fact, Ben later realized he had heard Alejandro before – when he came into his music store, the Folk Music Center in Claremont, California, the town next to Alejandro’s home in Pomona. 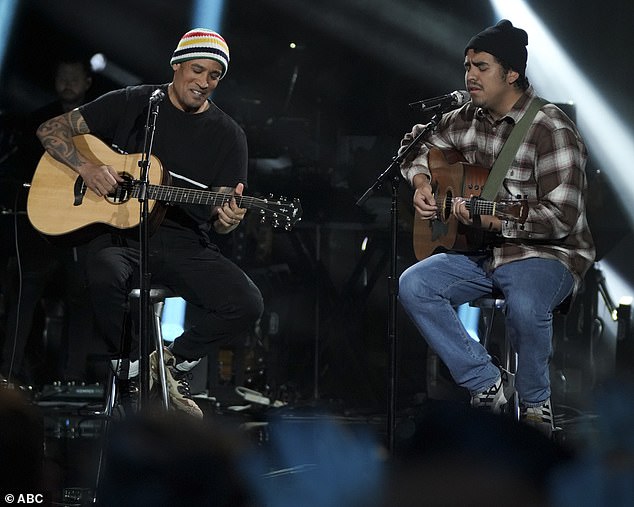 True artist: Ben, 49, said he has five children and no time, but he heard Alejandro and was in 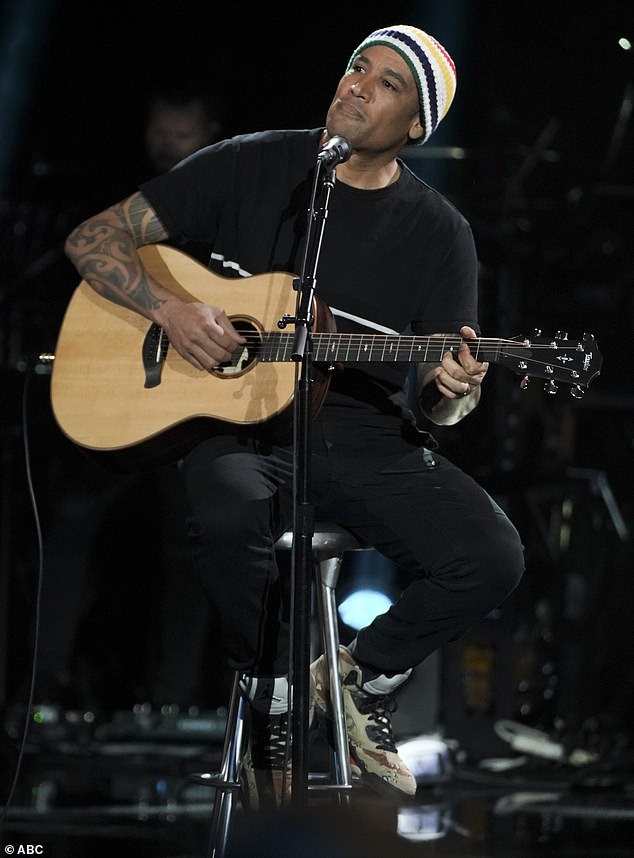 ‘His playing is so singular, I poked my head out of the shop, all dusty working on instruments, and I’d hear him playing and be like, ‘Yeah, he’s got it,” he recalled. ‘I remember his playing.’

Alejandro’s duet with Ben won him the final spot in the top 14, with Ryan Hammond, Logan Johnson and Raquel Trinidad going home.

‘That was just a magical moment right there in American Idol history,’ Lionel Richie, 69, insisted of their duet on Ben’s There Will Be A Light. 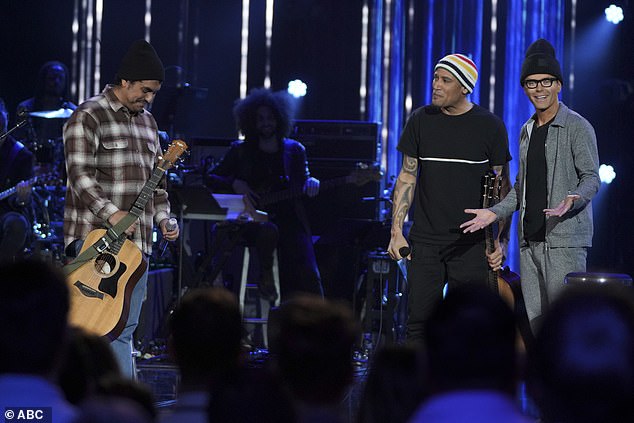 Calling Alejandro’s voice and guitar playing a ‘lethal combination,’ Lionel insisted: ‘Even when it’s done here, no matter where you land, I guarantee you here now – you have a career.’

Katy Perry, 34, praised his ‘authenticity,’ saying: ‘If you win American Idol and you become the biggest singer-songwriter in the world, you’re always just gonna be that homie.

‘I just love how real and authentic and vulnerable and sensitive … you’re my emo homie.’ 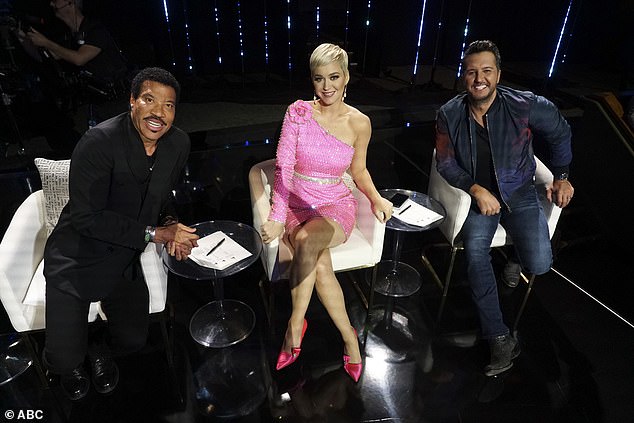 Ben later insisted the duet only made him a bigger fan.

‘I’m about to be not the most famous person from my hometown once word gets out about him, that’s the truth,’ he said. ‘But I’ll take second. I’ll play second fiddle to that any time, man. That’s how special his talent is.’

Chris Isaak, meanwhile, helped create another classic moment – with the judges gasping as he played his classic Wicked Game. 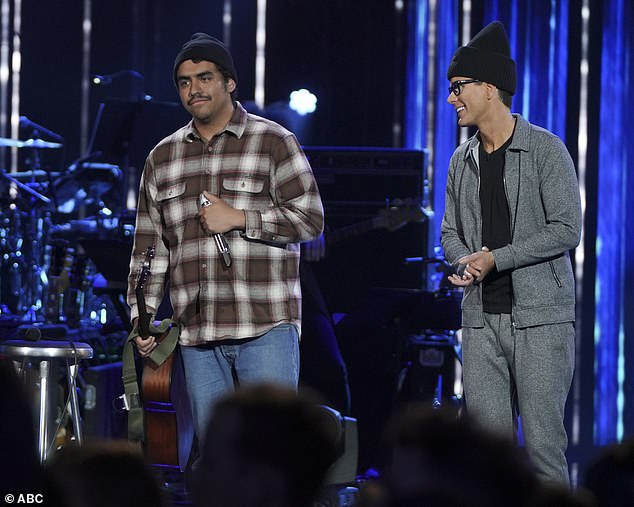 The frontrunner: Alejandro advanced into the top 14 after his duet

It helped get teacher and reality star Evelyn Cormier – who also performed the song in her audition – the night’s first spot through to the next round.

Evelyn, 19, also revealed that when she first applied for the show she put the singer down as her dream duet, saying: ‘This is my dream.’

Chris also admitted: ‘I’ve never done Wicked Game as a duet, so this is kinda fun for me.’ 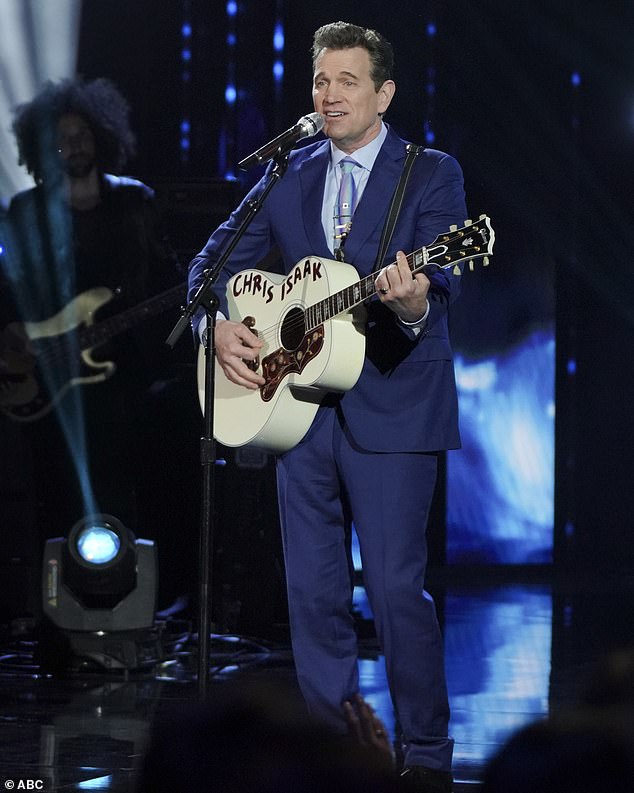 The sound of his voice soon had the judges gasping ‘wow,’ and host Bobby Bones – standing in as Ryan Seacrest took his first ever sick day in 17 seasons – gushed about how he was ‘a big fan’ wanting a photo.

‘It’s like I got a front row seat to a really special moment just then,’ Luke admitted, while Lionel insisted Evelyn matched Chris as a ‘stylist.’

Katy told her: ‘I believed every word that you were singing. It’s just an ‘it’ factor that you can’t learn, or buy. You just got it.’ 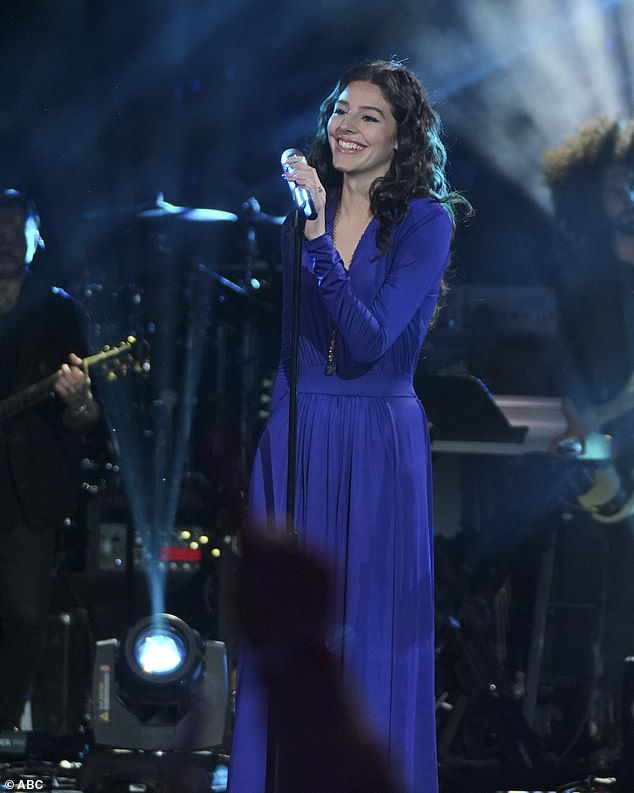 It factor: Evelyn was told by Katy that she has the ‘it’ factor

Dimitrius Graham, 27, was next through, with Katy calling him ‘a male Beyonce’ after his performance with Lukas Graham.

Lukas, 30, said they had quickly bonded over shared tough times in their past, and also joked that they were forming a boyband called The Grahams.

After their performance of Lukas’ Love Someone, Luke told them: 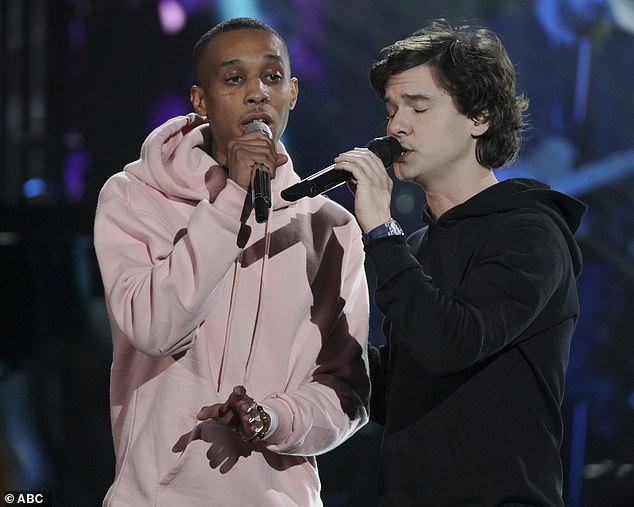 Teaming up: Dimitrius Graham and Lukas Graham teamed up to sing Lukas’ Love Someone

Lionel also called it a ‘fabulous duet’ that was ‘perfectly executed.’

Jeremiah Lloyd Harmon, 25, was next through with a performance of Cyndi Lauper’s Time After Time that Katy insisted was ‘a spiritual moment.’ 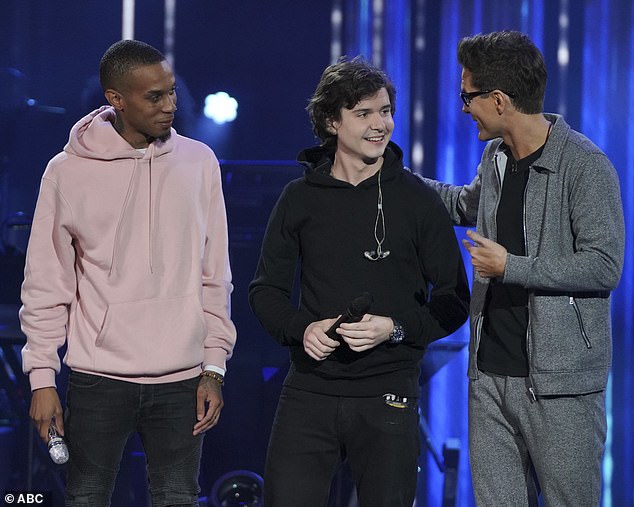 Fabulous duet: Lionel called the performance a ‘fabulous duet’ that was ‘perfectly executed’

‘It’s like your guys’s souls were singing to each other,’ she said of Jeremiah and award-winning Broadway star Cynthia Erivo.

Luke quickly agreed, saying: ‘I was wanting roses to throw onstage to stand up and start shouting words from the opera, like ”Bravo” – that’s all I know. It was incredible, just incredible. You just knocked it out of the park.’ 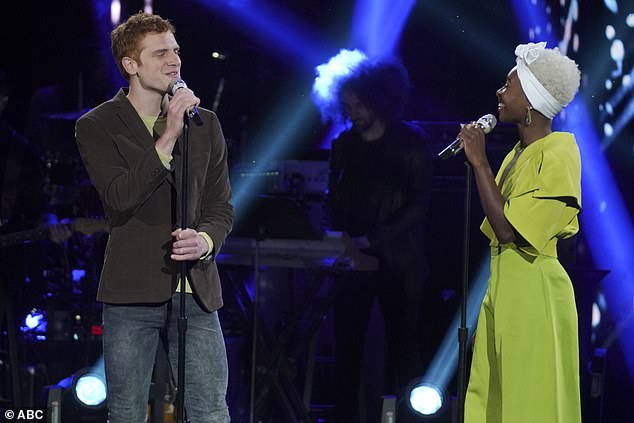 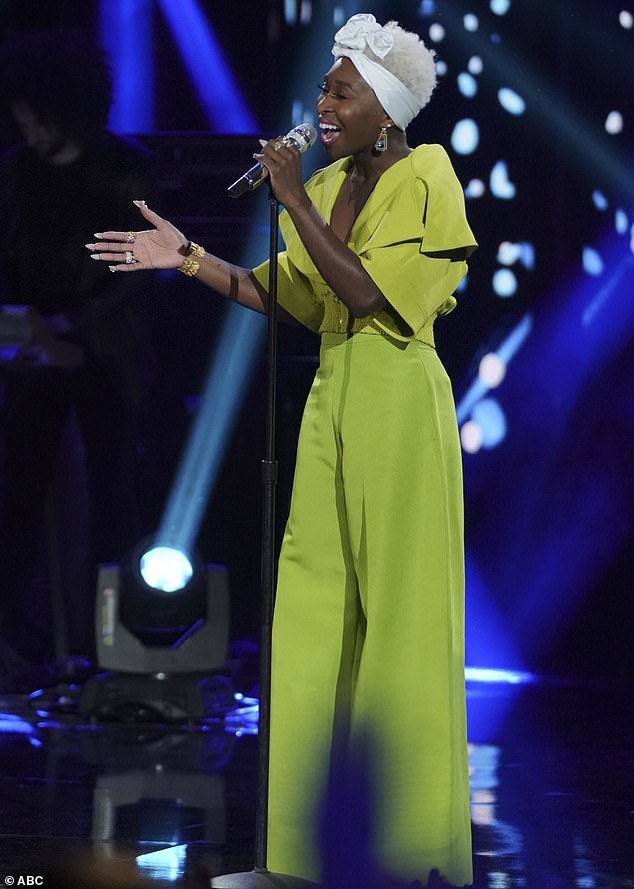 Broadway star: Cynthia and Jeremiah were praised by the judges for their performance with Katy calling it ‘a spiritual moment’

Cynthia, 32, had called Jeremiah ‘a huge inspiration’ for being so open about his homosexuality despite it alienating him from his religious family.

‘You have the right to be who you are, fully,’ she told him. ‘It doesn’t serve you to hide a part of yourself that could open you up to all the brilliant things that you are.’

High school student Alyssa Raghu, 16, was next through after her duet with Julia Michaels on her song Issues. 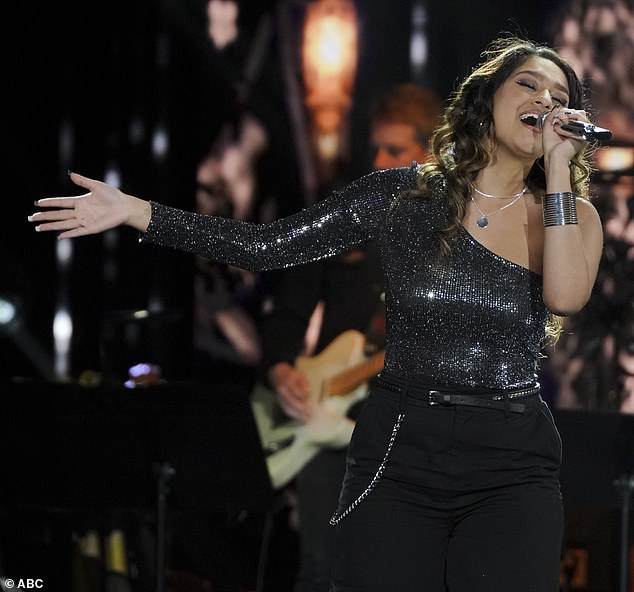 Teen talent: High school student Alyssa Raghu, 16, was next through after her duet with Julia Michaels on her song Issues

Katy had praised her ‘fresh take’ with ‘alternative melodies that were so good’ – but seemed most please with their shared dress sense.

‘Obviously, you got the one shoulder memo,’ Katy quipped off their matching designs. 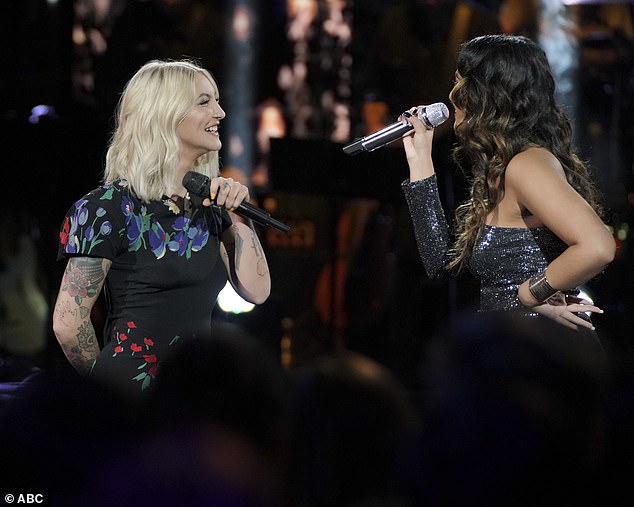 Fresh take: Julia and Alyssa teamed up for a ‘fresh take’ on her song Issues

Next through was gravely voiced Wade Cota, 27, who got inspiration from the unlikeliest of places – a security guard standing in the rain.

The contestant shared his story of seeing the guard wearing a cool black jacket, asking to try it on – then persuading him to let him wear it onstage.

‘I was like, I don’t have anything to wear. I’m gonna look stupid up there – I’ve got a blue shirt and all these guys are gonna be wearing black,’ he said of lovelytheband. ‘He let me use this jacket and now here it is.’ 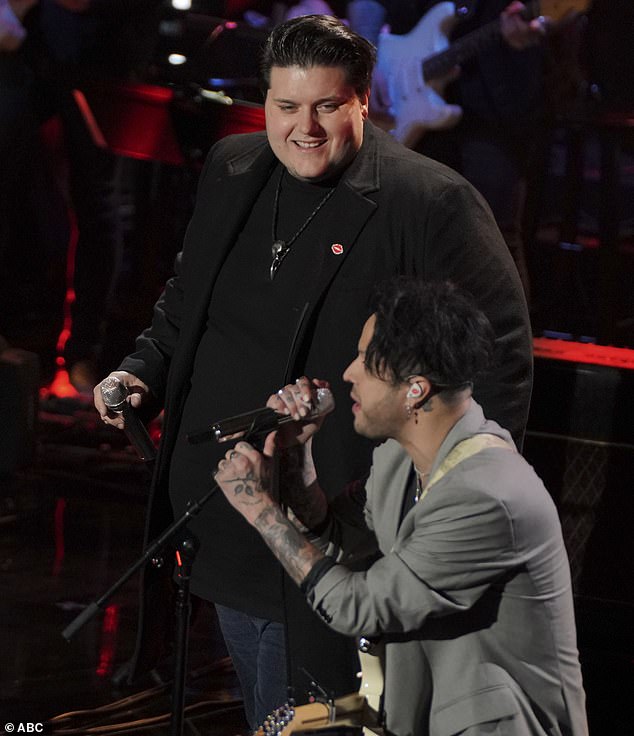 Cool jacket: Wade Cota admitted to borrowing a black jacket from a security guard for his performance with lovelytheband

As well as looking ‘cool,’ he insisted it helped give him a sexier energy, insisting when Katy praised his ‘otherworldly energy’: ‘It’s the jacket.’

‘You are just turning into a real bonafide rock star,’ Katy told him, while Lionel insisted: ‘You’re going places, my friend.’

After their performance of Broken, lovelytheband told Wade he was ‘part of the band’ – with him joking: ‘Just waiting for the check.’ 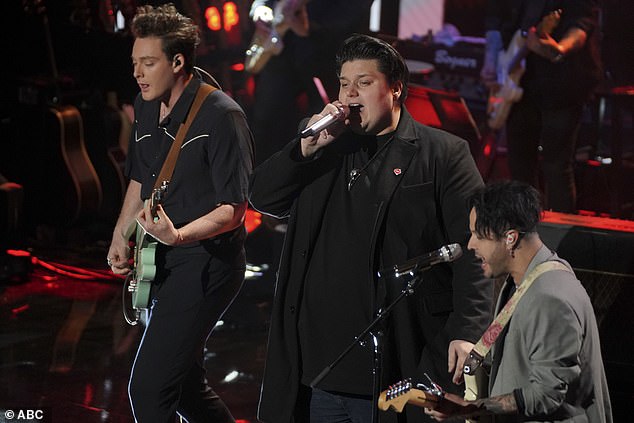 Killed it: The singer performed Broken and the group joked that he was part of the band

Eddie Island, 25, got the night’s other spot thanks to his duet with Lukas Graham on his 7 Years, which Luke called ‘the perfect fit for what we’re wanting out of you.’

‘You’ve managed to make every performance as if you’re having the time of your life,’ Lionel told him, insisting: ‘You can actually sing!

‘What started out as a joke is no joke now, my friend. Take it to the next level,’ he said, with Eddie joking: ‘Plot twist!’ 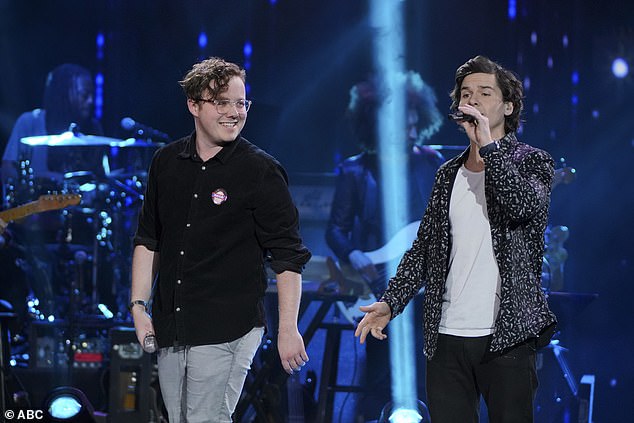 No joke: Eddie Island advanced after his duet with Lukas Graham

Katy praised his ‘infectious’ energy, saying: I just want to bottle you up and have some of you.

‘Whenever you’re onstage I’m on a different planet with you.’

Ryan Hammond, 25, failed to make it through despite Katy gushing of his performance: ‘I felt the spirit!’ 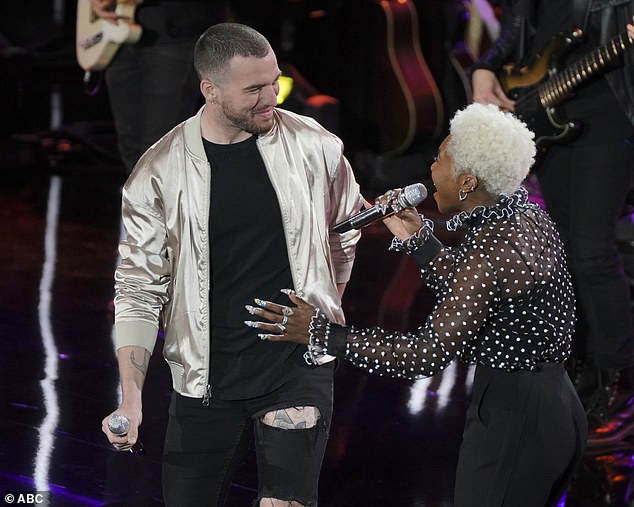 He had never before heard his song, Sam and Dave’s Hold On, I’m Comin’ – a similar issue for Raquel Trinidad, 21, who failed to make it through with Elton John’s Tiny Dancer, which she had also never heard before.

‘I never heard you sing that well,’ Katy had insisted of her duet with lovelytheband.

Logan Johnson, 20, was also out, despite Lionel saying he ‘passed the test’ with his first duet, performing Julia Michaels’ What A Time with her. 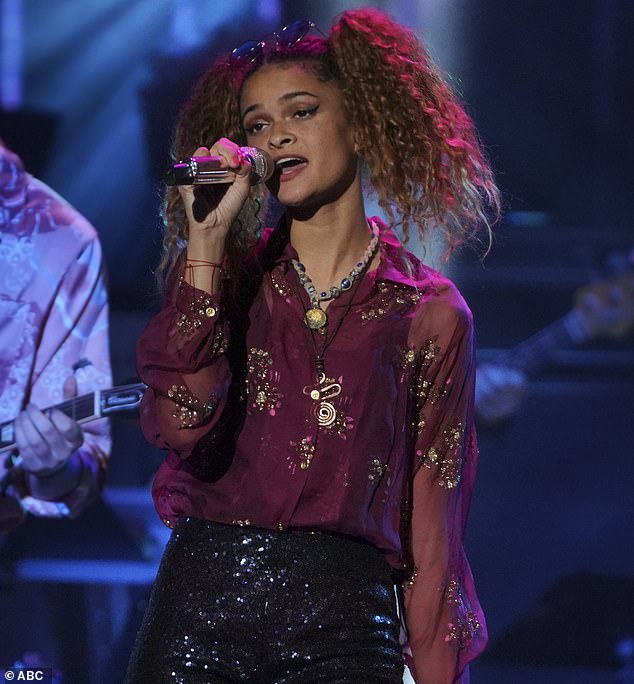 Never heard: Raquel Trinidad, 21, failed to make it through with Elton John’s Tiny Dancer, which she had never heard before 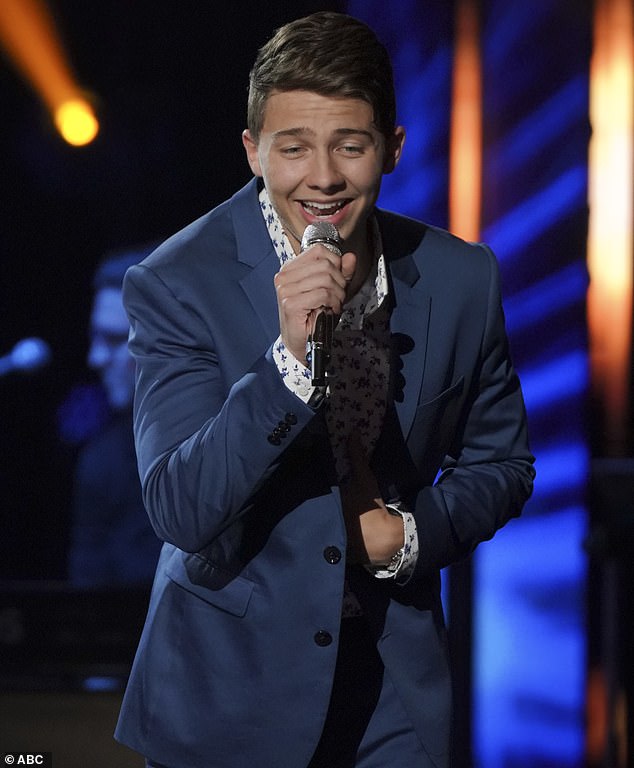 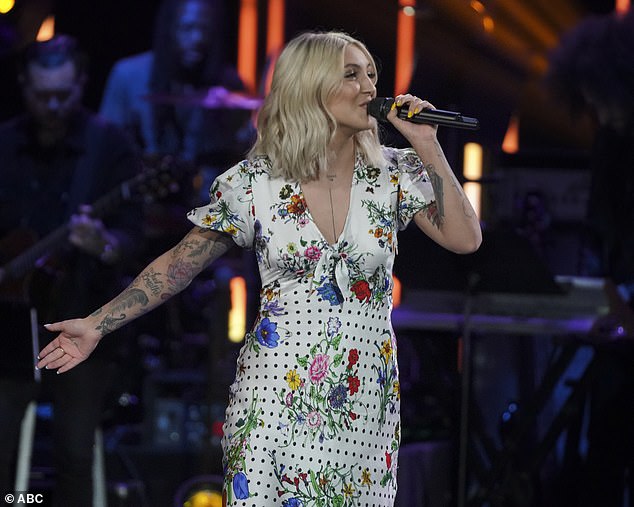 Her song: Julia sang What A Time with Logan

Katy also insisted she was ‘hanging on to every word,’ saying: ‘It was so beautiful to watch. I got lost in the moment. It was just like a star on the stage. That’s a good sing,’ she smiled before the decision to ax him.

The episode was also notable for being the first one in 17 seasons without host Ryan Seacrest, 44.

‘Fact is I woke up and was just having a terrible hair day and couldn’t go out in public,’ he joked in a section taped after the performances, filmed a few weeks ago, before saying he ‘had to cash-in on my very first sick day.’ 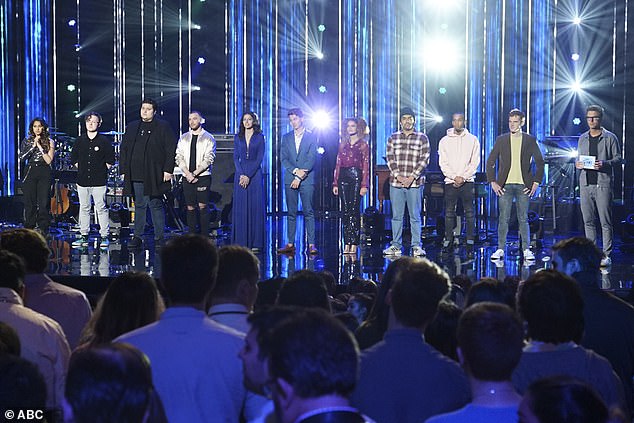 Replacement Bobby, 39, took the stage and told everyone: ‘I am not Ryan Seacrest.

‘Sadly, Ryan is sick and I look most like him so they asked me to fill his shoes tonight. Ryan, love you, buddy, hope you get better,’ said Bobby who has been serving as the house mentor all season.

American Idol will return next week on ABC as the top 14 will perform and viewer voting will begin. 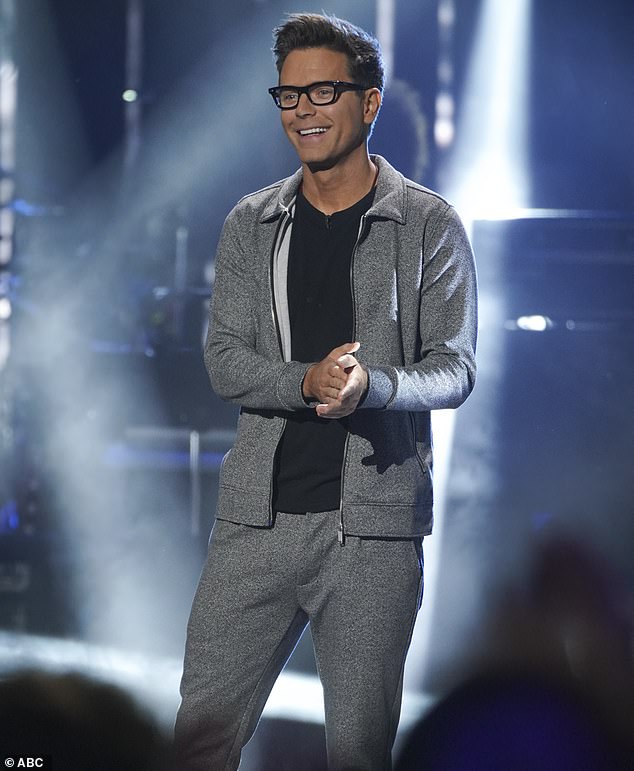 Substitute host: Bobby stepped in to host after Ryan Seacrest called in sick for the first time in 17 seasons