American businesswoman and ex-model Jennifer Arcuri told friends she was having a sexual affair with Boris Johnson, it was claimed last night.

Among those who she confided in were university classmates and a Conservative Party activist who said: ‘She told me they were sleeping together,’ according to the Sunday Times.

The prime minister has been dogged by allegations he improperly provided benefits to the entrepreneur’s company during his period as London Mayor.

But as he continues to evade questions surrounding his friendship with Ms Arcuri, a US reporter who interviewed the entrepreneur has given a bombshell interview detailing Mr Johnson and her’s close relationship.

American businesswoman and ex-model Jennifer Arcuri (right) told friends she was having a sexual affair with Boris Johnson, it has been claimed 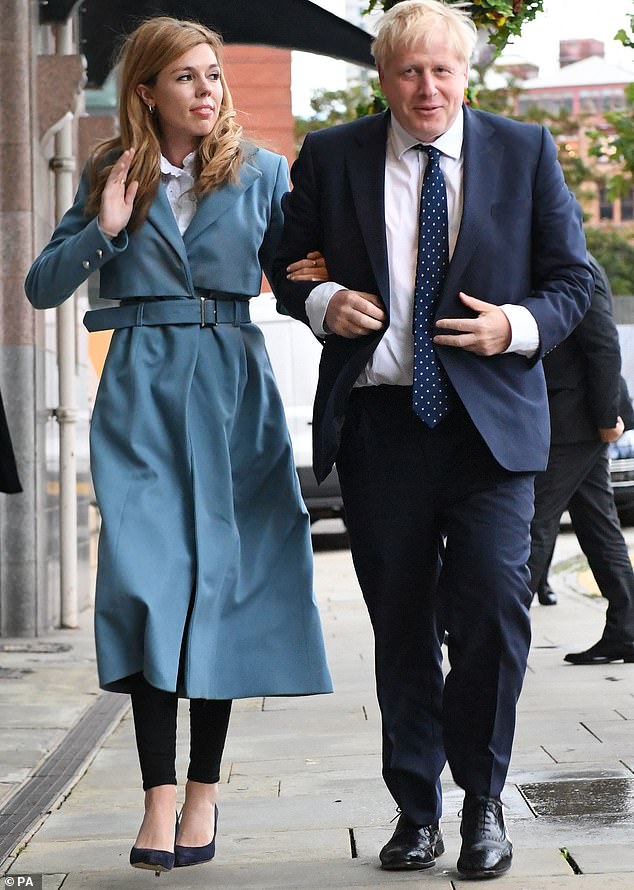 The Prime Minister arrived in in Manchester with girlfriend Carrie Symonds on Saturday evening, exuding an air or calm as the couple linked arms

David Enrich, the financial editor of the New York Times, said that Ms Arcuri had confided to close university peers she was sleeping with Mr Johnson.

He said: ‘Two friends from her business class said they had been told by Arcuri that she was sleeping with Boris.’

In 2013, Mr Enrich spoke to the businesswoman and several of her tight-knit friendship group for an article he was writing.

Referring to notes which he has kept from those conversations, he alleges that Ms Arcuri said that Mr Johnson warned her to steer clear of speaking to the press.

And Mr Enrich said that her classmates at London’s Hult International Business School repeatedly stated that the entrepreneur had confided to them of her affair with Mr Johnson.

His reports are backed up by the account of a Conservative Party activist who alleges that Ms Arcuri told him during the 2015 general election campaign of her sexual relationship with the now Premier. 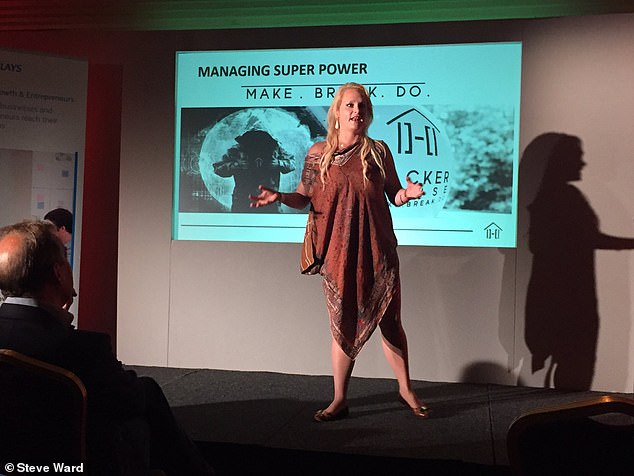 The prime minister has been dogged by allegations he improperly provided benefits to the entrepreneur’s (pictured) company during his stint as London Mayor. 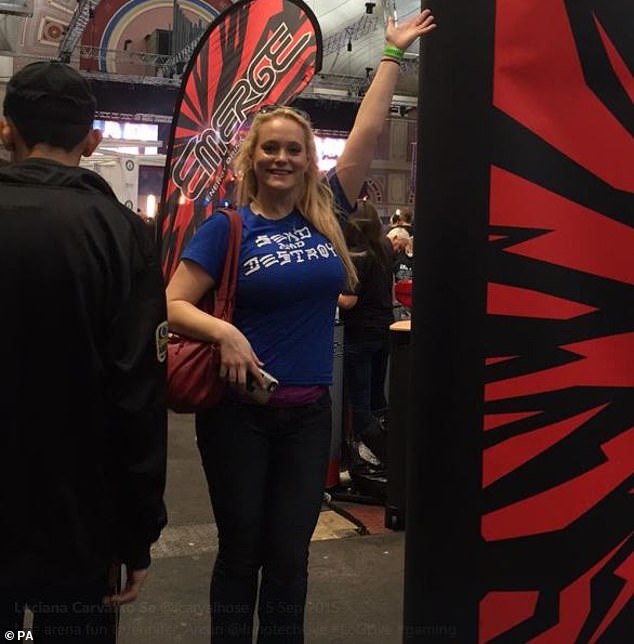 ‘She told me they were sleeping together,’ said this grassroots campaigner, who also claimed that the ex-model would not deny the affair when pressed.

These fresh revelations of the prime minister’s links to Ms Arcuri came on the eve of his party conference where he will hope to shake off a tough week in Westminster.

He arrived in Manchester with girlfriend Carrie Symonds on Saturday evening, exuding an air or calm as the couple linked arms.

But these latest claims heap pressure on the embattled Tory leader who is staring down the barrel of four investigations into his links with Ms Arcuri.

The Greater London Authority (GLA) said its monitoring officer had recorded a ‘conduct matter’ against Mr Johnson over allegations Ms Arcuri received favourable treatment because of her friendship with him while he was Mayor of London. 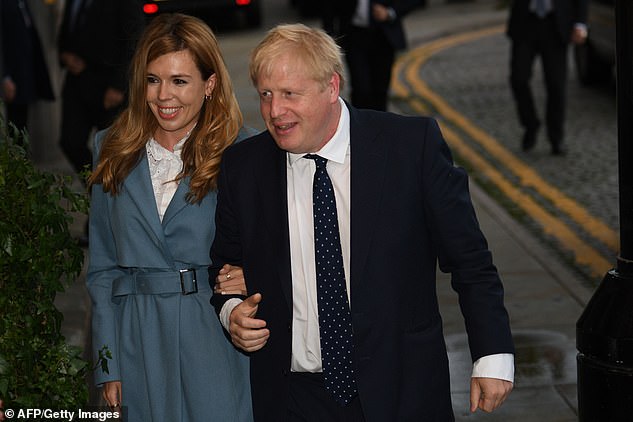 Ms Symonds, 31, braced for the northern chill in a long blue buckled-up coat as she clutched the Prime Minister’s forearm 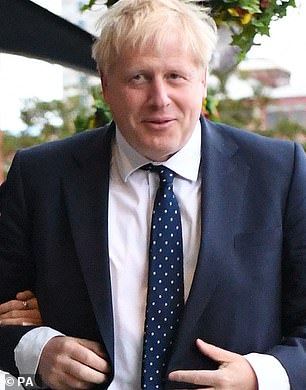 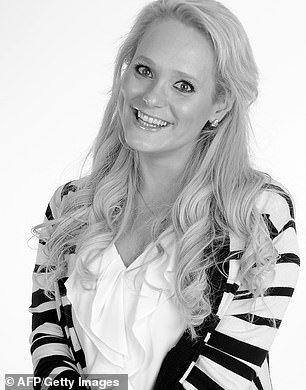 Jennifer Arcuri is the founder and CEO of Hacker House, a cyber-security training company. Mr Johnson has evaded questions about his relationship with her

Journalist accuses PM of squeezing her inner thigh in 1999 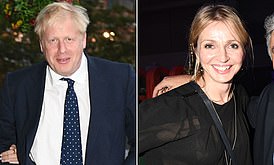 Boris Johnson squeezed a journalist’s thigh at a private lunch with such force it made her jerk bolt upright, it was claimed last night.

Charlotte Edwardes said that in 1999 the prime minister – then the editor of the Spectator magazine – grabbed a chunk of her flesh from her upper leg.

And the columnist said that she was not the only female guest to be touched inappropriately by Mr Johnson that night.

Describing the lunch in Style magazine, Edwardes wrote: ‘Under the table I feel Johnson’s hand on my thigh.

After the lunch thrown by the Spectator at their then London office, Edwardes said she confided about Mr Johnson’s wandering hands to another woman, who replied: ‘Oh God, he did exactly the same to me.’

The latest allegations of infidelity follow a string of well-publicised stories involving Mr Johnson’s private life, some of which plagued his 25-year marriage to second wife Marina Wheeler.

In 2004 he was sacked from the Tory frontbench over a reported affair with journalist and colleague at the Spectator Petronella Wyatt.

He described claims about the relationship as ‘an inverted pyramid of piffle’ at the time.

Affair claims reared their head again in 2006 when it was reported that the married father-of-four had been romancing Anna Fazackerley of the Times Higher Education Supplement.

The Appeal Court ruled in 2013 that the public had a right to know that he had fathered a daughter during another adulterous liaison with another woman, Helen Macintyre, while mayor of London in 2009.

Despite surviving years of turmoil, Mr Johnson and his lawyer wife separated and began divorce proceedings in 2018 and he is now living at Downing Street with former Tory Party worker Carrie Symonds, 31.

Last night, journalist Charlotte Edwardes accused the prime minister of squeezing her thigh at a private lunch when in 1999 when he was editor of the Spectator.

She wrote: ‘Under the table I feel Johnson’s hand on my thigh.