American office worker, 20, loses his eye after thug smashes pint glass in his face in Birmingham

A young American will spend the rest of his life with facial scars and a glass eye after he was pinned to a wall and glassed in the face in a brutal racist attack in a Birmingham club.

Jonathan Hockaday, 20, from Ohio, was visiting family in the Midlands this April when a thug smashed a pint glass in his face in the course of a lengthy assault in which Mr Hockaday tried to protect his brother.

His assailant is serving 12 years for causing grievous bodily harm with intent, but customer service worker Mr Hockaday will have scarring and numbness for life.

Ohioan Jonathan Hockaday, 20, was pinned to a wall and glassed in the face by a racist thug in a Birmingham club after he tried to protect his brother

He has set up a GoFundMe page to try to cover the spiralling medical bills of repeated surgeries – none of which succeeded in saving the sight in his left eye.

Mr Hockaday said: ‘The attack happened around midnight, in the early hours of April 14 when my brother, cousin and I were at a local club for the night.

‘It seemed that the assailant wanted a fight and he began to antagonise me for being from a different country.’

Mr Hockaday, whose father is English, grew up in the USA and has an American accent and dual nationality. He had come to the UK to celebrate his birthday with his extended family.

He continued: ‘He attacked me and then he turned to also attack my brother.

‘I interfered to protect my brother and so the assailant came at me with a pint glass.

‘He pinned me against the wall and smashed the pint glass on the left side of my face.’ 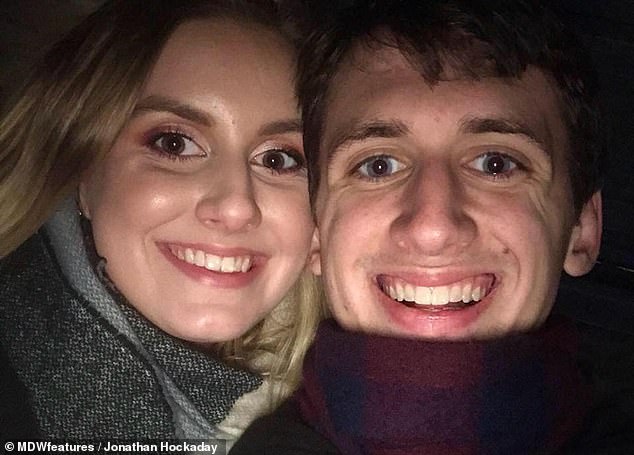 Jonathan Hockaday, right, with his sister Kirby and his brother 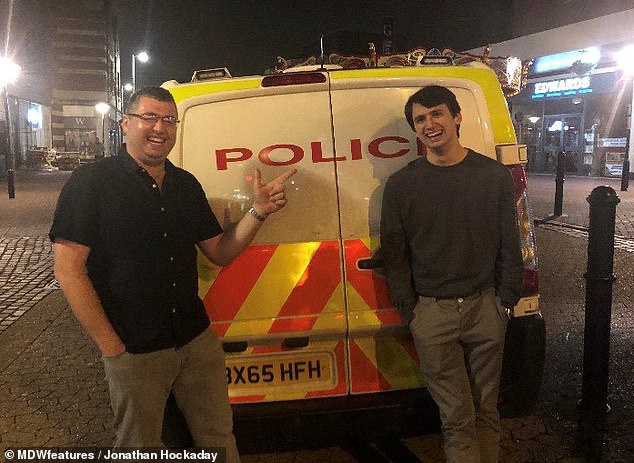 Jonathan (right) with his cousin at the beginning of the night of the attack in April. Hours later he would be rushed to hospital with glass shards in his eye

Other clubbers ran to stop the bleeding and paramedics rushed Mr Hockaday to hospital where, over a series of surgeries, surgeons worked to remove the shards of glass from his cheek, nose, and eyelid, and to try to save the sight in his ‘mangled’ eyeball.

They even placed a protective eye shield between his eyeball and his eyelid. But ultimately their work was in vain.

Mr Hockaday said: ‘I underwent multiple surgeries to remove the glass and to attempt to salvage my eye as well as my eyesight.

‘My condition was very bad – my eyeball was mangled from the impact of the glass and I completely lost all vision on my left side.

‘So, I had to relearn a lot of daily tasks due to the change in depth perception.

‘I also had lacerations on the back of my head, shoulder blade and cheek.

‘Even today I have scarring across the left side of my face.

‘The intense nerve damage has left me numb from my eyebrow up onto my scalp and towards the back of my head.’ 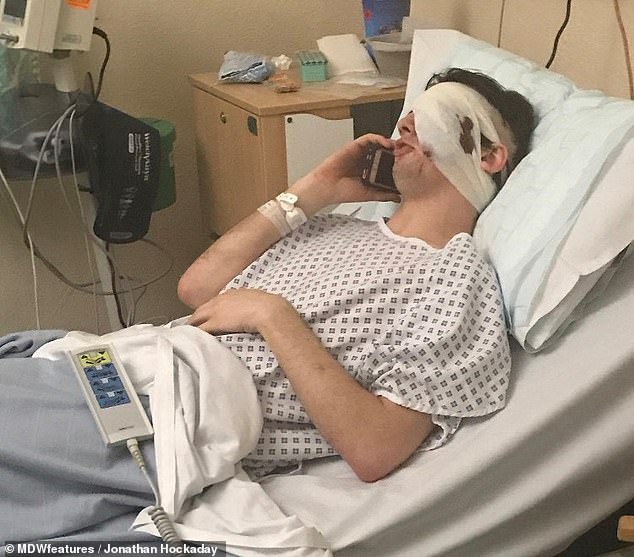 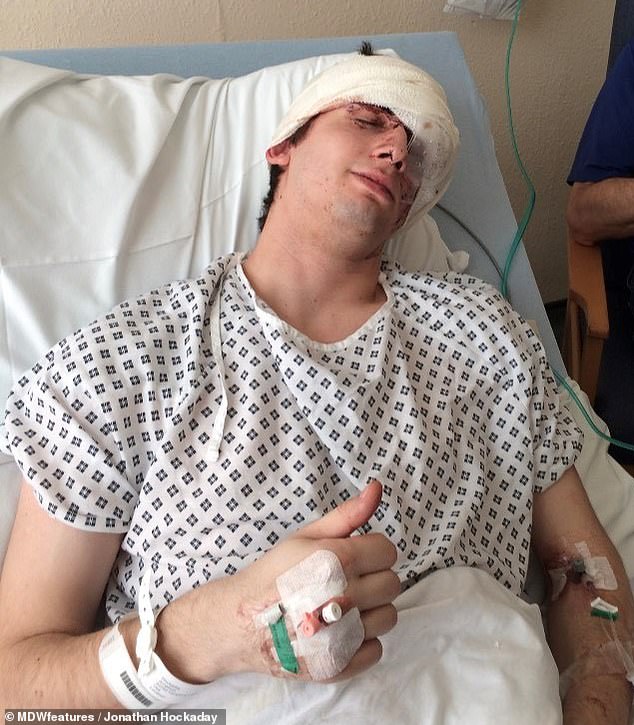 He remained positive during his convalescence, saying: ‘I hope people remember the importance of staying strong. Your life can change drastically and unexpectedly but don’t let that get you down’

Three months later, after his return to America, the swelling on his face and eyelids had gone down enough for Mr Hockaday to be fitted with a prosthetic eye.

He cannot see through it, but it has helped his confidence.

He said: ‘ To have that in made me feel better because I felt like I appeared normal to strangers.

‘The prosthetic eye can’t be taken out too often, but I aim to remove it every two months and I have to have it polished once a year.

‘Then it will need completely replacing every five years.

‘Putting it simply, I don’t have an eye now. I’ve lost something that I was born with.’ 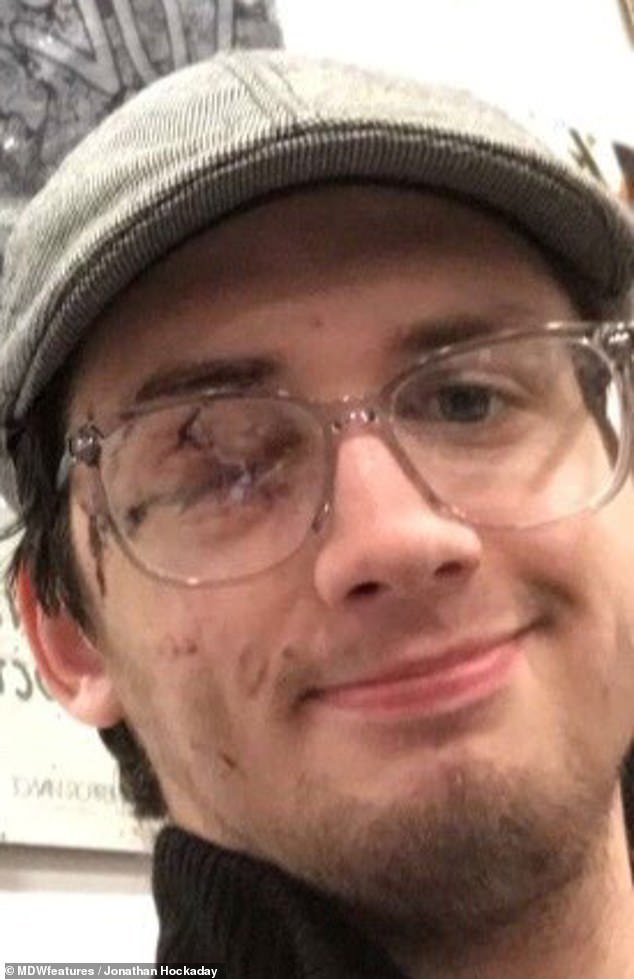 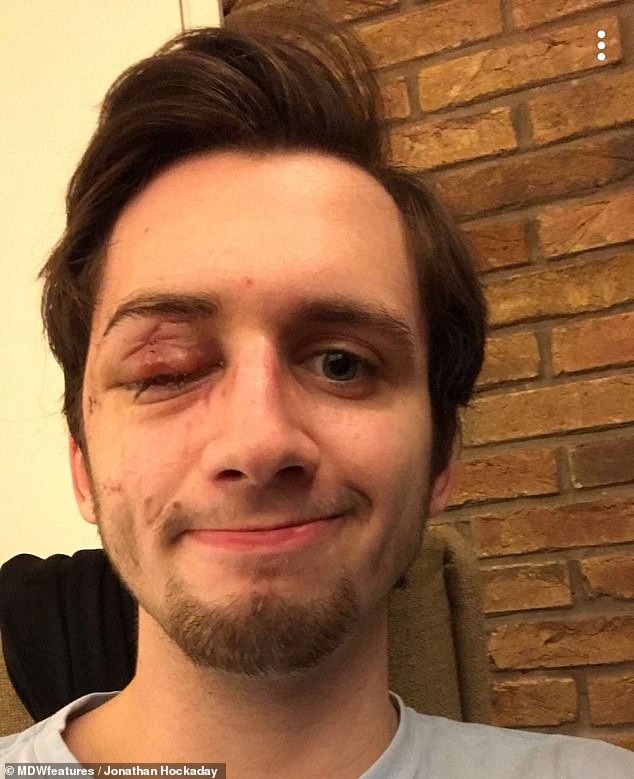 Day-to-day life is more challenging now for the office worker, who is trying to adapt to life without binocular vision.

He said: ‘I’ve had to approach everyday tasks with a new perspective and change how I do them to accommodate for the loss I suffered.

‘My balance is off now because of the imbalance of my vision, so walking around is a conscious effort.

‘I also struggle to pick up and put down items and to catch now because of a lack of depth perception.’ Mr Hockady and his family started a GoFundMe page shortly after the attack occurred to help pay for the mounting medical bills, travel expenses and the prosthetic eye.

He said that knowing some of his bills would be covered by the kindness of strangers alleviating his stress enormoudly.

Mr Hockaday added: ‘Despite what I went through, of course I would still return to the UK because I love the country and the people there. I choose to focus on the people who helped me during that time and not to focus on the animal who did this to me. The UK will always be a second home to me.

‘I hope people remember the importance of staying strong. Your life can change drastically and unexpectedly but don’t let that get you down.

‘Always try to focus on the positives in your life, no matter what.’