American Pie’s Don McLean talks to ME & MY MONEY

The best financial move that singer Don McLean ever made was to fight for ownership of all his songs in the 1980s.

McLean, 76, who shot to fame in 1971 with hit song American Pie, told Donna Ferguson that he believes he is consistently one of the world’s top earners.

From September next year he will be performing a 50th Anniversary American Pie Tour around the UK. Tickets are available via donmclean.com.

Fortune: Don McLean, pictured in 1973, has made millions in royalties

My father taught me not to spend it. Given he never wanted me to spend it, I never had any, unless I worked for it.

The other thing my father put in my head was: don’t get into debt. Only buy what you can afford to pay for. My father had a white collar job. He was district manager for a local utility company in New York.

My mother didn’t work. She stayed at home, did the laundry, cleaned the house, made the food and went shopping.

Was money tight when you were growing up?

My father made a decent living, but all the money was spoken for. There wasn’t any money to throw away or fool around with. The play Death Of A Salesman is the story of my father.

He spent 30 years paying off a $7,000 mortgage and when he had paid it off, he burnt the mortgage deeds in an ashtray. As they caught fire, he said what they say in the play: ‘Now we are free and clear.’

And then, very shortly after that, when I was 15 years old, he died. My mother couldn’t afford to stay in the house. But I told her, ‘If you sell this house, I’m leaving and I’ll never speak to you again.’ So she decided to rent it out and I decided I was going to get out of there and do something with music.

No, because I never lived beyond my means and I never got into debt. I was always able to make a living from music. I would give lessons and do little shows, play at birthday parties and put on my own shows – anything to make a few bucks.

My song American Pie has been used in a couple of Chevrolet adverts and I have earned millions of dollars in licensing fees. I didn’t have to perform the song or do anything – except say yes to a whole lot of money.

What was the best financial year of your life?

Every year is the best financial year of my life because I do better as I age. But if I had to pick one year that was phenomenal, it would be 1971, the year American Pie was released. It went to number one and I went from being a nobody with nothing – I was broke – to earning more than a million dollars.

Of course, taxes and commissions took a lot of that money: 70 per cent or more. The first thing I did with my newfound success was to buy a house in Garrison, New York, which is a beautiful place to live.

I also gave my mother the money she needed to be able to move back into her home after years of renting it out. She stayed there until the day she died. So I overcame fate.

To battle for ownership of all my songs in the 1980s. I had to fight a number of people in court and finally won everything. I’d rather not put a figure on how much my catalogue is worth, but it’s large and lucrative. It’s possible it’s worth a nine-figure sum, so above $100million.

How much have you made from American Pie?

I don’t have any idea. I make money from all my songs. Of course, American Pie makes more than the others, but not that much more. In terms of my career, I have made an enormous amount of money over the past 50 years by any standard. I have always been in the top one tenth of 1 per cent of earners. I’m very thankful. 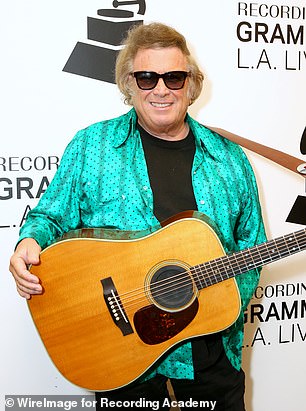 Back on the road: Don McLean starts a 50th anniversary tour next year

No. I used to. I started in 1972. Now, it’s paying out. I didn’t really think about whether saving into a pension was a good way to fund my retirement. I was making so much more money than I was putting into that little account. I never really thought of it that much. And then it grew and grew over the years, and got good.

No, I don’t any more. I don’t understand this market so I’d rather not be involved with it right now. In the past, I have invested in property and US government bonds which you used to be able to get a high yield from. Now, you can’t get anything on anything, so it’s a good time to sit back if you have money and not invest for a while, and watch what’s going on.

Oh yeah. I have four homes. Two are in Maine: one of them is a huge estate with 20 bedrooms, five kitchens, a swimming pool and 175 acres. It has blueberry fields.

That’s where I keep my horses. I got it very cheaply 30 years ago and it’s worth a lot of money now: a medium eight-figure sum in dollars. I also have two homes in Palm Desert, California, a really nice house and a condo.

I would stop giving people money for nothing. I’d ease them out of it, I wouldn’t stop cold. I’d give them a six or an eight-month plan and say: ‘We’re going to continue to do what we’ve done during the pandemic, but the money is going to decrease by 15 per cent every month until it comes down to zero. And by that time, you’re going to have to have a job.’

Then these people will have time to realise they had better get off their asses and start to look for work because there is so much work around – in America, companies can’t get anybody to take the jobs.

To be independent. I do not ever want to rely on anybody. I value my financial freedom too much.