An American woman had to fight for custody of her biological son when she became pregnant with twins while being a surrogate for a Chinese couple.

Jessica Allen of Perris, California, was doing In Vitro Fertalization (IVF) for the Lius (named for the sake of the article) in April 2016, nearly a year after giving birth to her second son with Wardell Jasper, 34.

And after engaging in intercourse with Jasper – claiming the use of a condom – Allen returned to the hospital to discover she was pregnant with twins.

‘Not once during the pregnancy did any of the medical staff provided by the agency say that the babies were in separate sacs,’ she said to the New York Post.

‘As far as we were concerned, the transferred embryo had split in two and the twins were identical.’

Jessica Allen (center) became a surrogate for a Chinese couple after the birth of her second child, Jarius (center right). And after engaging in intercourse with Wardell Jasper (left)- claiming the use of a condom – Allen returned to the hospital to discover she was pregnant with twins. She was naturally pregnant with her own child (bottom left) along with the Lius’s through an extremely rare medical incident called superfetation

But what they would all soon find out was that the at-the-time mother of two was naturally pregnant with her own child along with the Lius’s through an extremely rare medical incident called superfetation.

Allen had first decided to become a surrogate in fall of 2015, six months after the birth of son, Jarius.

”This is your chance to give a family the blessing of a child,’ Wardell told me,’ added Allen, who is white.

‘Besides, I wanted to stay at home with my sons rather than return to my job as a senior caregiver, and we decided we’d put the money toward buying a house.’

Working with San Diego-based agency Omega Family Global, she was paired with the Lius and followed along with the scheduled routine until she found out she was expecting double at the six-weeks scan.

She said: ‘I was a bit scared, but I heard the Lius were thrilled to be having twins.

‘My $30,000 payment, including expenses — which I received in installments by check each month — was increased by $5,000 for the second child.’

Allen gave birth to both boys at 38 weeks on December 12, 2016. She recalled that Mrs Liu, who was in the delivery room, was worried about the decision to have a C-section birth. 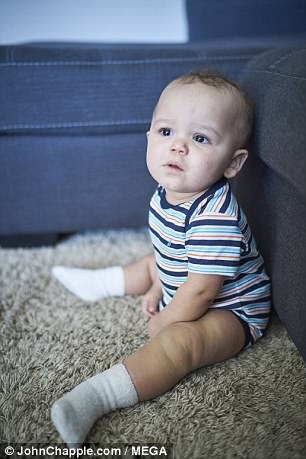 After spending $3,000 in legal fees, Allen was able to get the money that they ‘owed’ to the couple reduced to zero. On February 5, Allen was finally reunited with her baby when she met an Omega caseworker in a Menifee, California, Starbucks parking lot

And while Allen tried to be comforting to the woman, she was upset to not be given the chance to see the babies after giving birth to them.

‘I didn’t even get a look at the babies when they were pulled out because it was done behind an opaque screen,’ added Allen.

‘They were taken from the operating room before I had a chance to see them.’

Communication was sketchy but on January 10, days before moving into their new home, Allen received a WeChat message and picture from Mrs Liu that said ”They are not the same, right?’ followed by, ‘Have you thought about why they are different?”

Both babies were still in California at the time, so a DNA test was conducted where it was discovered that one of the boys – named Max – was actually biracial and belonged to Allen and Jasper.

To their additional horror, Allen said that the agency was prepared to give her son to another family and/or allow the Lius to put Max up for adoption since they were his legal parents.

‘We want our son,’ asserted Allen who was was furious that the caseworker at Omega requested another $7,000 for the difficulties she endured in taking care of the baby.

After spending $3,000 in legal fees, the couple were able to get the money that they ‘owed’ to the Chinese couple reduced to zero.

According to the New York Post, Omega’s CEO, Dr. Kyle Kramer said that the company would pay the expenses for the Lius.

But because of nondisclosure agreements and federal patient privacy laws, the firm can’t get into more detail about the claims for Allen they are disputing.

Their company lawyer did add, however, that the company ‘takes great pride in the care, attention and support that is given to all surrogates.’

On February 5, Allen was finally reunited with her baby – now named Malachi – when she met an Omega caseworker in a Menifee, California, Starbucks parking lot.

Allen and Jasper got married in April and enjoy the new life with their three boys.

She added: ‘I don’t regret becoming a surrogate mom because that would mean regretting my son.

‘I just hope other women considering surrogacy can learn from my story. And that a greater good will come out of this nightmare.’

While only legal in a few states, consumer surrogacy saw nearly a 100 percent increase from 2004 to 2008 of 738 to 1400 babies, according to recent reports from the Centers for Disease Control and Prevention and the Society for Assisted Reproductive Technology.

But, since not every surrogate birth is reported, it is unknown how many babies are actually born using the method.

Consumer surrogacy is illegal in china.