Americans are too fat to fight crime, war and fires

About 26.5 percent of young people in Colorado are ineligible to serve in the military due to their weight, a new report from the Council for a Strong America found.

The childhood obesity epidemic is cause for concern for the future of the US military and industries with fitness requirements, like law enforcement and firefighting.

About 14 percent of American high school students were obese in 2015, according to the most recent data available from the Centers for Disease Control and Prevention (CDC).

The Council for a Strong America, a nonprofit organization, cautions that the obesity epidemic coupled with other ineligibility factors render a high percentage of youth in even the nation’s ‘fittest’ state, Colorado, unqualified to serve in the military.

A new report found that weight was the leading cause for Colorado youth to be ineligible for military service. The Council for a Strong America report says that across the nation, 71 percent of people between 17 and 24 are not fit to serve, including the 14 percent of American high school students who are categorized as obese

The report found that a staggering 70 percent of people between 17 and 24 years of age in Colorado are ineligible to serve based on obesity, lack of education, or their criminal records.

The report also said that 71 percent of people in that age group across the nation are unfit to serve.

The Council suggests that the risk to the nation’s military recruitment underscores the importance of policies and physical fitness mandates to get the weight problems of American children under control.

Colorado is one of four states in the country that has no government-mandated physical exercise (PE) classes in schools. Colorado is a ‘local control state,’ says Michael Cooke, Colorado state director for the Council for a Strong America. This means that each school district decides whether or not require PE.

State-level attempts to mandate PE have been unsuccessful, and he and the Council don’t believe that state requirements for less structured physical activity (which include recess) are sufficient to ensure that Colorado children are healthy enough to serve in the military. 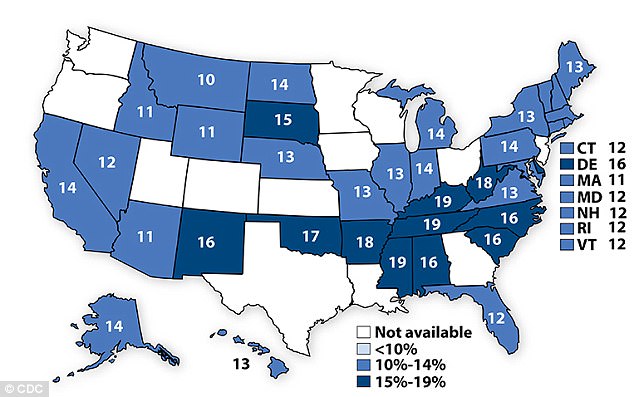 An overwhelming number of states in the US reported that more than 10 percent of high school students are obese, according to 2015 data from the CDC. The Council for a Strong America reports that the rate of young overweight and obese people in Colorado indicate that the military could face personnel shortages because too many are too fat to fight

This is particularly concerning to the state, which has one of the largest numbers of active-duty military personnel of any state in the US.

The report focuses on ‘mission readiness’ that will keep the opportunity to serve in the military open to young people, but Cooke says that the Council’s goal has more widespread benefits.

‘In Colorado, we have an opportunity to make policy changes that will help kids to be citizen-ready,’ whether they choose to serve in the military or not.

‘We want to help kids from an early age. They may not choose military service, but we want them to have a healthy start, so they can be productive members of society,’ says Cooke.

Last year, the military disclosed that about 7.8 of its troops are overweight, a number that it reports has been climbing sharply over at least the past 5 years. The Defense Health Agency’s report found that obesity was particularly problematic for women and for black, Hispanic and older service members.

‘It gets extremely dangerous when you can’t keep up with the rest of the pack,’ retired Command Sgt. Maj. Terrance McWilliams told the Colorado Springs Gazette. ‘You are putting your fellow comrades at greater risk.’

Obesity is also a major risk factor for additional and more serious cardiological and respiratory issues, as well as diabetes.

All of these affect workplace productivity, and could slow a service person down, or make them unable to serve, even if they were initially admitted to the military.

Cooke worries that our overweight youth will not be fit to replace the retiring military population, but his concern doesn’t stop there. Professions like law enforcement and fire fighting also provide vital civil services and require physical fitness.

Unlike the military, fire and police departments do no necessarily have specific body mass index (BMI) requirements, but candidates still have to pass rigorous physical fitness tests.

Research suggests that somewhere between nine and eleven percent of firefighters are severely obese, according to a report published last year on firerescue1.org. The report linked these rates to on-the-job cardiac problems and injuries that led to work absences.

A 2014 study from the Houston School of Public Health found that as much as 70 percent of the firefighters in its study were obese or overweight. Another study, done in 2011 found that obese firefighters were five times more likely to miss work due to an injury.

An FBI report found that eight out of ten police officers were overweight as well, a number that will only grow with the number of overweight youth applying to the force.