Americans’ life expectancy dropped another 0.3 years in 2021 while many other major nations saw rebound after pandemic drop in 2020

The average life expectancy of Americans dropped once again in 2021, even as other peer nations rebounded during the second year of the COVID-19 pandemic.

Research led by the University of Colorado and Virginia Commonwealth University gathered life expectancy data from the United States and 19 other nations from 2020 and 2021.

Nearly every nation had its life expectancy drop in 2020, as COVID-19 tore through a world that was unprepared for it.

Things rebounded in 2021 for almost all of them, though, as more effective treatments and the COVID-19 vaccines led to a decrease in virus mortality.

The U.S. did not get a similar bump, though.

Life expectancy dropped for Americans in both 2020 and 2021, with white Americans suffering the largest drop

‘Compared to its peers, the US experienced much higher mortality rates and larger drops in life expectancy in both 2020 and 2021,’ researchers wrote.

‘…The gap between US life expectancy and the peer average rose to more than 5 years in 2021, further deepening a US disadvantage in health and survival that has been building for decades.’

Researchers, whose findings are still in pre-print and pending peer-review, gathered data from European nations, the U.S., New Zealand and South Korea for the study.

All but four countries experienced a decline in life expectancy from 2019 to 2020, though only two – other than the U.S. – suffered a decline in 2021, Israel and New Zealand.

South Korea was the only nation where life expectancy increased in both 2020 and 2021, with the average resident expected to live 83.65 years.

America and Israel are the lone countries to experience declines in both years.

While the arrival of the COVID-19 vaccines in late 2020, and their widespread adoption by mid-2021 in many developed nations, saved millions of lives, many Americans were hesitant to get the shot, leaving them vulnerable to the virus. 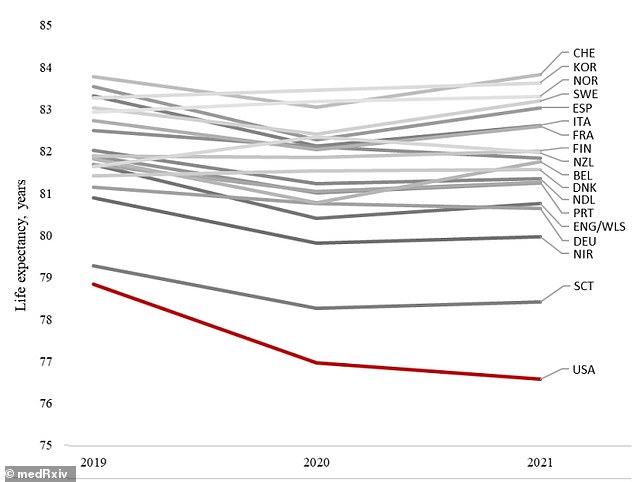 Americans by far have the lowest life expectancy among highly developed nations, with the pandemic exacerbating the issue due to vaccine hesitancy

‘Although the introduction and availability of effective vaccines were expected to curb US mortality rates in 2021, slow vaccine uptake and the spread of the Delta variant produced large surges in mortality,’ researchers wrote.

The most worrying finding by the researchers was just the general gap between the U.S. and the rest of the developed world in life expectancy.

The 76.60 average years of life for the average American is by far the lowest total in the study.

Scotland has the second lowest life expectancy of the 20 countries, but its 78.43 average years of life is still nearly two years longer than Americans’.

Switzerland had the longest average life-expectancy of those included in the study, at 83.85 years of life, followed by South Korea, at 83.65 average years.