The first COVID-19 death in America was that of a seemingly healthy 57-year-old woman who died three weeks before the first fatality was officially recorded.

Patricia Dowd died at home on February 6 in Santa Clara County, which takes in San Jose and is just south of San Francisco and the Bay Area, but her death went unreported as a coronavirus death because she was not tested.

According to her relatives, she had been suffering flu like symptoms for a few days before her death but had recovered.

They chalked her death down to a heart attack but were confused by it because she exercised regularly, did not smoke and watched her diet.

They also say she had no underlying health conditions.

Until now, the first known case was in Washington State on February 29.

Dowd worked as a manager for a semiconductor company. On the day of her death, she was working from home and had corresponded with a colleague at around 8am.

Her brother, Rick Cabello, said it was unusual for her to become ill.

‘She wasn’t feeling well, which was very unusual for her. I remember her specifically saying “‘I’m not feeling well,”‘ he told The Los Angeles Times.

He said she was a frequent traveler but had not been anywhere before her death.

‘Where did this come from if it wasn’t her traveling? Patricia may not be the first. It’s just the earliest we have found so far,’ her brother-in-law, Jeff Macias, said.

The cause of Dowd’s death was announced on Wednesday by Dr. Sara Cody, health director in Northern California´s Santa Clara County. 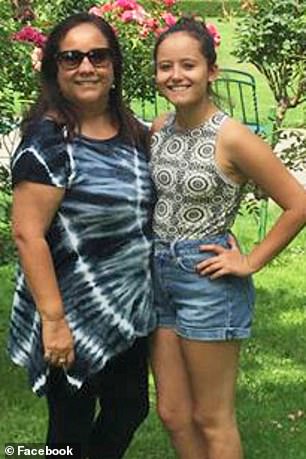 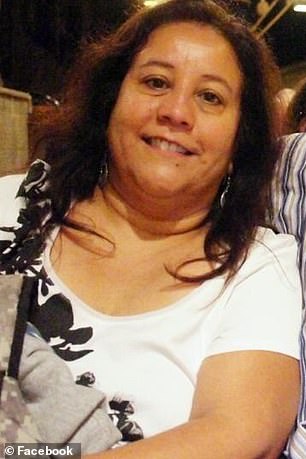 Patricia, seen left with her daughter who is now a college graduate, was in good health, according to her relatives. She was found dead at home two hours after sending an email to a colleague 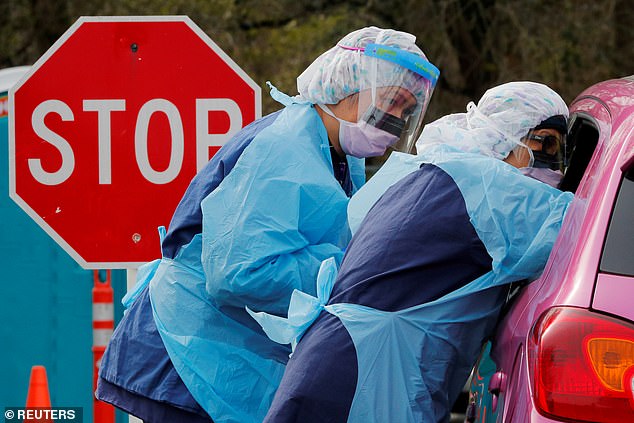 Nurses give drive-thru tests to a patient in Seattle, where the first death was presumed. It has since emerged that three people in Santa Clara County in California died before then

She said they were missed because there was not enough testing at the time they occurred.

‘If we had had widespread testing earlier and we were able to document the level of transmission in the county, if we had understood then people were already dying, yes, we probably would have acted earlier than we did, which would have meant more time at home,’ Cody said.

The CDC came under immense scrutiny for its slow response to the virus which meant that sick people could not get access to tests for weeks.

In the wake of the disclosure, Gov. Gavin Newsom said he has directed coroners throughout the state to take another look at deaths as far back as December to help establish more clearly when the epidemic took hold in California.

He declined to say whether the two newly recognized deaths would have changed his decisions about when to order a shutdown. He imposed a statewide one in late March.

The first known death from the virus in the U.S. was reported on Feb. 29 in Kirkland, Washington, a Seattle suburb. Officials later attributed two Feb. 26 deaths to the virus.

The two newly reported deaths show that the virus was spreading in California well before officials realized it and that outbreaks were underway in at least two parts of the country at about the same time.