Ellie Kemper pushed her Golden Buzzer for Light Balance Kids on Tuesday’s episode of America’s Got Talent sending them straight to the live shows in Hollywood.

Calling their inventive blacklight dance act ‘the definition of a spectacle,’ she joked: ‘I just wish there were some guarantee to get you guys through to the live show. If only there were one sure-fire way we could get you there.’

‘Oh wait, there is!’ Ellie, 39, remembered, pressing the buzzer, as the kids alternately wept and jumped around the stage.

Guest judge: Ellie Kemper served as a guest judge on Tuesday’s episode of America’s Got Talent for the third round of Judge Cuts

The nine-member group, made up of children aged 11 to 13, used light-sensing suits to create a fast-paced dance against a totally dark backdrop, depicting robots and basketball players in a constantly changing cityscape.

Hailing from the Ukraine, and living with the reality of war, some of the group’s young members had been forced to leave their homes and families behind, so being in America was ‘a dream come true,’ they said.

‘Our plane was nicer than a house,’ one of the children explained before they performed. ‘We could live there.’

The group was an offshoot of Light Balance, the AGT act with a similar routine that placed third in season 12. 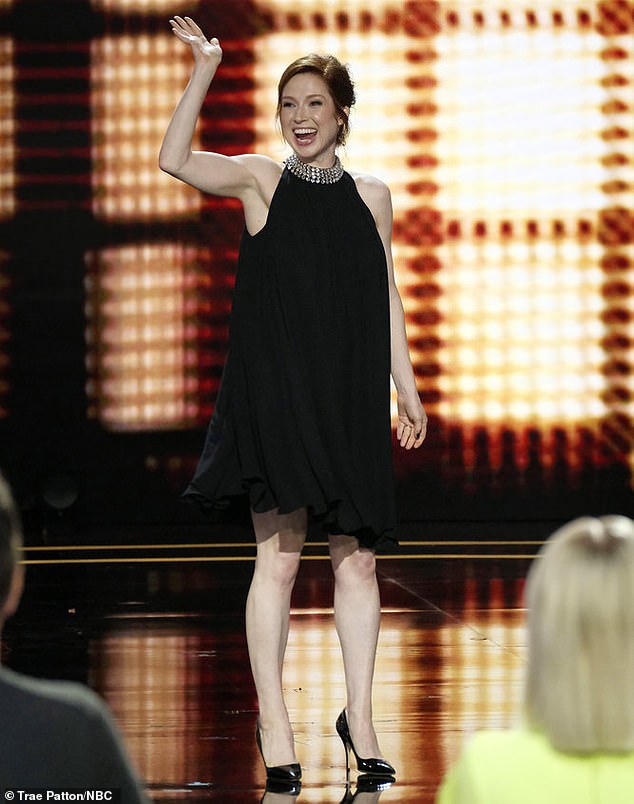 Fan favorite: The 39-year-old actress received a warm welcome from the audience 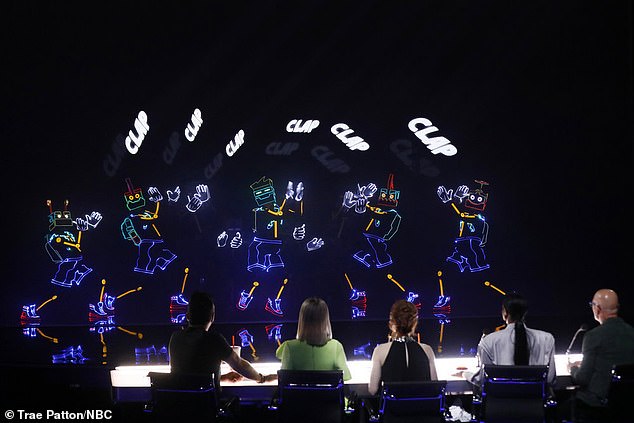 Judge Julianne Hough, 31, liked them better than the original, as did her fellow judge, Howie Mandel, 63.

‘I would go pay to see this in Vegas,’ he said. ‘I would see this at a live concert. I love you guys!’

Only seven of the 18 acts performing on AGT’s third Judges Cuts round would go forward and the competition was fierce. 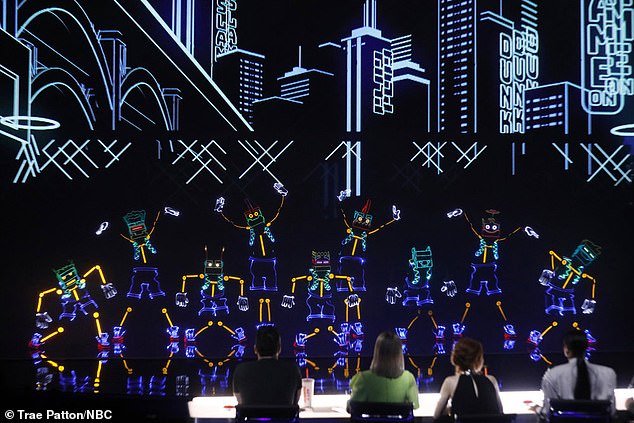 Spectacle definition: Ellie called their performance the ‘definition of a spectacle’ as she pressed her Golden Buzzer sending them straight through to the live show in Hollywood 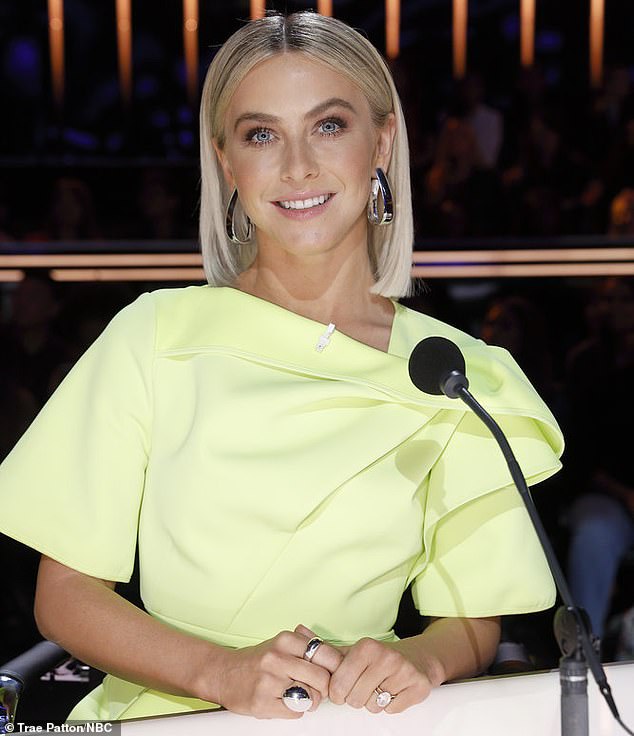 First up was comedian Greg Morton, whose vocal impressions were inspired by the sets at Universal Studios, where the show was being filmed.

Greg, who had been making people laugh since he was a kid on the school bus, still worried where his next gig was coming from. He said really needed the show to work out.

His new act featured a cast of famous film characters, from E.T., Gandalf, Gollum and Batman to Gremlins’ Gizmo, Scarface’s Tony Montana and Back to the Future’s Doc Brown. 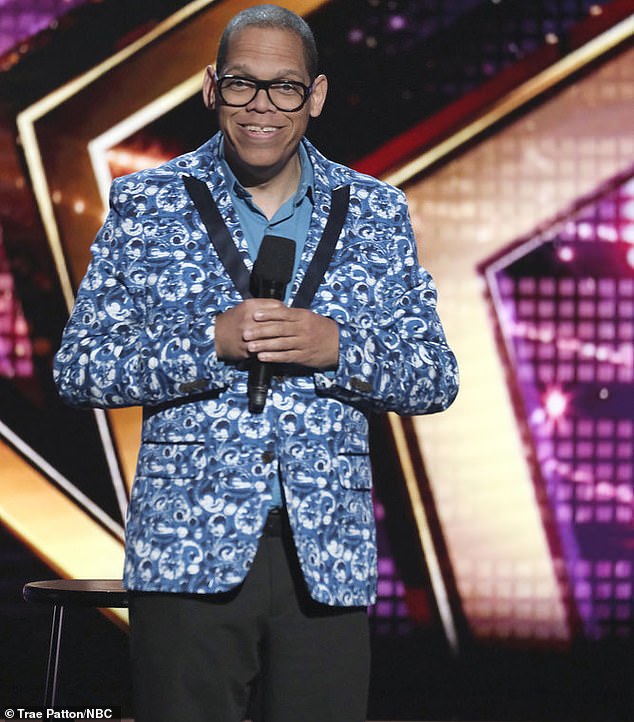 ‘It was like In Memoriam,’ Ellie said, referring to the Oscars tribute to recently deceased celebrities. ‘But upbeat and at lightning speed.’

‘I want him to do well so badly,’ judge Simon Cowell, 59, confessed. 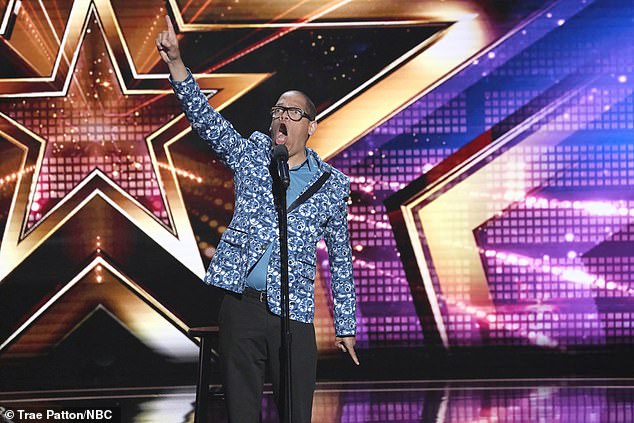 Good times: The entertainer had the crowd roaring with his impressions 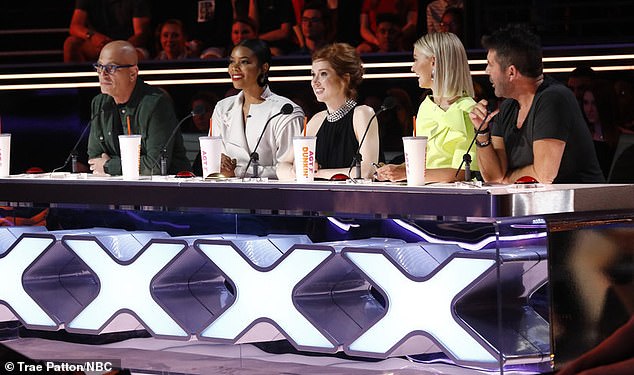 Carmen Carter, a ‘background singer that can sing her face off’, according to judge Gabrielle Union, 46, was next.

‘In my early twenties, I really had dreams of being a star, but I just couldn’t go to that next level,’ confessed the 55-year-old entertainer, who had been held back by her age.

Her high-octane rendition of The Beatles 1969 hit Come Together earned her a standing ovation. 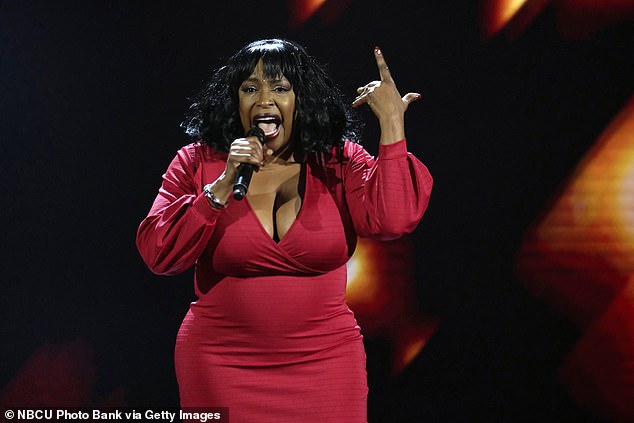 ‘Carmen Carter! Remember that name!’ she shouted at the end.

‘I broke my chair in a fit of ecstasy,’ said Ellie, whose chair really did come apart. ‘I sank to the ground. That was unbelievable.’

Simon urged her to do more than just covers.

Illusionist Nicholas Wallace brought host Terry Crews, 51, to the stage, asking him to mentally ‘project an image’ of a location. 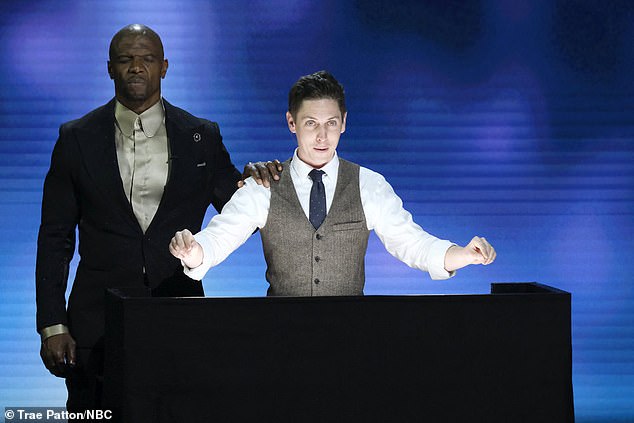 Mind reader: Illusionist Nicholas Wallace brought host Terry Crews, 51, to the stage, asking him to mentally ‘project an image’ of a location

As Terry thought, Nicholas drew and ended up with a picture of the Statue of Liberty, the site his ‘assistant’ envisioned.

‘I thought it was quite boring, actually,’ Simon said, as his fellow judges agreed that the presentation was lacking.

Ray Underwood, 61, and his seven-year-old dog Magic performed an equally lackluster dance act that made Simon ‘switch off.’ 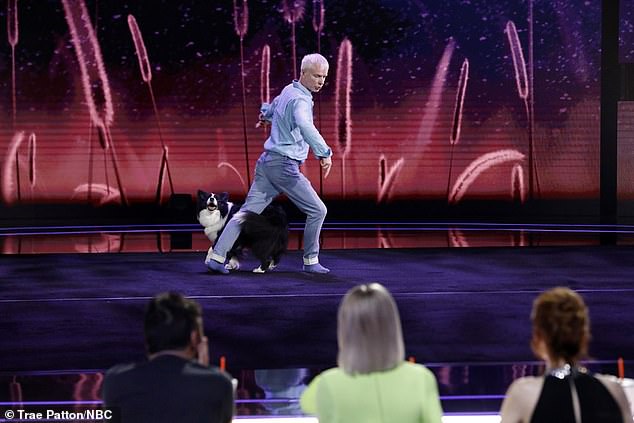 Dog act: Ray Underwood, 61, and his seven-year-old dog Magic performed a lackluster dance act that made Simon ‘switch off’

Gonzo, a hilariously silly tambourine player from Japan, got everyone excited again.

He even had his own dedicated cheering section in the crowd.

‘When Gonzo plays, he and the tambourine become one,’ his translator said, explaining that he would be stepping up his performance by bringing ‘traditional karate moves.’ 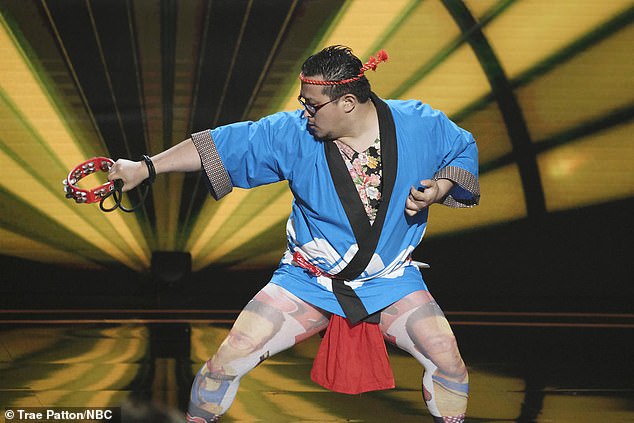 As a cover of Bonnie Tyler’s 1984 song ‘Holding Out for a Hero’ played, Gonzo kicked his instrument, pretended to throw it and beat himself with it, and used it as a dance weapon.

Revolution, The Queens of Malambo, wowed them, too. 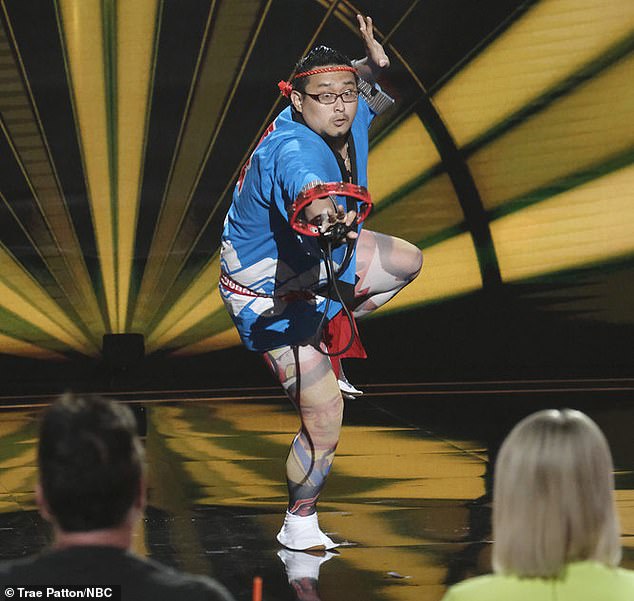 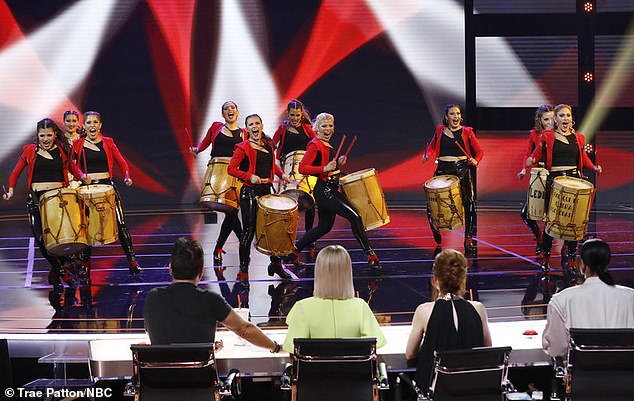 Nailed it: Revolution, The Queens of Malambo, wowed the judges and audience also

The Argentinean drums-and-dance troupe, made up of women aged 17 to 29, used fire, whips and high heels to pummel the stage into submission, to great effect,

‘You literally lit the stage on fire,’ said Gabrielle. ‘I am woman, hear me roar.’ I absolutely loved it.’

Simon praised it, too, calling it ‘unique’ and ‘powerful.’ 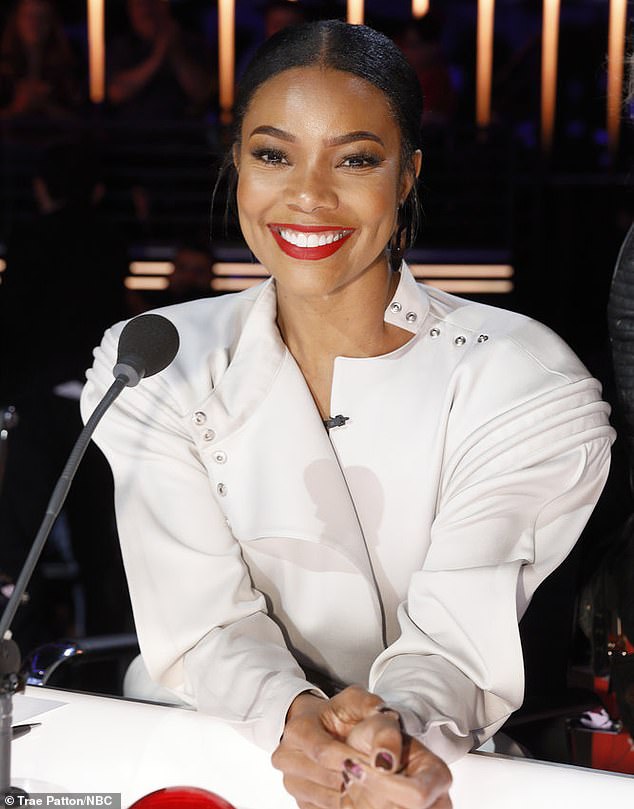 On fire: New judge Gabrielle praised the Argentinean drums-and-dance troupe made up of women aged 17 to 29

Marcin Patrzalek, 18, missed his high school graduation in Poland to keep trying out for AGT.

He hoped his new, flamenco-inspired acoustic guitar performance would blow the judges away.

With his fingers flying over the strings, he bent notes every which way, blasting new sounds out of the instrument and making it sound like a full band. 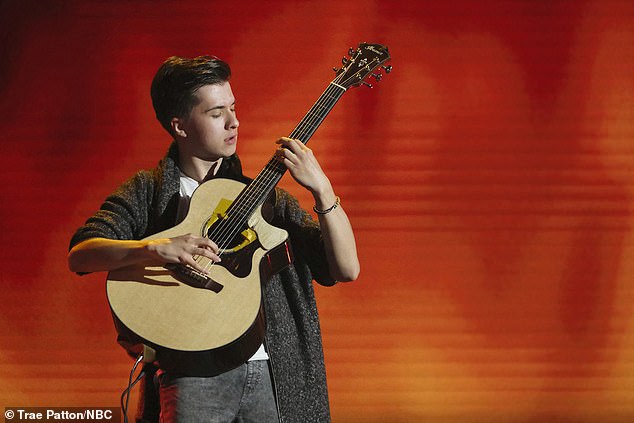 ‘You have just witnessed greatness!’ Terry shouted, as Simon called him ‘one of the best’ musicians he’d heard.

Julianne thought he could win the whole thing.

‘You are unique and dynamic and explosive, and you did not disappoint, young man,’ Gabrielle said. ‘Way to go!’ 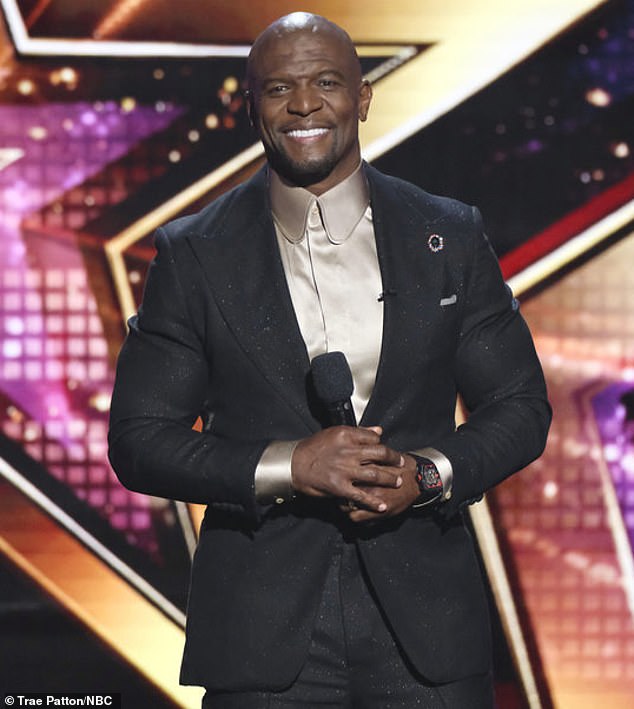 South Carolina’s Ansley Burns, 12, was interrupted during her last audition when the backing track overwhelmed her voice.

‘I want to make sure it sounds perfect, because I don’t want to be stopped again,’ she said.

Her version of Carrie Underwood’s 2012 tune ‘Good Girl’ still didn’t work for Simon, who halted her, noting that the track was once again smothering her vocals. 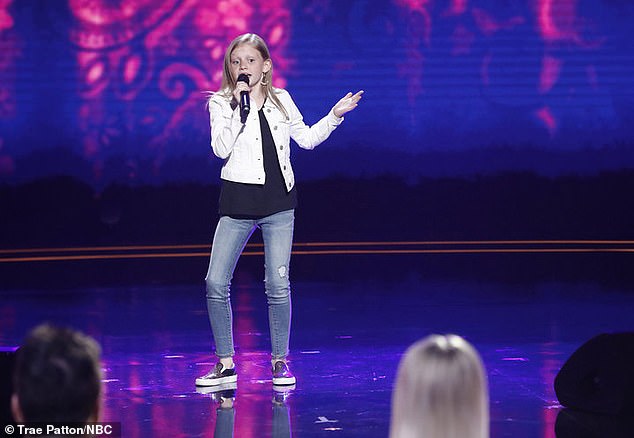 Young singer: South Carolina’s Ansley Burns, 12, was stopped and asked to perform a cappella by Simon

She performed the rest of it a cappella, sounding far more impressive.

‘I think you’ve got something special about you,’ Simon reconsidered.

Stephanie’s Child, a three-person singing act with drag performers, challenged Simon to like them after he previously called them ‘terrible.’ 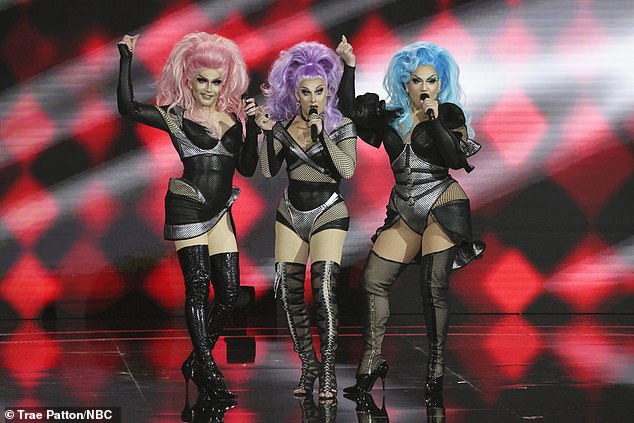 Their mash-up of Demi Lovato’s Sorry Not Sorry and Confident still garnered them an X from the judge, but the audience was on its feet.

‘We’re gonna fight to make sure you’re one of the six spots that go to the live show,’ Howie said.

Nick and Lindsay, an opera singer-and-sideshow-act from New Orleans, said they would be ‘pushing’ their vocals and danger for the judges. 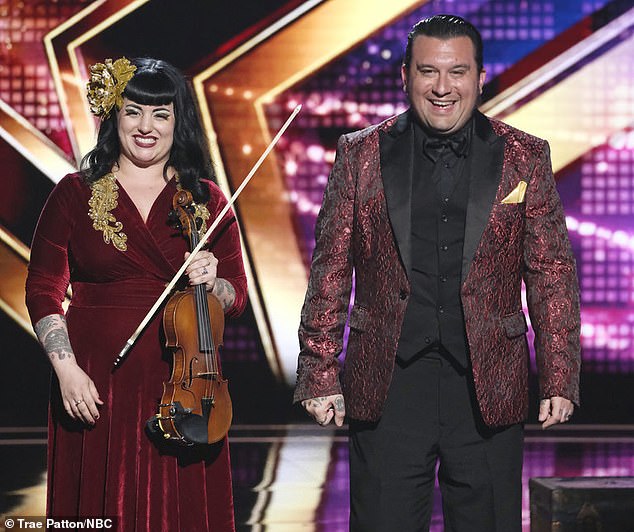 Unique act: Nick and Lindsay, an opera singer-and-sideshow-act from New Orleans, said they would be ‘pushing’ their vocals and danger for the judges

As Nick sang The Music of the Night from Phantom of the Opera, he put a string of razor blades in his mouth, and Lindsay pulled them out with her toes.

Then he lay down on a bed of nails with a concrete block on his chest as she broke the block with a sledgehammer on fire.

Finally, Lindsay threw knives at him upside down and backward as he finished the song, which she accompanied on violin. 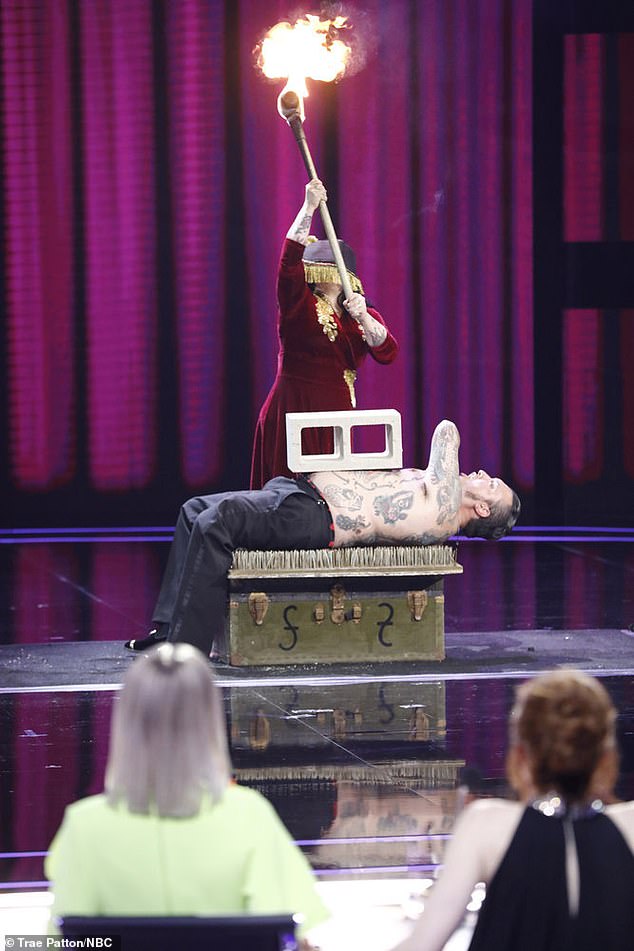 Dangerous moment: The judges looked on as Nick & Lindsay performed their dangerous and musical routine

‘You’re fun and you’re dangerous and you’re scary and you upped the ante, and I’m here for it,’ Julianne said.

‘None of it’s great, but collectively it’s fantastic,’ Simon added. 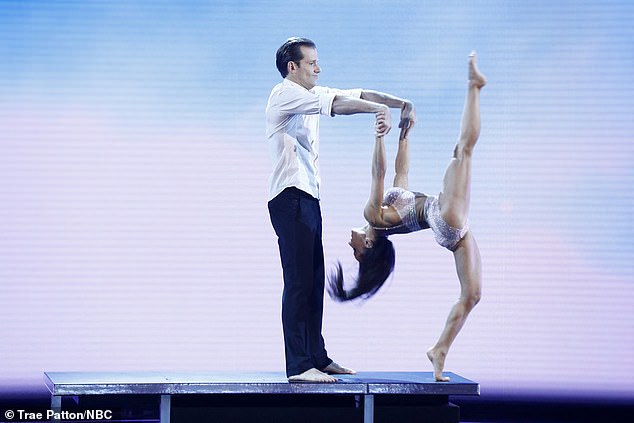 He also called elderly Brazilian acrobats Edsel and Leon ‘one of the strongest, most athletic acts I’ve ever seen.’

Yet he seemed more entranced by Melissa Arleth, 40, and her pet rat Maracilla.

Maracilla ran through a cardboard bagel, tore up a ramp, pressed a lever, and headed through a paper subway to cross Melissa’s body and reach the Brooklyn Bridge on a New York City-themed set. 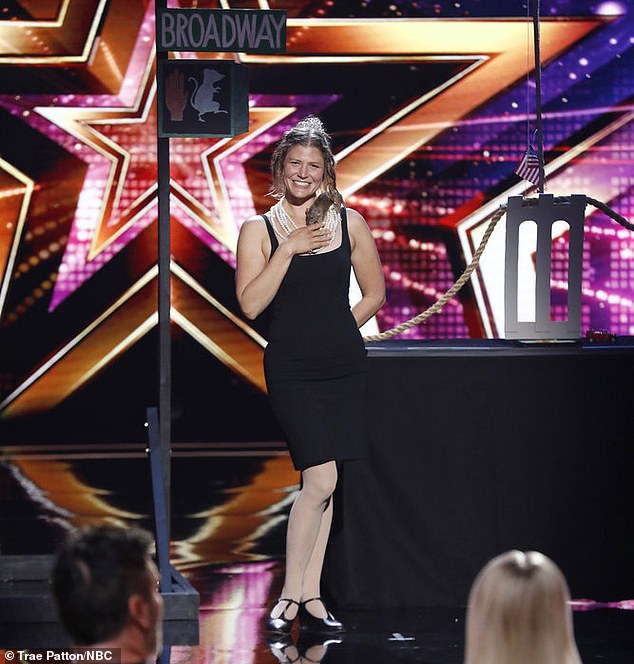 ‘People all over America are going to fall in love with my rats,’ Melissa vowed.

Maracilla ran down the front of her shirt. 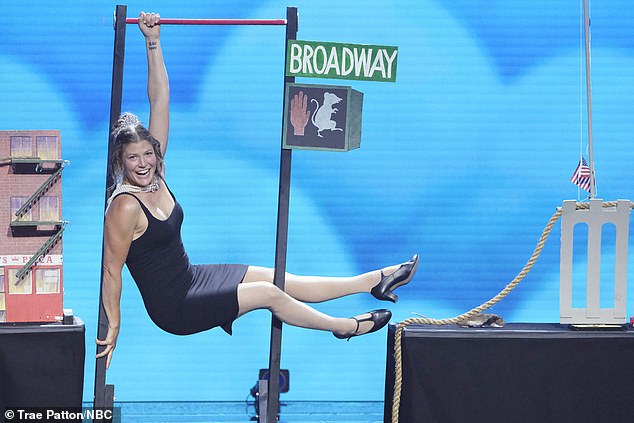 Big finish: Maracilla ran down the front of Melissa’s shirt during the routine

Soulful singer MacKenzie, 31, survived a vocal hemorrhage in 2017, but you couldn’t tell it from his performance on AGT.

‘I want to be heard by the world,’ the young man said.

His deeply felt rendition of Journey’s 1983 classic Faithfully had the judges in awe and on their feet. 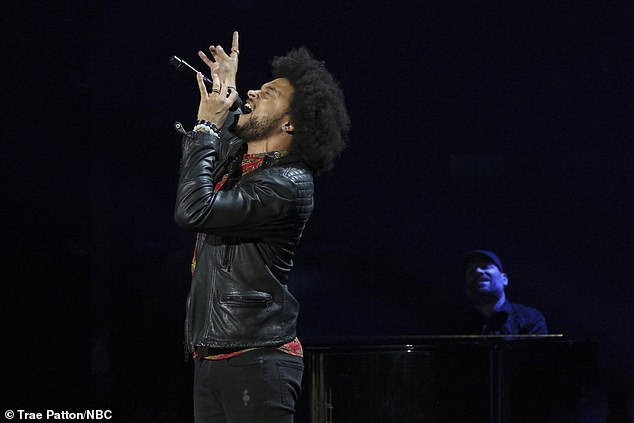 Soul singer: Soulful singer MacKenzie, 31, survived a vocal hemorrhage in 2017, but you couldn’t tell it from his performance on AGT

‘The joy with which you sang that song was undeniable, and it was raw and it was you,’ Ellie offered.

‘How could you criticize that?’ Simon asked. ‘I would say you’re the best singer we’ve had tonight.’

MacKenzie made it through the judges’ cuts, as did comedian Greg Morton, singer Carmen Carter, guitarist Marcin Patrzalek, tambourine fan Gonzo and entertainers Nick and Lindsay. 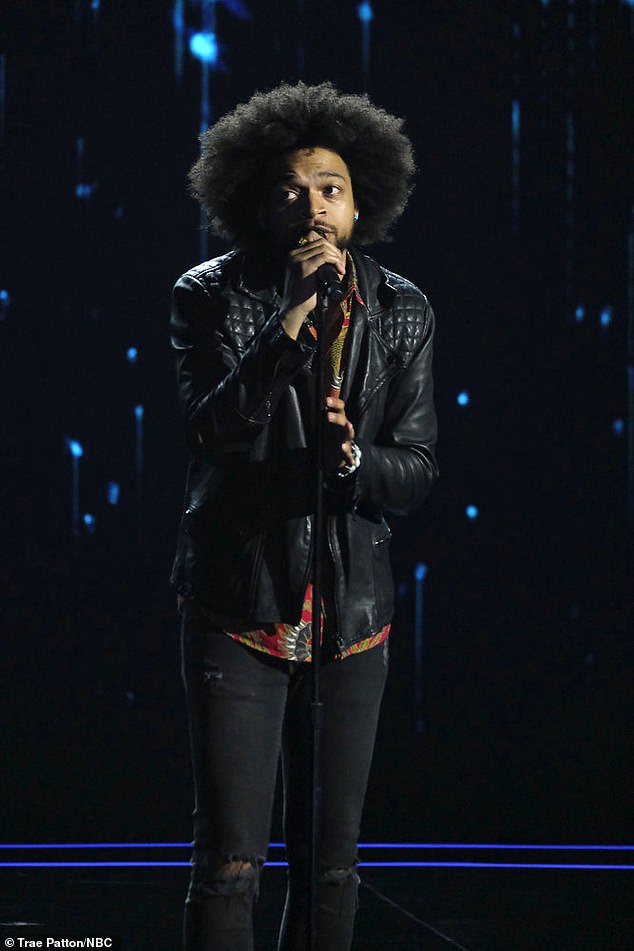 Made it: MacKenzie made it through the judges’ cuts, as did comedian Greg Morton, singer Carmen Carter, guitarist Marcin Patrzalek, tambourine fan Gonzo and entertainers Nick and Lindsay